After a lengthy legal battle, Mikey Garcia quickly re-established himself as one of the world's top boxers adding both a 135- and 140-pound championship to his trophy case. Read Bio

The Ford Center at The Star, Frisco, Texas 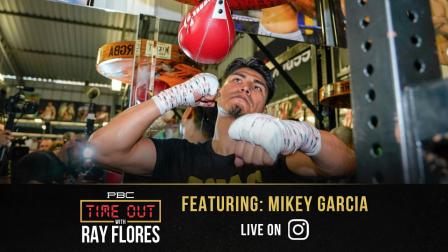 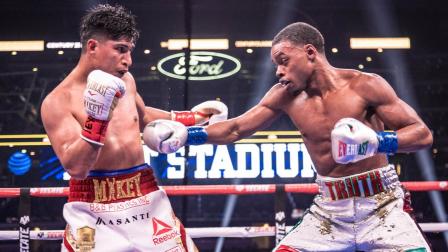 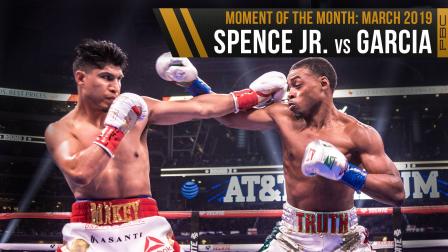 March 2019 Moment of the Month: Spence Jr. vs Garcia click here to get video transcript

Spence vs. Garcia: Truth or Dare

Mikey Garcia is getting what he always wanted

There are several reasons why Mikey Garcia chose to fight World Welterweight Champion Errol Spence Jr. Saturday night on FOX PPV, we’ll find out if he was right.

Errol Spence Jr. WINS against Mikey Garcia by UD in Round 12 of 12

Mikey Garcia WINS against Robert Easter Jr. by UD in Round 12 of 12

A husband and father with boxing in his DNA

Mikey Garcia and his wife of eight years, Fatima Garcia, have three children, the oldest being his daughter, Annjie, with two sons, Ryu and Django.

Mikey’s father and co-trainer, Eduardo, was a former amateur champion who later guided Fernando Vargas to a berth on the 1996 Olympics team and to become the youngest junior middleweight champion in history.

Boxing wasn’t necessarily going to be in Mikey’s future, but as a 14-year-old attending a show at a local gym, he stepped in as an adversary to a fighter who lacked an opponent for an exhibition.

The bug was planted from there for Garcia, who won his first 15 amateur fights and later the gold medal in the 2004 National Junior Golden Gloves Championships, the 2005 National Police Athletic League Championships, and made his professional debut as an 18-year-old with a decision over Domingo Herrera Mendoza in July 2006.

A 30-year-old boxer-puncher/counterpuncher, Garcia has long admired Floyd Mayweather Jr., and mostly eschewed what he considers to be the traditional Mexican “brawler” or “close quarters” style for a more cerebral Mayweather-like approach employing his defensive skills, power and range.

Garcia had won his first 20 fights—17 by knockout—by the time he graduated in January 2010 from The Ventura County Police and Sheriff’s Reserve Academy.

Garcia applied to the Sheriff’s department and spent six months there in classes, where he learned procedures on how to make arrests and search people, buildings and cars, before deciding to end his dream of becoming an attorney or a police officer in order to devote himself full-time to boxing.

The path toward stardom

At 23-0 with 19 KOs, Mikey won his 24th and 25th career bouts by stopping previously once-beaten Oliver Lontchi in the fifth round on December 4, 2010, and previously unbeaten Matt Remillard in the 10th round, flooring him three times in March 26, 2011.

Next was hard-punching Rafael Guzman, whom Garcia dropped and stopped in the fourth round June 4, 2011, igniting a run of four consecutive knockouts that would to lead to a definitive path toward stardom.

Garcia had a breakthrough performance on November 10, 2012, when he flattened Argentina’s rugged, former titleholder Jonathan Victor Barros in the eighth round, representing his eighth straight knockout victory and his 14th stoppage in 15 fights.

Barros was knocked out for the first time in his career after having lost his previous bout by unanimous decision to IBF junior lightweight titleholder Juan Carlos Salgado in August 18, 2012. Barros had split route-going bouts with former beltholder Celestino Caballero and gone the distance with unbeaten former featherweight titleholder Yuriorkis Gamboa, a Cuban Olympic gold medalist.

Garcia was next in action for the WBO featherweight championship in January 2013 at New York’s Madison Square Garden, earning the title with an eight-round technical decision over Orlando Salido, whom he dropped four times. Garcia followed Salido with a fourth-round knockout of left-handed ex-beltholder Juan Manuel Lopez on June 15, 2013, even as he lost the title on the scales, necessitating a rise into the 130-pound division.

Garcia’s junior lightweight debut required him to rise from a second-round knockdown to dethrone previously once-beaten WBO champion Roman “Rocky” Martinez by eighth-round knockout in November, 2013. Garcia stopped the Puerto Rican for the first time in his career, earning his second championship in as many different weight classes.

Having knocked out 10 of his previous 11 opponents, Garcia entered his first title defense against previously once-beaten two-time former title challenger Juan Carlos Burgos, who won a combined five rounds during a near shutout unanimous decision loss on January 25, 2014.

The king returns to the ring

Garcia ended a 26-month ring absence with a four-knockdown, fifth-round stoppage of former featherweight titleholder Elio Rojas in a 139-pound bout at Barclays Center in Brooklyn, New York, on July 30, 2016, having been sidelined due to a legal battle with his promoter.

Garcia vacated the 140-pound title and returned to 135, for a unification bout against undefeated IBF counterpart Robert Easter Jr. on July 28, 2018, at The Staples Center in Los Angeles.

He cemented his pound-for-pound status by dropping Easter en route to a unanimous decision win, making him the unified 135-pound world champion.

Always one to seek out challenges, Garcia decided his next goal would be to conquer the 147-pound division. On March 16, 2019, he took on undefeated IBF World Welterweight Champion Errol Spence Jr. in the first ever PBC/FOX Sports pay-per-view.

A crowd of 47,525 packed AT&T Stadium in Arlington, Texas, to witness the battle of undefeateds. Garcia was game but Spence was at the top of his, shutting the courageous Garcia out on all three cards to win a 12-round unanimous decision. Final scores were 120-107 and 120-108 twice.

"He came out here with a good game plan and kept the distance at his favor," Garcia said afterward. "I couldn't get my rhythm going and he did what he had to do. I tried to make adjustments and he kept executing.”

Garcia bounced back with a 12-round unanimous over Jessie Vargas in February 2020. Garcia started slow before turning it on, dropping the gutty Vargas in the fifth and hurting him several other times to win by scores of 116-111, 116-111 and 114-113.