Entering his second fight after a 2½-year layoff, Mikey Garcia promised that the best part of his career is yet to come. He sure got off to a great start to support that claim.

Garcia made quick work of defending 135-pound champion Dejan Zlaticanin with a third-round knockout to earn a world title in his third weight division.

Zlaticanin was making the first defense of his title, but it was Garcia who controlled the fight from the opening bell to the final punch, which knocked the champion out cold and ended the bout at the 2:21 mark of Round 3.

Garcia caught the Montenegro native with a right uppercut that sent him reeling, then he grazed the champ with a left hook before finishing him off with a crushing right cross that left Zlaticanin lying motionless on his back underneath the ropes and made an early case for Knockout of the Year.

Garcia, 29, won world titles at both 126 and 130 pounds in 2013, but a prolonged legal battle kept him inactive for 30 months following his 130-pound title defense against Juan Carlos Burgos in January 2014.

With the victory, Garcia improved to 7-0 with six KOs against current or former world titleholders, following up on his fifth-round TKO of former 126-pound champion Elio Rojas in his return to the ring last July.

Garcia stopped Orlando Salido to win his 126-pound title and knocked out Roman Martinez to earn his 130-pound championship, but he said his win over Zlaticanin was probably the best knockout of his prestigious career.

Garcia dictated the action from the get-go against Zlaticanin in Round 1 as he pumped his jab while working off his back foot effectively to nullify his southpaw opponent’s aggressiveness.

Garcia continued his dominance in the second round as he landed some solid left hooks to the body and successfully countered Zlaticanin, who had trouble finding openings against the Southern California native.

Zlaticanin, 32, was defending his title for the first time since becoming the first boxer from Montenegro to win a world championship. The southpaw earned the vacant title last June with a third-round TKO of Franklin Mamani in Verona, New York.

But Garcia, who outlanded Zlaticanin 50-16 in total punches, had little trouble defusing the fighter known as “Dynamite” with his dynamic boxing skills before ending the fight in astonishing fashion. 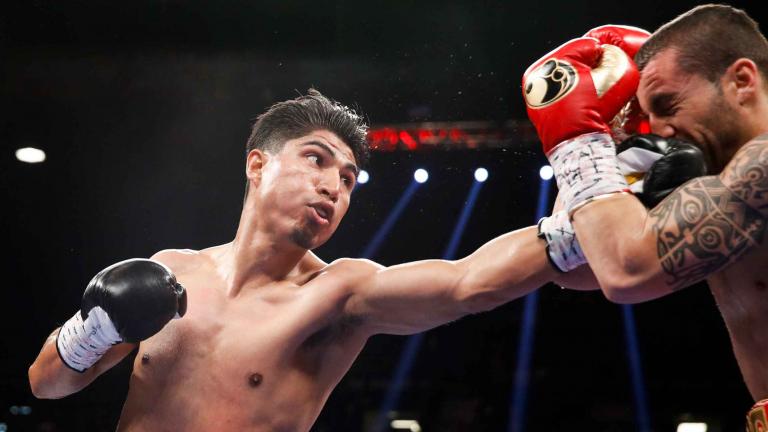 This week in PBC Jabs, host Jordan Hardy takes another look at the Frampton-Santa Cruz and Zlaticanin-Garcia world title fights, and chats with Sammy Vasquez Jr. before he faces Luis Collazo tonight on FS1.

Entering his second fight after a 2½-year layoff, Mikey Garcia promised that the best part of his career is yet to come. He sure got off to a great start to support that claim.

Garcia eager to test himself against 'dangerous' 135-pound champ Zlaticanin

Dejan Zlaticanin pulls no punches when predicting how he plans to end the first defense of his 135-pound world title against Mikey Garcia.