Head tilted slightly downward and eyes focused forward, Mikey Garcia seemingly saw nothing other than the obstacle in front of him: Adrien Broner. 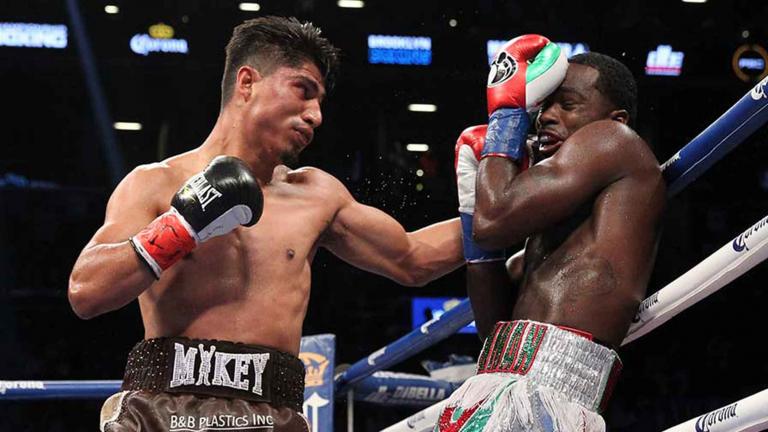 Mikey Garcia kept the pressure on Adrien Broner over 12 rounds and earned a unanimous decision in their 140-pound showdown at Barclays Center in Brooklyn, New York. (Ed Diller/DiBella Entertainment)

Moving up in weight to face “The Problem,” Garcia remained in constant control of their 140-pound showdown, turning in a dominating performance to earn a unanimous decision before a crowd of 12,084 at Barclays Center.

With his victory over Broner, a former four-division world champion, Garcia further elevated his status as one of the world’s best pound-for-pound fighters.

The 29-year-old Southern California native calmly dictated the distance between himself and Broner, and stayed in his opponent’s face for almost the entire fight. After a slow first round that Broner won on all three official scorecards, Garcia went to work as he began to pick apart his opponent.

Over the next several rounds, Garcia showed off an impressive arsenal as he used his jab to penetrate Broner’s high guard before slipping shots to the body.

By the latter rounds, it was all but apparent that Broner needed a knockout to win, but even then, Garcia was able to counter the Cincinnati native’s desperate attempts. In the end, Garcia easily prevailed by scores of 117-111 and 116-112 twice.

Garcia, who earned his 135-pound world title in January with a third-round KO of unbeaten champion Dejan Zlaticanin, said he would weigh his options before considering his next fight.

While Garcia has returned to a place among boxing’s elite after returning to the ring a year ago following a contractual dispute that kept him inactive for 30 months, Broner is left to ponder his future after losing for the second time in five fights and for the first time in his career at 140 pounds or less.

Head tilted slightly downward and eyes focused forward, Mikey Garcia seemingly saw nothing other than the obstacle in front of him: Adrien Broner.

With Adrien Broner coming down in weight and Mikey Garcia moving up for their 140-pound bout, the clash of talented multi-division champions makes for an intriguing matchup even without any world titles at stake.

This week in PBC jabs, host Jordan Hardy previews an action-packed weekend of fights, including a conversation with former 147-pound champion Victor Ortiz before his 10-round showdown Sunday night against Mexico’s Saul Corral on FS1.