After crossover roles in movies and on TV, former 147-pound world champion Victor Ortiz is determined to return to the top of the division. Read Bio 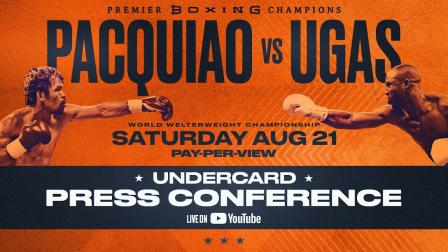 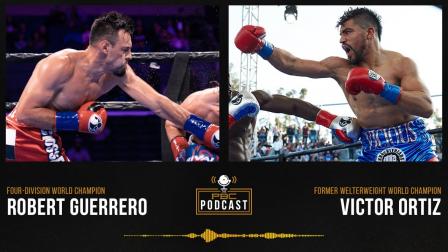 The smooth-boxing Cuban outboxes and out-brawls one of boxing's icons to retain his world welterweight title Saturday night on pay-per-view.

Former champs Guerrero and Ortiz discuss what they're fighting for as they prepare to throw down in a crossroads welterweight match Saturday night on the Manny Pacquiao-Yordenis Ugas card live on YouTube PPV and FOX Sports PPV.

Tickets for the crossroads battle that goes down at Citizens Business Bank Arena in Ontario, California go on sale tomorrow.

From the big screen to the squared circle, Victor Ortiz is one of the most famous boxers in the sport today. The former welterweight world champion is on the comeback trail and determined to regain the top spot in the 147-pound division.

FROM ABANDONMENT TO AMATEURS

Born the second of three children to Mexican immigrants in Garden City, Kansas, Victor Ortiz Jr. was seven years old when his mother left him, and, 13, when his alcoholic father did the same.

First, however, an 8-year-old Ortiz's father would take him to a local gym to learn how to box, this, after his son had been bullied by two of his peers during his early childhood. Ortiz and his younger brother, Temo, left Garden City and with their 16-year-old pregnant sister to live on their own for more than a year.

Shortly thereafter, at the age of 15, Ortiz and Temo moved in with their 18-year-old sister, who gained custody of them while living in Denver. Ortiz won the Ringside National Title in 2001 and 2002 and the National Junior Olympics in 2002.

In the 2003 Junior Olympic Nationals, Ortiz met Robert Garcia and former heavyweight contender, Ron Lyle, who assisted in guiding him as an amateur.

A 16-year-old Ortiz won the 132-pound division with a perfect 5-0 record, and later the Police Athletic League National title in Toledo, Ohio.

After reaching the semifinals of the United States Olympic Boxing Trials, a 17-year-old Ortiz debuted professionally in June 2004 with a first-round knockout of Raul Montes, representing his first of three stoppages among five victories that year.

Ortiz went 5-1 in 2005 -- the same year he became a legal adult and gained custody of Temo. The year included a pair of second-round TKOs and another in the first, with his lone loss in June coming by first-round disqualification for hitting his opponent while he was down.

"Raising your brother and having to provide and to become this grown man at an early age is definitely tough,” said Ortiz. “That forces you to grow up faster and stronger and to appreciate everything. I put it into my mind that, 'Hey, I'm going to be world champion one day.'”

The year 2007 opened with Ortiz battling to a draw with Marvin Cardona, who entered at 12-0 (8 KOs). But Ortiz closed the year with stoppages of his next four rivals, including a 10th-round TKO of title challenger Emmanuel Clottey (August) and a first-round knockout of former champion Carlos Maussa (November).

Ortiz was literally a knockout in 2008, which featured fifth-round stoppages of Dairo Esalas (May) and Robreto David Arrieta (September) and a second-round TKO of Jeffrey Resto (December). Resto entered at 22-2 (13 KOs) as Ortiz improved to 23-1-1 (18 KOs).

Ortiz stopped two of three opponents in 2009, sandwiching knockouts in the second and seventh rounds over Mike Arnaoutis and former champion Antonio Diaz in March and December around a sixth-round TKO loss to future champion Marcos Maidana (June).

Maidana rose to 26-1 (25 KOs) despite being floored three times, and Ortiz, twice, before Ortiz finally succumbed in their clash for the WBA’s interim 140-pound title.

“Vicious” went 4-1-1 (2 KOs) over the course of 2010 and 2011, the former comprising a 10th-round TKO of Hector Alatorre (February), a one-knockdown 10-round unanimous decision over over ex-titleholder Nate Campbell (May),  a third-round knockout of former belt holder Vivian Harris (September) and a draw with future champion Lamont Peterson (December), whom he dropped twice in the third round.

In an April 2011 bout featuring two knockdowns by each fighter, Ortiz dethroned previously unbeaten Andre Berto as WBC welterweight champion by unanimous decision only to lose that crown in September to undefeated Floyd Mayweather via fourth-round knockout and to be stopped, yet again, by Josesito Lopez in the ninth round in June 2012.

The Road Back To The Top

Ortiz rebounded from a TKO loss to former champion Luis Collazo in January with a third-round TKO of Manuel Perez  in December.

Gilberto Sanchez Leon was stopped in the eighth round in December 2015 by Ortiz, who lost an April 2016 return bout to Berto by fourth-round knockout despite flooring the winner in the second.

In succession, Ortiz has scored a fourth-round knockout of Saul Corral in July 2017, battled to a draw with left-handed two-division champion Devon Alexander in February 2018, and lost a narrow unanimous decision to two-division title winner Robert Guerrero in his last fight in August.

“I thought I won. It is what it is. It was a close fight. He didn’t hurt me. A couple times I got caught off balance but that was it. I should have boxed a little better, but hey, he did what he had to do,” said Ortiz, who lost to Guerrero, 96-94, on all three judges’ cards.

“I know I box a lot more usually. But tonight, it was more toe-to-toe. I don’t know if it was machismo or what. It was a good fight though. He’s a great fighter. We’re still fighting. We have a decade left. I’m going to stay at welterweight and I’ll take any 147-pounder.”