The 2008 Olympic bronze medalist from Cuba—has enjoyed a career resurgence, climbing up the ranks to become a top welterweight contender. Read Bio 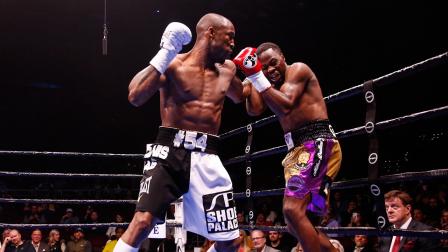 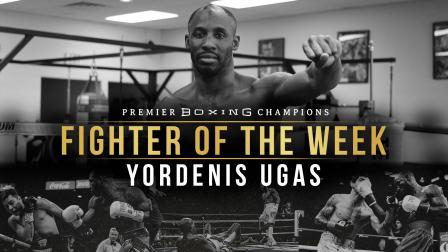 Fighter Of The Week: Yordenis Ugas click here to get video transcript 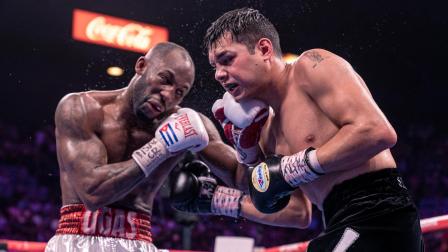 The Cuban welterweight contender moves closer to another world title shot as he flaunts an array of skills on FS1 PBC Fight Night.

Ugas vs. Dallas: Fighting For That Next Step Forward

Cuba’s Ugas has proven to be elite, and wants another crack at a world title, but must first get past the rejuvenated Dallas Jr. Saturday night on FS1.

Yordenis Ugas Wants to Stand Out in a Stacked Division

The smooth Cuban technician plans to send a message to the rest of the welterweights when he faces Mike Dallas Jr. Saturday night on FS1.

Cuba's Yordenis Ugas fought his way out of his native country and is now making a splash in the U.S. as one of the world's best -- and most feared -- welterweights.

A Cuban bronze medal winner in the 2008 Olympic Games, Yordenis Ugas began boxing at age six 6 as a way of coping with the poverty he endured as a youth.

“I have great memories of all of them. With ‘Bud’ Crawford, I beat him 27-10 in the 2007 Pan American Games. It was an awesome fight, but I always knew Crawford had greatness in him and a bright future in the sport. I fought and beat Darlys Perez four times, including in the Pan American Games,” said Ugas.

“I’ve beaten Francisco Vargas twice, in 2005 and in 2006. I beat Khabib [Allakverdiev] in the semifinals of the World Amateur Championships, 45-21, in 2005, and both Jose Pedraza and Sadam Ali in 2008. I know I won against Julius Indongo, also, but I don’t remember the score.”

Nicknamed “54 Milagros" (Miracles), Ugas defected from Cuba in 2010, taking a circuitous route from Mexico to Miami, leaving behind his parents and several cousins, and turning pro as a Miami-based welterweight in 2010, going 5-0 with three knockouts over five months.

Ugas was 11-0 with five knockouts and weighed 142 pounds entering his first loss by eight-round split-decision to then-unbeaten Johnny Garcia in March 2012.

A 140-pound Ugas was 15-1 with seven stoppage victories in 2014 before losing consecutive split- and unanimous decisions to then-unbeaten fighters Emanuel Robles (February) and Amir Imam (May).

“At that time, I was reflecting and organizing my life. I was thinking of the next step. The idea was always to return to the sport and to compete. Salas has a unique history of mentally and physically preparing Cuban boxers,” said Ugas, who moved to Las Vegas and returned as a welterweight under Salas.

“He gradually restored my willpower to regain my gym regimen and rhythm, suggesting the move to 147 was perfect, re-energizing me after having trouble making 140. The change of division was good. I changed the type of work I was doing. I changed trainers and made changes in my life is what made a difference.”

REBOUNDING WITH A VENGEANCE

Jamal James and southpaw Bryant Perrella were a combined 34-0 with 22 KOs in 2016 before falling to Ugas by unanimous decision and fourth-round stoppage in August and September respectively.

The 6-foot-2 James entered at 20-0 as a late replacement for the 6-foot-1 Perrella, who had stopped 11 straight opponents but bowed out just days earlier with an injured left thumb.

Ugas scored first- and final-round knockdowns against Perrella, a fight dedicated posthumously to Miami Marlins’ pitcher Jose Fernandez, a 24-year-old compatriot who was killed in a boating accident on September 25, 2016.

“My ability to win on short notice scares fighters,” said Ugas, who accepted the Lara fight on Monday, April 24 at 2 p.m., replacing Mario Barrios against an overweight Lara at 154 pounds after a layover in Texas and arriving in Mississippi for their bout at 2:20 a.m. “I work hard in the gym and wake up ready to fight.”

Ugas took the Dulorme fight days before their clash on the Floyd Mayweather-Conor McGregor undercard.

“I can beat fighters who have a variety of styles under different circumstances. Against Dulorme, I got dropped as a pro for the first time in the seventh round but scored two second-round knockdowns and I won the fight. I replaced Shawn Porter against Dulorme on eight day’s notice. It was a great comeback on a big night,” said Ugas.

“I fought Jamal James on a few day’s notice. James was a right-hander replacing Bryant Perrella, who was a southpaw. In both situations, I demonstrated that I have the mentality to overcome adversity. In those two fights, I provided evidence that I have power and confidence against southpaws, and I truly feel as if I am peaking and that I will be fighting at the height of my career.

“Robinson had a 13-fight winning streak, including eight knockouts, and he had never been stopped. I’m ready for anyone in the division,” said Ugas, who halted Batista on the undercard of a first-round stoppage by IBF champion Errol Spence over Carlos Ocampo.

“I wanted that opportunity, really badly, to show Errol Spence that I was a worthy opponent to fight him. Jonathan Batista was someone who beat me as an amateur, so to be able to score four knockdowns in two rounds was a demonstration of my power.”

Ugas was in his first-ever title shot against Porter, a two-time champion making his initial defense at the MGM Grand in Las Vegas. Ugas out-landed Porter, 57-34, in body blows while each landed 79 power shots, convincing one judge that he had won (117-111) with the others picking Porter, 116-112 and 115-113.

“Porter’s an aggressive fighter, but I’m a warrior as well. There’s no doubt about it, I was robbed tonight. After the first round I figured him out and dominated the fight,” said Ugas, who trailed, 144-128 in total punches and 65-49 in jabs.

“He had no answer when I was pushing him back. I dominated the fight in my opinion. I showed tonight that I belong with the elite fighters at welterweight. All I can say is that I’m ready to fight any of the top names in the division. I’ll be back.”

Ugas then plowed through Figueroa, scoring a first-round knockdown, repeatedly driving the younger man backward, bludgeoning him to the head and body along the ropes and losing only a fifth-round point-deduction for holding.

Ugas landed nearly all power punches against Figueroa in support of the Manny Pacquiao-Keith Thurman main event and a fight he said called “a big opportunity to derail an undefeated fighter,” to “get me right back into a world title fight,” and “to prove to the world that I’m one of the best welterweights in the division.”

In his last fight, Ugas dominated nearly every round of a seventh-round stoppage of journeyman Mike Dallas Jr. on February 1 at Beau Rivage Resort & Casino in Biloxi, Mississippi.

“I want to be as active as possible getting ready for a big fight but also, getting the exposure. I’m a fighter who has had to prove himself on national television in difficult fights and situations. I’m a two-time amateur world champion and Olympic bronze medalist,” said Ugas.

“I’m a seasoned veteran who is more mature and focused than ever. I’m a fierce finisher and counter-attacker with solid defense and endless energy.  When I come, I come to fight. I like the adrenalin and I love putting on a show.”