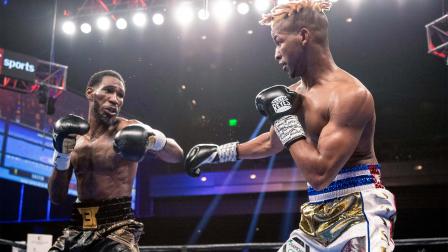 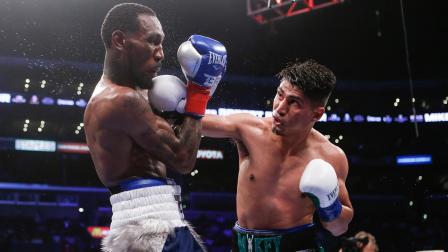 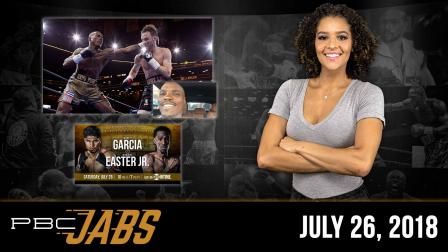 Robert Easter Jr. is Champing at the Bit

The former world lightweight champion is eager to return to the ring and take on the best in a stacked 140-pound division.

The super welterweight contender looks better than ever as he moves closer to another world title shot with an emphatic performance Saturday night on SHOWTIME.

Robert Easter Jr. DRAWS with Rances Barthelemy by DR in Round 12 of 12

Mikey Garcia WINS against Robert Easter Jr. by UD in Round 12 of 12

Robert Easter Jr. WINS against Denis Shafikov by UD in Round 12 of 12

Robert Easter Jr. WINS against Luis Cruz by UD in Round 12 of 12

Robert Easter Jr. WINS against Richard Commey by SD in Round 12 of 12

Growing up in “The Mud”—the vernacular for the mean streets of South Toledo among its inner-city youth—Easter became known in the neighborhood as “E-Bunny.”

Being the son of a former professional fighter, boxing in general—and Robert Sr.’s influence as his trainer, in particular—kept Robert Jr. from getting caught up by the crime, violence, gangs and drugs which cost many friends their freedom, if not their lives.

On either side of his neck, Easter, Jr., has a tattoo of the names of both his mother, Robin Ellis, and Robert Sr. In addition, Easter Jr., whose grandfather, James Easter, was a boxer, wears the likeness on his left forearm of a friend who died in a gunfight outside a South Toledo bar.

“As a child, living in the ghetto, I watched my mom, Robin Ellis,” said Robert Jr., “She struggled with seven kids. I was third born and one of five boys and two girls.”

Even as a little boy, Easter watched footage of Robert Sr.’s fights, often wearing his father’s over-sized boxing trunks and mimicking his moves with bathroom tissue on his fists and Vaseline on his face.

“I would go to the gym with my father and run around. That’s when I was like 4 or 5 years old,” said Robert Jr., whose father retired in 1999 with a record of 9-3-2 (6 KOs) after campaigning at weights between 159-and-171 pounds. “I would come home, go to the bathroom, wrap toilet paper around my hands and put Vaseline on my face and shadowbox for hours. It was natural for me. It was like I was born into boxing.”

ON THE COME UP

After graduating from Bowsher High School in 2010, Easter qualified as an alternate on the 2012 U.S. Olympic boxing team. Easter’s amateur success led to a near run-in with future stable-mate and eventual four-division title-winner, Adrien Broner at a junior Olympics tournament in Broner’s hometown of Cincinnati.

“I was 10, and luckily Adrien was 11 so we were fighting in two different divisions,” said Easter. “I fought first and I stopped my guy, who was actually from Cincinnati. Then I saw this broad-shouldered kid with these nasty braids in his hair. He looked like an adult beating up on kids.”

At that point, Broner and Easter formed a bond, one that remains strong today. After spending a semester and a half in a local college, Easter dropped out, and, shortly thereafter, received an invitation from Broner and his corner man, Mike Stafford, to come and train with them in Cincinnati.

Later that year, Easter made his pro debut with a second-round TKO of Eddie Corona on November 10, 2012 at The Staples Center in Los Angeles. The triumph was the first of Easter’s eight straight knockouts in three or less rounds to begin his career, ending with a first-round KO of Hardy Paredes in December 2013.

Easter was 17-0 with 14 knockouts after his scoring of what, at the time, had been his biggest career win on April 1, 2016, a fifth-round TKO of former champion Argenis Mendez that represented the then-25-year-old’s fifth straight stoppage victory.

It was June 6, 2016, Robert Easter Sr.’s 48th birthday, when he learned that Robert Jr. was getting his first shot at a 135-pound title. Robert Sr. received another “blessing from God” the day he turned 49: the birth of grandson Robert Easter III.

“A year later, Robert's a world champion and his first child's born on my birthday," said Robert Sr. "He looks like Robert when he was a baby and had his hands balled up.”

By then, the nearly 6-foot Robert Jr. already had achieved championship glory, having risen from an eighth-round knockdown to win a fight for the IBF’s vacant 135-pound title by razor-thin split-decision over previously unbeaten Richard Commey, who entered their September, 2016 bout at 24-0 with 22 KOs.

Easter-Commey produced the PBC’s Round Of The Year in the closely contested ninth, with two of the judges giving it to Easter and one giving Commey the nod, factoring into Easter’s ultimately winning the fight.

Easter enjoyed homecomings for his next two victories, earning his first and second defenses by unanimous decisions over Luis Cruz and Denis Shafikov at The Huntington Center in his native Toledo in February and June 2017.

On the same day that his son “3-Bunny” was born, Easter was sparring 12 rounds in advance of his clash with Shafikov, who was coming off a split-decision over Commey in December 2016.

“Little man’s been keeping me up, but it’s all good," said Robert Jr. at the time. "Right after we had him, I still went to the boxing gym to work on my craft to train for this fight.”

A QUEST FOR GREATNESS

On January 20, seven days prior to his 27th birthday, Easter won his third defense by split-decision over two-division champion Javier Fortuna, a previously once-beaten southpaw who, in victory, would have become the first Dominican-born fighter to win a third crown in as many divisions.

On July 28, 2018, Easter attempted to unify versus WBC counterpart and four-division champion Mikey Garcia at The Staples Center in Los Angeles. However, he suffered his first career loss as Garcia used his veteran savvy and skills to drop Easter once in the third and win a 12-round unanimous decision.

"Whenever we step in the ring, we are both putting our lives on the line and tonight Mikey was victorious," said Easter. "I just couldn't find the timing and I just couldn't let my right hand go. He caught me with a clean shot and I went down, but I got up like a true champion."

On April 27, 2019, Easter and former world champion Rances Barthelemy fought to a 12-round split draw at Cosmopolitan in Las Vegas. Easter would move up to super lightweight in his next bout, taking on dangerous slugger Adrian Granados on October 26, 2019, at Santander Arena in Reading, Pennsylvania--the same place Easter won his first world title versus Richard Commey.

“I felt strong at 140-pounds. I held my own," said Easter. "It was something new for me and I felt comfortable. Granados came and brought it and I knew he would make me fight.

“This was a hell of a test for me at 140 and I felt strong.  I’m not calling out no body specifically, but you know there are champions in this weight class and I’m coming for all the bouts. Line ‘em up.”