Boxing since age 11 in the Dominican Republic, Javier Fortuna has been to the top of the 130-pound division and is fighting to return there. Read Bio 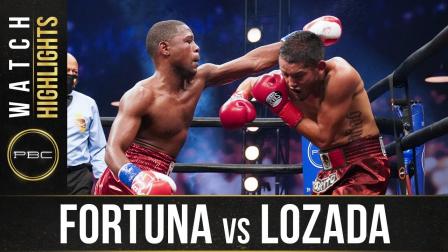 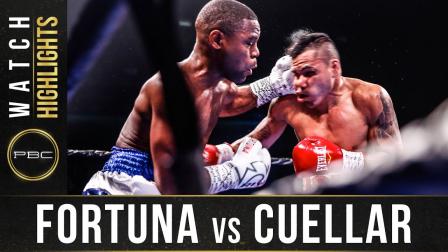 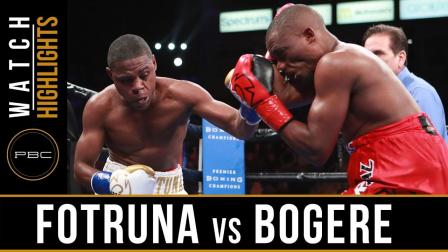 The former world champion is primed for another strap, this time at lightweight, as he delivers a sensational performance in the main event on FS1 PBC Fight Night.

The undefeated super welterweight is ready for another world title shot following a one-sided victory over Wale Omotoso Saturday night on FS1.

No Contest vs Francisco Lorenzo 34-8-0

Javier Fortuna Francisco Lorenzo by NC in Round 1 of 9

By continually bringing the sting with knockout power, Javier Fortuna has earned the right to brand himself “El Abejon” (The Bumblebee). Equal parts force and finesse, the smooth, hard-hitting fighter continues to generate a buzz worthy of his nickname.

Born and raised in the Dominican Republic, Fortuna began boxing before he hit his teens, following in the footsteps of older brother Jonathon Alexander Fortuna.

According to Fortuna, his mouth continually got him into trouble when he was a boy, resulting in plenty of scraps.

Fortuna made his professional debut with a first-round knockout of Ricardo Johnson in Santo Domingo in March 2009.

Winning eight of his first 10 fights by way of KO, he quickly began to establish himself as a slick yet powerful boxer skilled at fighting aggressively yet judiciously.

“I have several different approaches to boxing depending on the opponent I am going to fight,” Fortuna told Maxboxing.com. “I am not saying I am in a top position already in terms of opponents, but I like to fight like Floyd Mayweather and [Sergio] ‘Maravilla’ Martinez fight. Since I was a little kid, I’ve been fighting like that.”

In July 2012, Fortuna tore through former 126-pound champ Cristobal Cruz, gaining a second-round TKO for his biggest win up to that point.

Next, on the undercard of Manny Pacquiao and Juan Manuel Marquez’s fourth mega-fight in December 2012, he handed Irish prospect Patrick Hyland his first loss, winning a 126-pound interim title in the process.

After fighting Cuban Olympian Luis Franco to a draw in August 2013, Fortuna would soon move up in weight to 130 pounds.

He dismantled all four of his opponents in 2014, punctuated by a fifth-round KO of Abner Cotto in November and a first-round stoppage of Miguel Taveras in December.

As Fortuna told Thaboxingvoice.com in 2012: “I want to be No. 1 pound for pound. That’s what I want. Until I reach that goal, I will not retire from boxing.”

Putting the world on notice

Fortuna staked his claim as one of the world's top boxers at 130 pounds when he took on Bryan Vasquez in a Premier Boxing Champions bout in Brooklyn, New York, on May 29, 2015, that aired on Spike TV.

The skilled Dominican dictated the action in the ring for nearly all 12 rounds, using his superior speed to hold Vasquez at bay. Vasquez battled his way back into the fight in the middle rounds, but Fortuna took control over the final three rounds to win a unanimous decision and remain unbeaten.

That win netted Fortuna the WBA World Super Featherweight title, a belt he defended in September 2015 with a 10th round TKO over Carlos Ivan Velasquez. However, he'd suffer a setback on June 24, 2016 as he lost his belt to Jason Sosa via 11th round TKO in Beijing, China.

Fortuna returned to the ring on September 23, 2016, stopping Marlyn Cabrera in two rounds in the Dominican Republic. On November 12, 2016, he took on undefeated American Omar Douglas at Liacouras Center in Philadelphia. Fortuna flashed his elite skills yet again, outpointing Douglas over 10 rounds in a close affair.

Fortuna's next two bouts took place in his native Dominican Republic. On June 24, 2017, he knocked out Mario Beltre in two rounds at Hotel Jaragua. Then on September 14, 2017, he made it four in a row with a 10-round unanimous decision over Nicolas Polanco, also at Hotel Jaragua.

Fortuna's win streak came to an end on January 20, 2018 as he suffered a debatable 12-round split decision loss to former world champion Robert Easter Jr. at Barclays Center in Brooklyn. Then on June 16, 2018, Fortuna and veteran slugger Adrian Granados fought to a four-round no decision, caused by Fortuna accidentally falling out of the ring and injuring himself in the process.

On February 9, 2019,  Fortuna and long-time contender Sharif Bogere squared off in a competitive affait at Dignity Health Sports Park in Carson, California. Fortuna scored a knockdown in the sixth on his way to winning a 10-round unanimous decision.

The slick Dominican southpaw followed that up with an impressive second-round TKO over Jesus Cuellar on November 2, 2019, at MGM National Harbor in Oxon Hill, Maryland.

On November 21, 2020, Fortuna proved he's still a dangerous proposition for any 135-pounder, blasting out Antonio Lozada in six rounds. It was a dominant performance from the opening bell as Fortuna used his skills and power to completely flummox Lozada.