Javier Fortuna scored an early knockdown, then dominated down the stretch to gain a 10th-round TKO of Carlos Velasquez and retain his world title.

Fortuna caught Velasquez with a quick combo to the head in the second that sent the tough Puerto Rican to the canvas.

He followed it up with a ruthless barrage in the third that opened the spigot on Velasquez’s nose.

It was apparent that Velasquez was going to have a tough time catching Fortuna with a big shot of his own, as the shorter Dominican was quick to spin out of any real trouble.

Fortuna pecked away at Velasquez through the middle of the fight, finally unleashing another whirlwind of punches at the end of the eighth right before the bell.

He did it again at the end of the ninth before finally pummeling Velasquez from one corner to another in the 10th. Referee Russell Mora stepped in between the fighters to stop the bout, pushing back Fortuna, who somersaulted on the canvas in celebration. 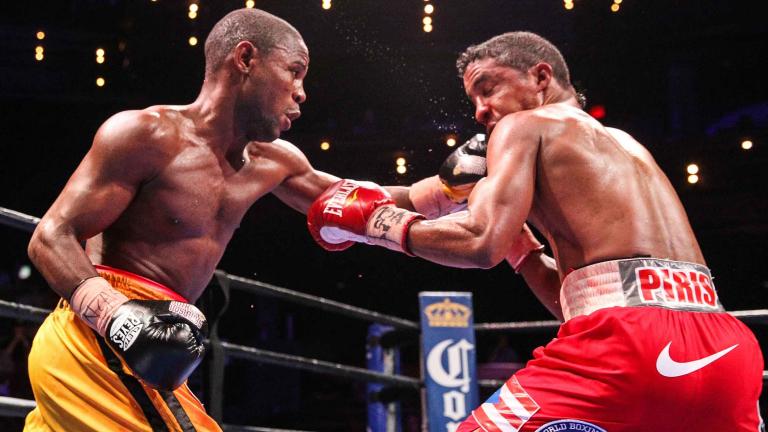 Javier Fortuna got to Carlos Velasquez early, and he without a doubt got to him late, as the 130-pound world champion from the Dominican Republic thoroughly outclassed his opponent in his first title defense in front of a rowdy Las Vegas crowd at the Palms Casino Resort on Tuesday night.

Sibling revelry: With his twin brother by his side, Carlos Velasquez is ready for his first title shot

You could forgive Carlos Velasquez’s opponents for seeing double even before their bells get rung like mom calling the kids home for dinner.

After Javier Fortuna knocked off Bryan Vasquez in May, he earned himself a vacant 130-pound championship in the process. Now that he’s set to take on Carlos Velasquez on Tuesday night at the Palms Casino Resort in Las Vegas, he’ll get his first taste of title defense in the division.