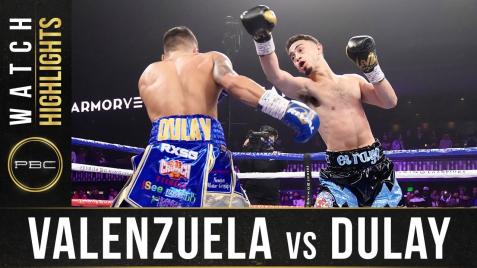 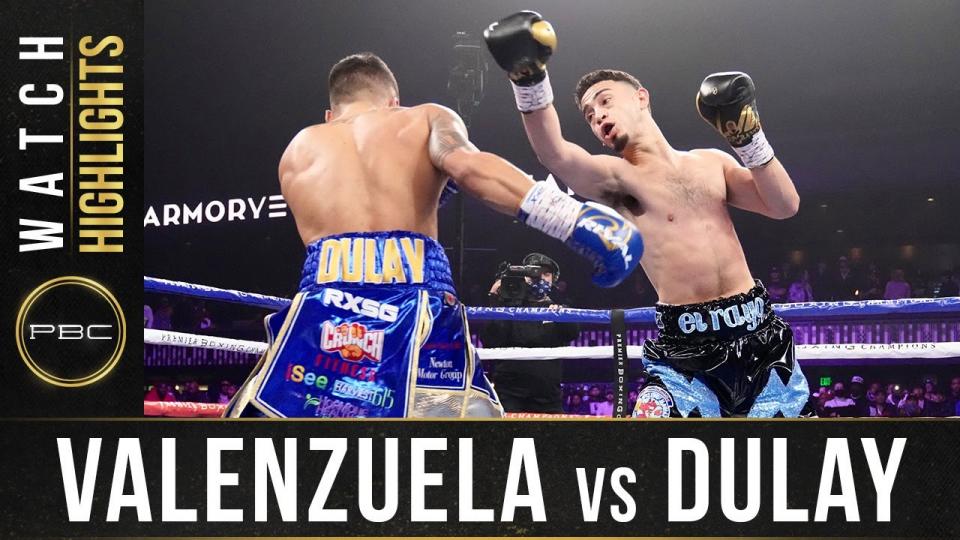 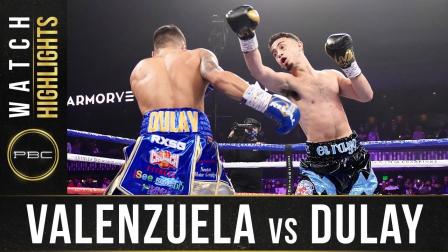 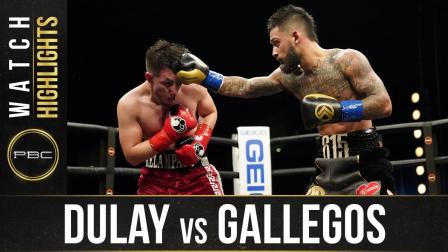 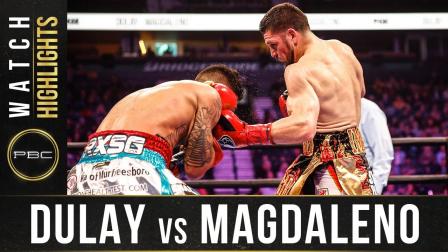 The former world champion is primed for another strap, this time at lightweight, as he delivers a sensational performance in the main event on FS1 PBC Fight Night.

Austin Dulay Justin Pauldo by NC in Round 3 of 6

Nashville, Tennessee's Austin Dulay is making the music city proud. Nicknamed "The Dream," Dulay was an amateur standout who, as a professional, is climbing the 135-pound ranks as he closes in on a world title shot.

Austin Dulay was a rageful child growing up in Hendersonville, Tennessee, where he was born and raised some 20 miles northeast of downtown Nashville. So his father, Fred, chose boxing as a means of focusing Dulay’s frustrations.

“As a kid, I had a really bad anger issue and a lot of aggression, so my father said I needed to channel it into something before I ended up in trouble,” said Dulay, the product of a Filipino father and an Italian mother.

“I started boxing when I was eight. I went into a boxing gym in Hermitage, Tennessee. Originally I wanted to try MMA, but my dad said, ‘If you want to think about MMA, you need to get your hands right beforehand.’ So we went straight into boxing.”

Dulay eventually “fell in love with the sport,” but not before having his patience tested.

“I kind of got bored with the old school training, things like working on nothing but your jab for a week,” said Dulay. “I didn’t begin fighting as an amateur until I was 11, so, looking back, I recognized concentrating on the fundamentals as a foundation for my future success.”

Dulay went 126-11 as an amateur, twice winning Regional Golden Gloves championships, once earning Regional Boxer of the Year and capturing a silver medal at the Junior Olympics as a runner-up to Erickson Lubin.

"I was given the Best Boxer Award both years at regionals," said Dulay. "The Mid-South team gave me the nickname, 'The Dream,' after winning the Golden Gloves regionals two years in a row.”

"We were at Robert Garcia’s Gym and I wasn’t even a pro, yet. They asked if I wanted to spar a world champion, and I didn’t know at the time that Cuellar was training for [his eighth-round knockout of southpaw Vic Darchinyan in June 2015.] I got in there and we probably went 12 rounds. I tried to touch gloves at the beginning and he hit me with an overhand left, so we went into war mode for a while. Things calmed down a little bit and I started to box. He’s tough, strong and it was good work," said Dulay.

"[Mikey Garcia and I] sparred lots of rounds before I was a pro, and then, also two or three fights after turning pro. That’s some of the best work I’ve ever had. Mikey brings something different to the table, like, this slow pressure. Mikey’s so precise with his movements it feels like he’s always on your chest, even when he’s not. Those skills are definitely something I want to include in my arsenal."

Dulay made his pro debut with a first-round knockout of Raymond Johnson in October 2015, representing his first of three consecutive first-round stoppages through January 2016.

“The Dream” went 4-0 with two knockouts over the remainder of 2016, rising to 7-0 (5 KOs) following a six-round unanimous decision over John Willoughby in September of that year.

There were third-, fourth- and fifth-round knockouts among Dulay's four victories in 2017, which included his three-knockdown, six-round unanimous decision over Jose Arturo Esquivel in May of that year.

Esquivel was followed by a third-round stoppage of Carlos Padilla in August as Dulay's eighth knockout victory improved his mark to 11-0.

"I dropped Padilla three times, but he was tough and game in an intense fight. They said Padilla hit hard, and that it was going to be my biggest fight. My favorite fighter is Manny Pacquiao both because he’s Filipino and, like me, he’s a southpaw," said Dulay.

"Pacquiao is not only a warrior, but he’s also got a great personality. A true warrior like Pacquiao can be a humble, likeable guy who cares about the world and his people. Pacquiao doesn’t run his mouth as much and lets his hands do the talking. I feel like I’m the same way."

Dulay was stopped in the sixth round of his next bout in April 2018 by unbeaten Chris Colbert, representing his first of two losses in his next five fights with two stoppage victories. Dulay won his last bout in November by unanimous decision over Jose Luis Gallegos to rebound from a 10-round unanimous decision loss to two-time title challenger Diego Magdaleno in February.

“I [was] making him miss, catching shots, countering. He hit me with a few good body shots. That doesn’t replace the heavy shots I hit him with for 10 rounds straight," said Dulay immediately after the fight, having since turned the setback into a lesson learned and hired renowned conditioning guru Larry Wade.

“Larry Wade said we were over-training a lot and that we were not at our peak but past our peak for the fight. I didn’t prepare for the Magdaleno fight in the right way, failing to develop a backup game plan among other things. I learned a lot from the Magdaleno fight. That's something that has made me a lot better, which is what you saw in my last fight and it’s what you’ll see for those yet to come."

On November 21, 2020, Dulay made an impressive ring return, dominating Jose Gallegos to win a 10-round unanimous decision at Staples Center in Los Angeles. Making excellent use of strong straight left hands and uppercuts, Dulay was able to stifle the pressuring style of Gallegos and outwork him in the exchanges. Gallegos was never able to solve Dulay's quick pot shots from the outside.

As is customary when an orthodox fighter faces a southpaw the fight featured several unintentional headbutts exchanged during the rugged 10 rounds. The one-sided scores were 100-90, 100-90 and 99-91 for Dulay.

Dulay wasn't so fortunate in his next bout. On December 18, 2021, he suffered a fourth round TKO loss to rising unbeaten prospect Jose Valenzuela in spirited action at The Armory in Minneapolis.