Super welterweight contender Jose Benavidez Jr. is ready to make his mark in a third division and continue the fighting family tradition of the Benavidez tradition. Read Bio 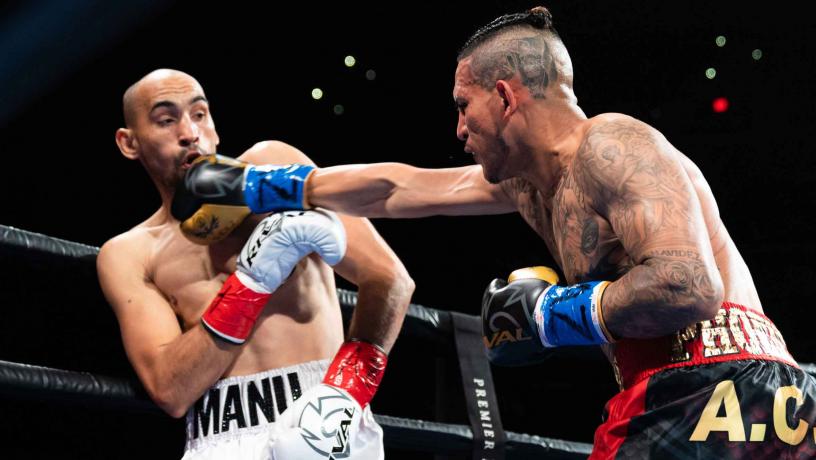 The two-time world champion remains undefeated with a breathtaking display in front of hometown fans in Phoenix, stopping Davis in seven rounds Saturday night on PBC on SHOWTIME.

Jose Benavidez Jr. is Grateful for His Second Time Around

The ultra-talented boxer-puncher makes his anticipated return to the ring against Francisco Emanuel Torres Saturday night at Footprint Center in Phoenix, live on PBC on SHOWTIME.

Former interim super lightweight world champion Jose Benavidez Jr. is ready to make his mark in a third division and continue the fighting Benavidez family tradition as he campaigns in the talent-laden 154-pound division, on the hunt for another world title shot.

Jose Benavidez Jr. started doing morning road work when he was about two or three-years-old, according to Jose Sr. The father made mini pads for his son to punch. Before he was in kindergarten, Jose Jr. was sparring.

“I got my inspiration from my Dad [and] my family,” Jose Jr. told Sports Illustrated. “Since I was six years old, I’ve been dreaming of being a world champion.”

Jose Jr.’s sparring sessions against champions Manny Pacquiao, Shane Mosley, Amir Khan and Timothy Bradley were a catalyst to an amateur career during where he went 120-5, earned 11 national titles, a pair of Silver Glove championships, and qualified for both the Junior Olympics and the U.S National Team.

A 17-year-old Benavidez debuted professionally in January 2010. His 81-second TKO of Steve Cox representing the first of nine knockouts wins over an 11-month span.

Nicknamed “Merciless,” Benavidez turned 18 on May 15, between first-round stoppages of Arnoldo Pachecho on May 8 and Ronnie Pearson on May 29.

Benavidez’s fast start was in line with his penchant for fast vehicles.

“I had the Maserati, and when I was 17, I had two more,” Benavidez told The Arizona Daily Star. “It’s a hobby. I’ve had Corvettes, Vipers, Escalades. But better to spend money on cars than get into drugs or bad stuff.”

Benavidez went 5-0 (3 KOs) in 2011, the three stoppages being separated by six-round unanimous decisions over Fernando Rodriguez in May and Samuel Santana in June.

Benavidez had been fighting with an injured right hand first broken against Santana, after which he required surgery to remove an extra bone and repair a tendon.

“We decided to go through with surgery and rest,” said Benavidez. “Not fighting because of a broken hand was frustrating, but it turned into motivation.”

Benavidez returned to defeat Sosa and Loya, re-aggravated his hand against Miranda, and took another break before his second-round TKO of Abraham Alvarez in November 2013 at a then-career-high 146 pounds.

Benavidez won four bouts in 2014 comprising consecutive six-round unanimous decisions over Prince Doku in March and Angel Hernandez in May, a two-knockdown, first-round TKO of Henry Auraad in July, and a unanimous decision that dethroned WBA 140-pound champ Mauricio Herrera in December.

“Herrera was very aggressive but I was catching him as he walked into my punches,” said Benavidez, who rose to 22-0 (15 KOs). "I landed all of my combinations, my uppercuts and my body shots. I know I won this fight.”

On May 15th, 2015, his 23rd birthday, Benavidez retained his crown with a 12th-round stoppage of Jorge Paez Jr. before his hometown fans at Phoenix, Arizona’s US Airway Centre.

“There was no way I was going to lose my title in my hometown,” said Benavidez, who floored Paez with a right uppercut in the third round. “But Paez was really tough. I didn’t think he’d get up after that knockdown. Man, he can take a punch.”

Benavidez weighed a career-high 152 ¼ for his next fight in December 2015, a 10-round unanimous decision over Brazil’s Sidney Siqueira. At 24-0 (16 KOs), Benavidez officially left the 140-pound division.

Battles In and Outside The Ring

Benavidez returned to action in July 2016, winning a slugfest by unanimous decision over 148-pound Francisco Santana. But on August 23, while he was walking his dog near his home in Phoenix, a man shot Benavidez in the main artery of his right leg just above the knee.

“The guy came out of nowhere. [The doctor] said, ‘Forget about boxing. It’s not in the picture,’”said Benavidez of what appeared to be a life-threatening injury due to the volume of blood loss. “He said,  ‘You’re not going to box anymore,’ but I knew I would fight again, whatever it took to do that.”

Benavidez returned for consecutive knockout victories in 2018, ending a 19-month absence in February with an eighth-round TKO of Matthew Strode, followed by an impressive 84-second knockout in June of Frank Rojas.

Rojas entered at 22-0 (21 KOs) but failed to rise from a left to a liver set up by a straight right from Benavidez, who improved to 27-0 with his 18th knockout victory.

“I felt better tonight. Last time out, I hadn’t fought in nearly 18 months, so there was some ring rust,” said Benavidez. “He was 22-0 with 21 knockouts. I didn’t go in there trying to knock him out right away, but I caught him with some clean shots and he couldn’t get back up.”

But Benavidez lost for the first time in October 2018, being stopped with 18 seconds left in the 12th round by switch-hitting, three-division WBO 147-pound champion Terence Crawford.

Benavidez wore a black sleeve over the scar where he was shot on his right knee, which the loser said began to hamper him after the seventh round.

“When he fought Terence Crawford, his leg was 60-to-70 percent. I was nervous in the Crawford fight because I didn’t know how the leg would react,” said Jose Sr. “He showed he has heart and did better than I thought. I don’t think he’ll ever be 100 percent recovered, but if we can get 80 percent, I’ll be happy with that.”

Jose Jr. was positive in defeat.

Benavidez wouldn't fight again for three years, concentrating on his family and life outside the ring.

On November 13, 2021, he returned to the ring to face Emanuel Torres. The bout occurred at Footprint Center in Benavidez's hometown of Phoenix, Arizona, with younger brother David on the card in a PBC on SHOWTIME Championship Boxing event. Benavidez and Torres battled to a majority draw. The judges scored the contest 96-94 for Benavídez and 95-95 twice.

“I don’t know how I got a draw,” a disappointed Benavídez said over loud boos from a hometown crowd that so badly wanted to see Benavidez earn the win. “We can run it back. I beat him. I thought I beat him. He kept running. He didn’t want to stay in the pocket. I can’t do anything about the judges’ decisions. I felt good. He just kept holding. I beat him every round. What can I do?”