One of the greatest 140-pounders of all time, former two-division champion Danny Garcia is on a mission to become a three-division world champion. Read Bio 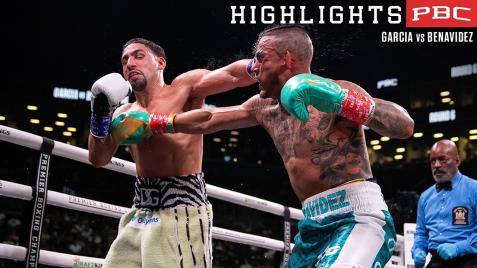 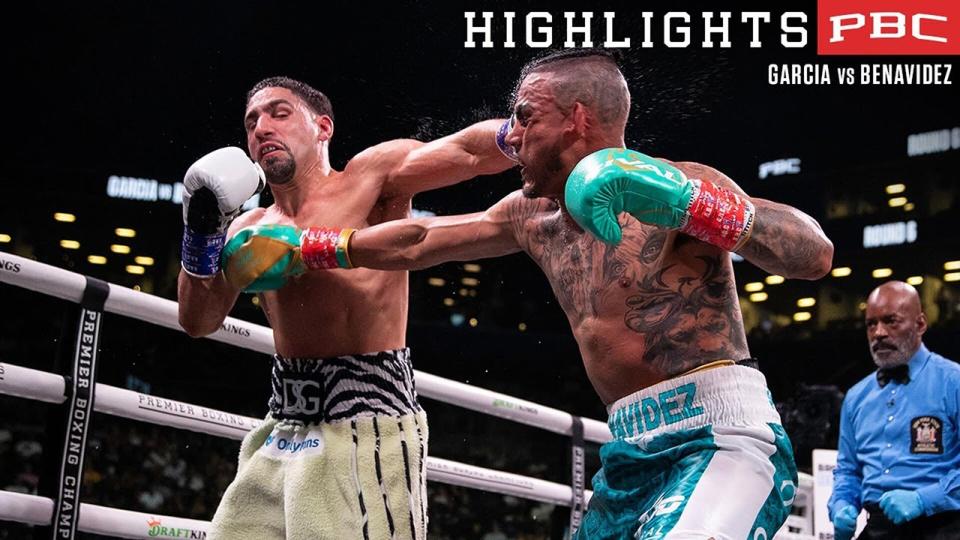 Danny Garcia WINS against Jose Benavidez Jr. by MD in Round 12 of 12 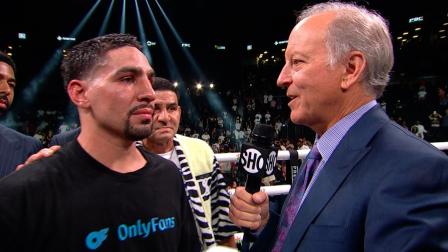 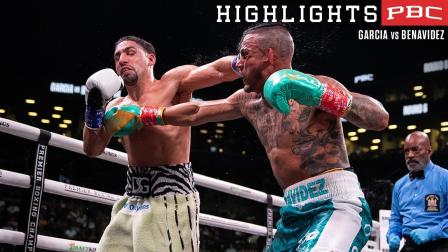 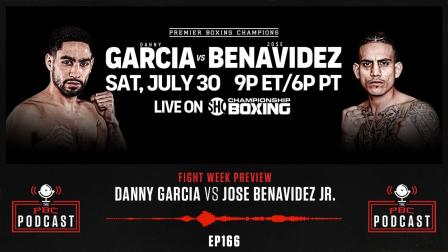 A look back at the history of Puerto Rican boxing in the Big Apple as the great Danny Garcia faces Jose Benavidez Jr. Saturday night in a PBC event on SHOWTIME live from (where else?) the Barclays Center.

A look back at the two-division champ's biggest and best moments at the famed Brooklyn venue as he prepares to face Jose Benavidez Jr. in that same arena Saturday, July 30 on PBC on SHOWTIME.

Danny Garcia WINS against Jose Benavidez Jr. by MD in Round 12 of 12

Errol Spence Jr. WINS against Danny Garcia by UD in Round 12 of 12

One of the greatest 140-pounders of all time, former two-division champion Danny Garcia remains one of the world's finest fighters. Trained by his father, former boxer Angel Garcia, since he was 10 years old, the Philadelphia-born Garcia now seeks to fulfill his dream of becoming a three-division world champion.

For his second professional bout, then-teenager Garcia was buried on the undercard of the Floyd Mayweather-Ricky Hatton fight in Las Vegas in 2007.

Nearly six years later, Garcia was on another Mayweather undercard in Las Vegas, but under much different circumstances.

Garcia entered his fight against Lucas Matthysse as the 140-pound world champion, and won by unanimous decision to cap a dazzling stretch of seven straight victories over current or former world champions.

It was the type of success he and his father/trainer, former boxer Angel Garcia, had aspired to since they first walked into a Philadelphia boxing gym when Danny was 10 years old.

Born and raised in Philadelphia, Garcia has long wanted to become the “next great Puerto Rican fighter” and appears well on his way to achieving that goal.

After an impressive amateur career in which he went 107-13 and won the 2005 U.S. under-19 national championship and the 2006 U.S. national amateur title, Garcia made a dominant pro debut, knocking Mike Denby down three times in a first-round knockout in November 2007.

Garcia, nicknamed “Swift,” knocked out his first five opponents within the first two rounds, including a second-round TKO of Jesus Villareal on the aforementioned Mayweather-Hatton undercard in December 2007.

Garcia claimed the 140-pound championship by winning a unanimous decision over Morales, who had been stripped of the title for exceeding the weight limit.

Garcia next took on another champion, Amir Khan, who entered the July 2012 fight in Las Vegas as a 4.4-to-1 betting favorite.

After a slow start, Garcia caught Khan with a left hook that sent the Englishman to the canvas in the third round.

Garcia then knocked Khan down twice more in the fourth round to earn a TKO victory.

In an October 2012 rematch with Morales, Garcia connected with a lethal left hook in the fourth round that knocked out the Mexican great and sent him into retirement.

Garcia defended his titles with a pair of 12-round unanimous-decision victories over Zab Judah and Lucas Matthysse in 2013, resulting in the Philadelphia Sports Writers Association naming him the city’s pro athlete of the year.

Despite being the champion, Garcia was the underdog in his title defense against Matthysse, who had gained 32 of his 34 victories by KO.

Garcia closed Matthysse’s left eye in the seventh round, and floored the Argentine for the first time in his career in the 11th after taking a direct shot to the chin that knocked out his mouthpiece.

He won a 12-round majority decision over Mauricio Herrera to defend his championship in Puerto Rico in March.

Garcia then annihilated Rod Salka in Brooklyn, New York, in August in a nontitle bout, knocking him down three times to gain a second-round KO.

Garcia made his Premier Boxing Champions debut against Lamont Peterson in Brooklyn, New York, on April 11, 2015, in a bout televised live on NBC.

Garcia tried to press the action early, but Peterson used his defense and mobility to stay away from the Philadelphia native.

Peterson became more aggressive as the fight progressed, but Garcia did enough in the first half of the bout to win a slim majority decision.

On August 1, 2015, Garcia returned to the Barclays Center to take on former two-division world champion Paul Malignaggi. Garcia was simply too fast, too strong and too “Swift” for “The Magic Man.” He dominated from the outset, slowly breaking Malignaggi down until referee Arthur Mercante Jr. mercifully stopped it in the ninth round.

The win earned Garcia a shot at the vacant WBC Welterweight World title versus four-division titlist Robert Guerrero. The fight took place Staples Center in Los Angeles, California, where many came to support hometown fighter Guerrero. After a slow start, Garcia began unveiling his plethora of skills, working behind the jab and firing up and downstairs in combination.

“The Ghost” was game but outgunned. He was stunned several times in the fight but showed his warrior heart, extending Garcia the full 12 rounds. All three judges scored it in Garcia’s favor, giving him the unanimous decision and a world title in a second division.

After a seventh-round stoppage over Samuel Vargas in his Philadelphia homecoming in November 2016, Garcia and WBA Welterweight World Champion Keith “One Time” Thurman engaged in back and forth trash talk in the ring.

The face-off whet fan’s appetite for the welterweight unification, which took place on March 4, 2017.  A crowd of 16,533 packed Brooklyn’s Barclays Center, setting an arena record for a boxing event.

Thurman jumped out to an early lead, keeping Garcia on his heels and landing bombs. Garcia weathered the storm and worked his way back in the fight as he stalked the WBA titlist. The action see-sawed in the championship rounds but Thurman’s early lead held up. He won a twelve-round split decision and added the WBC belt to the WBA strap.

The fight was a success at the gate and on television. Average viewership on the CBS telecast was 3.74 million and it peaked at 5.1 million, the second highest peak for boxing on broadcast television since 1998 (including non-primetime), behind only August 2016’s Premier Boxing Champions Errol Spence Jr. vs. Leonard Bundu event on NBC.

Following the first loss of his career, Garcia took time off to spend time with his family and his many businesses in Philadelphia. He returned on February 17, 2018, versus former world champion Brandon “Bam Bam” Rios.

The two engaged in a firefight early on, but Garcia’s power was overwhelming. A single right hand in the ninth keeled Rios over, inducing the bout’s stoppage and earning “Swift” PBC Knockout of the Year.

Garcia took on “Showtime” Shawn Porter on September 8, 2018, for the WBC title vacated by an injured Thurman. It was a tight nip and tuck affair but, after 12 rounds, all three judges scored it for Porter, who handed Garcia only the second defeat of his career.

What was expected to be a give-and-take slugfest instead was a complete domination. Garcia controlled the action from the opening bell, flooring the durable Granados twice in round two, again in the fifth and battering him until referee Thomas Taylor rescued Granados at 1:33 of the seventh round.

"The way to make a statement tonight was to stop him," said Garcia afterward. "The game plan was to break him down. I have too many tools. I couldn't let him hang around with me.

"I hope I didn't scare Manny Pacquiao away," said Garcia. "I'd love a rematch with Shawn Porter or Keith Thurman, or a fight with Errol Spence Jr. I'm back!"

Redkach was no match for Garcia, who landed an array of power shots for 12 rounds, bloodying and bruising his game but outgunned opponent. Garcia cruised to a unanimous decision, winning by scores of 118-110, 117-111 and 117-11.

“I thought the referee was gonna stop it because I felt like I was punishing him,” Garcia said. “He’s a tough guy, he hung in there, I wanted to get the KO, but I didn’t get it. I feel like I boxed smart, and I feel like that’s what I needed after this layoff. I really wanted the knockout bad, but I’ll accept this."

However, Garcia would suffer a setback in his next bout. On December 5, 2020, he was on the wrong end of a 12-round unanimous decision to unified world welterweight champion Errol Spence Jr.

"He was the better man tonight. No excuses,” said Garcia. “I fought a hard and tough fight. He had a good jab and that was the key to the fight. He was also a bit busier than me.

"I just have to rebuild and see what we do next. I fought hard and I’m proud. All my losses were hard fights that I fought till the end, so I'm proud of my effort.”

Following the loss to Spence, Garcia would remain out of the ring until July 30, 2022 -- a near two-year layoff. On a mission to become a three-division world champion, he made his 154-pound debut against hard-hitting contender Jose Benavidez Jr. at Brooklyn's Barclays Center in a PBC event on SHOWTIME.

It was Garcia's ninth appearence at the famed venue and perhaps his best as he outboxed, outfoxed and outfought Benavidez to win a 12-round majority decision that many felt should have been unanimous.

Garcia went on the attack early and often, targeting Benavidez’s body on his way to landing a career-high of 153 body shots according to CompuBox. Garcia’s superior hand and foot speed left Benavidez trailing him for much of the night. Overall he ran up a 233 to 117 edge in punches landed and owned a 31% connect rate compared to Benavidez’s 20%. After 12 rounds, Garcia had done enough to earn the decision by scores of 117-11, 116-112 and a surprising 114-114. After the fight, Garcia credited his father and trainer Angel Garcia with staying by his side throughout his battle with anxiety and depression.

“Angel was there with me the whole way,” said Garcia. “I’m nothing without this man. I thank him every day. People ask me all the time, why do I fight? I make a lot of money. Why does Warren Buffett still make money? I’m a fighter. This is what I do, what I love to do.”

Garcia also added two intriguing potential future opponents he would like to face.

“I’d like the rematch with Keith Thurman, he took my ‘0,’” said Garcia. “I’ll also take [WBA Middleweight Champion] Erislandy Lara for the middleweight title at 154 pounds.”