One of the hottest prospects in the game, Vito Mielnicki Jr.'s blend of skill and athleticism made him one of the most popular amateurs in the United States. As a pro, he's doing the same, turning in performances with a flair that is sure to make him a crossover star. Read Bio

Vito Mielnicki Jr. WINS against Omar Rosales by TKO in Round 4 of 10 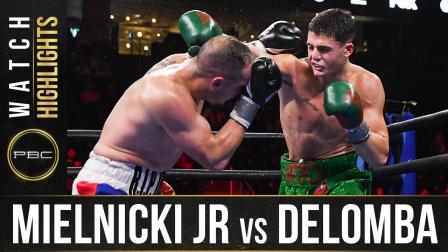 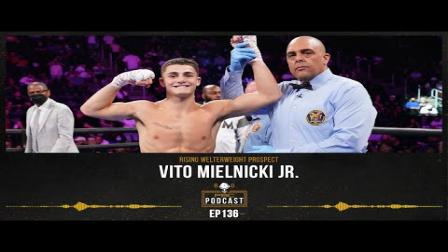 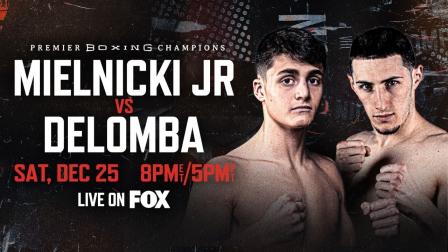 Davis continues to stake his claim as the face of boxing, stopping the game Garcia to successfully defend his WBA World Lightweight Title Saturday night on Pay-Per-View.

Vito Mielnicki Jr. WINS against Nicholas DeLomba by TKO in Round 10 of 10

Vito Mielnicki Jr. WINS against Noah Kidd by TKO in Round 2 of 8

One of the hottest prospects in the game, Vito Mielnicki Jr.'s blend of skill and athleticism made him one of the most popular amateurs in the United States. As a pro, he's doing the same, turning in performances with a flair that is sure to make him a crossover star.

Vito Mielnicki Jr. is an athlete. He is a fighter. Not just any fighter; a fighter who brings rare intangibles. A. He has ability, and B. He has Marketability.

Vito’s story begins in the town of Newark, New Jersey.  Mielnicki Jr. found The Jamar Carter Gym that was in the basement of a church at the age of seven, and never looked back.

Mielnicki trained at some of the toughest and roughest gyms in New Jersey, such Elite Heat and Boylan Rec, both in Newark. He began his amateur career fighting against the best fighters from Philadelphia, Washington, D.C. and Baltimore at the Upton Boxing Gym in Baltimore. He was a frequent travel partner with current world champion Gervonta Davis, Otha Jones III and Olympic silver medal winner and top contender Shakur Stevenson.

Mielnicki performed at a high-level, soaring in the national rankings as he dominated each weight class. His amateur career record now reads an astonishing 147-22 and he was the four-time Junior National Golden Gloves champion (2011, 2012, 2014 and 2015). In 2011, he was named the Most Outstanding Boxer in the tournament.

He won his 1st National Championship and was trained by Walli Moses. In his young career, Mielnicki has been trained by Hall of Famers Virgil Hill and James “Buddy” McGirt.

"He has a very bright future, and he is a great kid. The sky is the limit for Vito," said McGirt.

Mielnicki has competed all over the world in places such as Canada, Serbia, Spain, England, and Puerto Rico. He compiled an international record of 10-2 and won the Quebec Cup in 2015.

Mielnicki’s decision to turn pro was solidified after a great performance in Spain where he ended up on the wrong end of a bad decision.

"I believe my performance in Spain was one of the best I have had, and I could not get a decision. I feel that I have a professional style, and based on some of these decisions, I can see that it is more for the pros then the amateurs," said Mielnicki.

"My body is maturing, and it was only a matter of time anyway.  I had my mind pretty much made up before we went to Spain, but that fight solidified it."

The 5-foot-11 Mielnicki has had the opportunity to measure himself against some emerging professionals.

"I think that has been big for me.  I have worked with the likes of Adam Lopez and Thomas Mattice, and that has definitely helped me."

"I have been wanting to turn professional for a long time.  This has been a goal and dream for me, and I know that I can do big things.  I have to see where my debut will happen.  We are looking to see under which promotional banner and on what card this will happen, but I know when I do fight in New Jersey, I will be very popular and will have a tremendous amount of support."

Managed by Anthony Catanzaro and trained Muhammad Salaam and Dwyke Flemmings, Mielnicki made his professional debut in Newark’s Prudential Center on July 13, 2019, as a welterweight. He scored a knockout in 76 seconds of the first round.

Mielnicki hopped back in the ring on September 20, 2019, knocking out Caleb Bailey in one round at La Hacienda Event Center in Midland, Texas. Then on November 23, Mielnicki fought on the undercard of the Deontay Wilder-Luis Ortiz world title rematch at MGM Grand in Las Vegas, Nevada. Mielnicki shined, stopping Marklin Bailey in two.

Mielnicki kicked off 2020 on January 18, facing Preston Wilson at the Liacouras Center in Philadelphia, Pennsylvania. He was extended the distance for the first time in his career, showing a veteran’s composure as he won a four-round unanimous decision. All three judges had it a shutout, 40-36.

On Saturday, February 22, Mielnicki returned to the ring against Corey Champion in welterweight action. The bout was part of the stacked undercard on the Deontay Wilder-Tyson Fury rematch at MGM Grand in Las Vegas, Nevada, live on pay-per-view. Mielnicki dominated, dropping Champion in the second and winning a wide unanimous decision by scores of 40-34, 40-35 and 40-35.

A right in the second drove Rollins (3-2, 2 KOs) across the ring. Mielnicki (6-0, 4 KOs) followed up with a series of blows, battering him until referee Jerry Cantu stapped in at 2:19 of the second.

Mielnicki would follow that up with a six-round unanimous decision win over Steven Pulluaim on December 5, 2020.

Mielnicki simply continues to improve. On February 27, 2021, he made his FOX PBC Fight Night debut with a spectacular third-round TKO over Noe Lopez.

In the second, the 18-year-old Mielnicki floored López when he rolled under a lazy jab and landed a lightning quick straight right hand that dropped López on the seat of his pants.

The 34-year-old López rose at the count of six by referee Gerald White. Mielnicki of Roseland, N.J. picked up the pace and continued to pound Noe in the third round. He landed a barrage of hard punches at will that frame, forcing White to call a halt to the assault with 10 seconds remaining in the round, handing Mielnicki the stoppage victory.

A MINOR SETBACK, A MAJOR COMEBACK

On April 17, 2021, Mielnicki suffered a shocking eight-round majority decision loss to a game James Martin. Never one to make excuses, Mielnicki immediately signed up for a rematch, which was set to occur on August 31, 2021. However, Martin was significantly overweight for the fight and Mielnicki faced Noah Kidd instead. Mielnicki looked as good as ever, stopping Kidd in two rounds at Prudential Center in Newark, New Jersey.

On December 25, 2021, Mielnicki gave his hometown fans at Prudential Center a holiday gift they'll never forget. Headlining FOX PBC Fight Night, Mielnicki stopped tough veteran Nicholas Delomba in the 10th and final round of their bout. Mielnicki was well ahead on all three cards at the time of the stoppage.

"I just want to keep growing and growing next year,” said Mielnicki Jr. “I might get on some undercards next year, or I'd be thrilled to main event here at Prudential Center again.”

On April 16, 2022, Mielnicki outpointed veteran Dan Karpency at AT&T Stadium in Arlington, Texas. He quickly returned to the ring in July 2022, earning a sixth-round stoppage over Jimmy Williams in their super welterweight bout at Brooklyn's Barclays Center. The 20-year-old Mielnicki battered his opponent throughout the frame until Williams’ corner stopped the fight 2:12 into the round.

Mielnicki was back in the ring on October 15, 2022, winning a 10-round unanimous decision over Limberth Ponce in a PBC headliner on FS1. Then on January 7, 2023, "White Magic" produced one of his finest performances to date, scoring a fourth-round knockout of Omar Rosales. Mielnicki’s onslaught came late in round three, as a series of power punches sent Rosales into the ropes late in the frame. Early in round four, Mielnicki’s attack forced Rosales’ corner to throw in the towel, with referee David Braslow waving off the fight 26 seconds into the round.