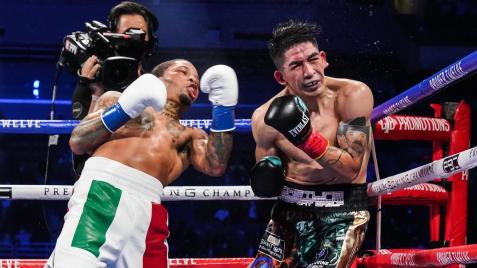 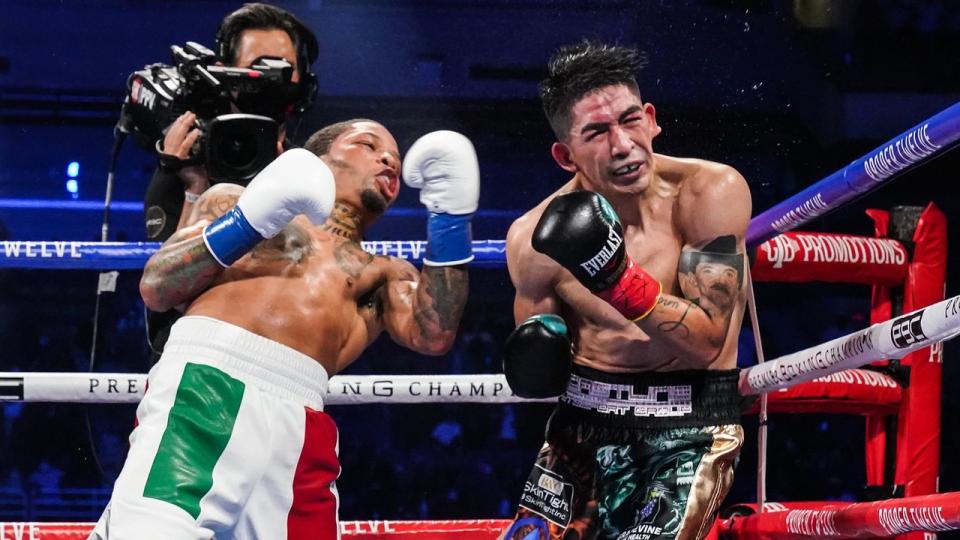 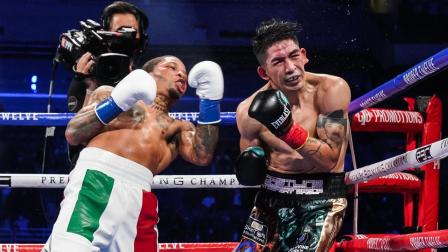 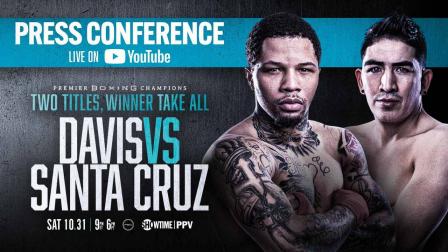 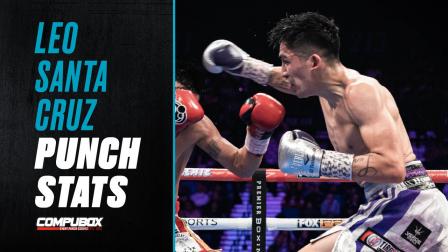 Leo Santa Cruz Vows to Win By Any Means Necessary

The four-division world champion plans to use every tool in his arsenal when he faces undefeated three-time champ Gervonta "Tank" Davis in a world title showdown Saturday night on SHOWTIME PPV.

Soft-spoken, thin and possessing a boyish smile, Leo Santa Cruz doesn’t appear to be a dangerous man. But much like his nickname “El Terremoto,” which means “the earthquake,” Santa Cruz shakes up his opponents with a seemingly endless torrent of pinpoint-accurate body punches, having earned world titles in three weight classes. After losing his championship status in 2016, the Mexican-American California native has now reclaimed his 126-pound world title.

Boxing in the blood

As the youngest of Jose Santa Cruz’s four sons, Leodegario Santa Cruz had almost no choice but to give boxing a try.

While most of his family was born in Mexico, Leo Santa Cruz was born and raised in the Lincoln Heights neighborhood of Los Angeles.

Jose Santa Cruz exposed all of his sons to boxing—Armando Santa Cruz is a former world title contender at 135 pounds—but Leo shined especially bright from an early age, winning a world amateur championship at 15 years old.

After nearly 150 amateur victories, Santa Cruz made his pro debut in October 2006, with a second-round knockout of Pedro Silva in Nogales, Arizona, just two months after his 18th birthday.

Bringing the noise at 118

Santa Cruz went 10-0-1 in his first 11 fights, but registered just two knockouts as he began his ascent in the 118-pound division.

He flexed his power over the next four fights, however, stopping all four opponents within four rounds, and earning a matchup in March 2011 with Stephane Jamoye, who had an impressive 20-2 record. Santa Cruz gained a sixth-round stoppage in exciting fashion, thrilling the crowd in Xalapa, Veracruz, Mexico.

He followed that victory with stoppages of formidable opponents such as Jose Lopez, Everth Briceno and Alejandro Hernandez to earn his first shot at a world championship.

In June 2012, Santa Cruz took on South African veteran Vusi Malinga for the vacated 118-pound world title. The 23-year-old Mexican native dominated his older opponent for 12 rounds, gaining a near shutout on the judges’ scorecards to take a unanimous decision.

Santa Cruz then defended his title three times in a four-month period that same year with stoppages of Eric Morel and Victor Zaleta, and a one-sided decision over Alberto Guevara.

In 2013, it was time to take a step up in weight. Santa Cruz vacated his title and made his 122-pound debut that May with a fifth-round stoppage of Alexander Munoz.

That win earned him a shot against 122-pound world champion Victor Terrazas in Carson, California, in August 2013, and Santa Cruz made the most of it.

Santa Cruz battered his countryman’s right eye and knocked him to the canvas twice as he threw 267 punches in less than eight minutes to gain a third-round KO, answering any questions about his power at that weight.

With his father and his older brother Antonio overseeing his training, Santa Cruz cemented his standing atop the 122-pound division, winning wide decisions over Cesar Seda in December 2013 and Cristian Mijares in March 2014 in defense on his title.

Time for another challenge

Fighting in a high-profile slot on the Floyd Mayweather Jr.-Marcos Maidana card in Las Vegas in September 2014, Santa Cruz again flashed his brilliance as he scored a second-round TKO of Manuel Roman with a vicious left jab-right hook combo.

After that fight, when answering questions about his next move, Santa Cruz said through a big grin, “I’m not scared of anyone.”

In January 2015, Santa Cruz gained an eighth-round TKO of Jesus Ruiz in Las Vegas to defend his title for the fourth time, and soon afterward announced his desire to move up to yet another weight division.

Fighting as part of the Mayweather-Manny Pacquiao pay-per-view in May 2015, Santa Cruz won his 126-pound debut with a 10-round unanimous decision over Jose Cayetano.

Santa Cruz's victory  over Cayetano set up a long-anticipated showdown in August with three-division champion Abner Mares in Los Angeles. Santa Cruz scored the first landmark victory of his career on August 29, 2015, when in a heated, passionate, 12-round war at the Staples Center, he out-gunned Mares en route to a Majority Decision victory.

The all-out war yielded a total of 2,037 combined punches thrown, according to CompuBox, and wen on to be named the 2015 PBC Fight of the Year.

Next up would be arguably the most interesting chapter of his career, as a July 30, 2016, title defense saw Santa Cruz matched up against former unified 122-pound champion Carl Frampton, who was making his 126-pound debut on neutral turf in Brooklyn, N.Y. In another 12-round firefight, Santa Cruz would walk away witht he first defeat of his professional career, as Frampton stunned many with a well-deserved Majority Decision win.

But Santa Cruz proved his championship mettle when he got a rematch with Frampton in January 2017, with Frampton coming across the pond again, but this time a little farther west to Las Vegas. There, Santa Cruz applied a slick gameplan and frustrated "The Jackal" over 12 rounds, returning the favor with a majority decision triumph and again becoming a recognized featherweight champ.

The revenge victory over Frampton, along with his recent body of work, cemented Santa Cruz as a truly elite 126-pound top dog, with several big fights coming up down the road.

After his revenge victory over Frampton, Santa Cruz scored an eighth-round TKO of Chris Avalos on an October 14, 2017 card that he shared with fellow 126-pound titleholder Abner Mares. Both champions scored decisivie wins setting up their June 9 rematch at Staples Center in Los Angeles.

In almost an exact replica stat-wise of the first fight that Santa Cruz won by majority decision in 2015, the three-division titleholder scored another win in another epic war—taking all three scorecards by way of 115-113, 116-112, and 117-111.

“It feels great. Abner is a great fighter. He left his heart out there. It was a tough fight but thank God we got the victory,” Santa Cruz said. “I had to be smarter, that’s why it was not a bigger war—but it was a good one.”

Similar to the first time the two Mexican-American warriors met, which resulted in more than 2,000 punches being thrown, a total of 1,992 totals punches were thrown in Saturday’s fight with Santa Cruz throwing 1,061 to Mares’ 931. Santa Cruz landed 357 punches compared to 208 for Mares.

A FIGHT FOR HIS FATHER AND HIS FANS

Santa Cruz was set to defend his WBA 126-pound title vs Houston’s Miguel Flores in his first fight under the new PBC on FOX deal, but Flores injured his ankle and was forced to withdraw.

Late replacement Rafael Rivera of Tijuana, Mexico proved to be a game opponent, going the distance—but Santa Cruz cruised to a dominating title defense via unanimous decision (119-109 on all three judges’ scorecards) in front of  5,137 fans at the Microsoft Theater at L.A. Live in Los Angeles.

“El Terremoto” thanked his faithful supporters, but dedicated the victory to his father and trainer, Jose Santa Cruz—who has been battling bone cancer for three years.

“It means the world to me,” Santa Cruz said. “The first thing I said when I stepped into the ring was, I didn’t want to let my dad down. I wanted to win so he could be happy and continue fighting against cancer, and I thank God and the fans for the support they gave me to win this fight.”

On November 23, 2019, Santa Cruz would make history yet again, comfortably outpointing Miguel Flores over 12 rounds to win the WBA World Super Featherweight title and become a four-division world champion. The bout was part of a FOX Sports pay-per-view headlined by the rematch between Deontay Wilder and Luis Ortiz, from the MGM Grand in Las Vegas, Nevada.

“Winning this title means the world to me,” Santa Cruz said. “This is all for the fans who support me. I didn’t feel myself today and didn't perform the way I wanted to. I'm going to get back in the gym and get a big fight in 2020.”

Santa Cruz was thorough and dominant.

“I’m glad I got the victory,” said Santa Cruz. “Miguel is a good fighter, he gave me a tough fight and he proved he's not a pushover. We put on a great battle. I want to stay at 130. We want the big fights in 2020. I want Gervonta Davis or Gary Russell Jr. I want to show the world I’m not scared of anybody.”

Santa Cruz would get his wish when he took on Davis Saturday, October 31, 2020 in front of fans at the Alamodome in San Antonio, Texas, live on SHOWTIME pay-per-view. The action was brilliant until the fateful sixth, when Davis broke through with a left uppercut, dropping Santa Cruz and becoming the first man to stop him. Despite the defeat, Santa Cruz showed his warrior's heart, giving as good as he got until he succombed.