Leo Santa Cruz defeats Abner Mares by unanimous decision in a rematch of their thrilling 2015 slugfest.

Santa Cruz (35-1-1, 19 knockouts) once again earned a decision over Abner Mares, a fellow Mexican multi-divisional champion who has made a home for himself in the Los Angeles area. Scores were unanimous for Santa Cruz -- 115-113 from Ray Danseco, 116-112 from Steve Weisfeld, and 117-111 from Zac Young. The fight seemed closer than their first affair in August of 2015 that saw Santa Cruz win by majority decision. Santa Cruz retained his WBA belt at 126 pounds in front of 12,505 fans.

The two combined for 2,038 punches Saturday night -- seven more punches than the two combined to throw in their first fight. Santa Cruz landed 357 of 1,061 punches and Mares landed 226 of 997 in the rematch.

Mares (31-3-1, 15 KOs) fought a better gameplan than the first fight, finding the mark with shorter shots in between Santa Cruz's wider shots in the early goings. Mares fought at the pace that favors Santa Cruz and held his own, building an early lead according to many ringside.

The third round saw both guys wobbled by each other's offense. First Mares was buzzed by a Santa Cruz combination and then came right back with his own offense. Santa Cruz then felt the power of Mares following a wicked combination.

Santa Cruz landed his best shots when he caught Mares moving backwards when Mares was done throwing a combination. Both dug heavy shots to the body.

Santa Cruz began to use his length in the fifth round, catching Mares with straight right hands from the outside. Mares and Santa Cruz traded a couple shots behind the head.

The tide started to head in Santa Cruz's favor in the second half of the fight as the pace seemed to wear on the 32-year-old Mares just enough for there to be more separation.

Santa Cruz suffered a cut near his right eye in the ninth round but it didn't bother him.

Santa Cruz started to pull away in the championship rounds. Mares had much less heat on his punches and was fluttering away with combinations. Santa Cruz was catching Mares flusher with his shots and doing more damage, which likely helped on the scorecards. 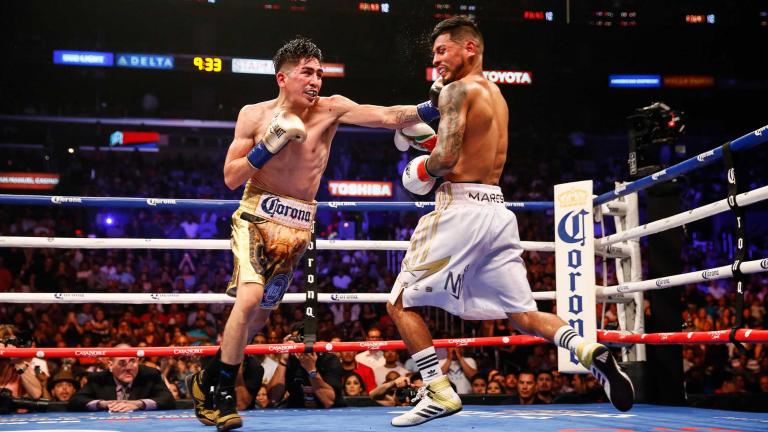