Miguel Flores wasn't cautious against Chris Avalos after receiving his first loss in his previous fight, and although his aggressiveness seemed to be serving him well this time around, he was defeated again in a manner that proved difficult to accept. 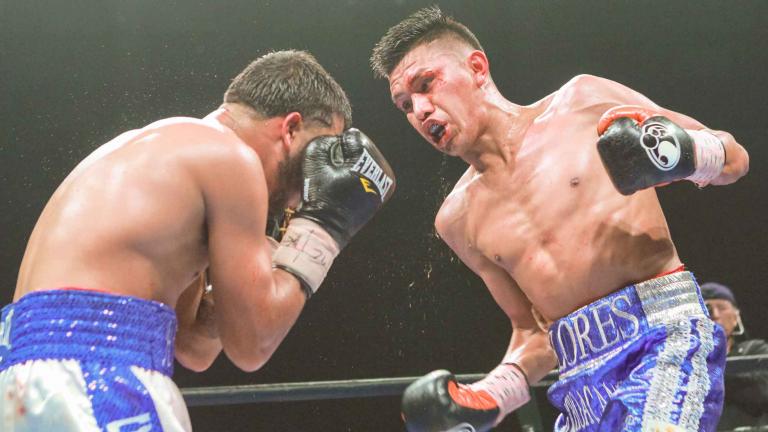 Although Miguel Flores gained a third-round knockdown and was ahead on all three scorecards through five rounds, a cut above his left eye contributed to Chris Avalos being awarded a controversial fifth-round TKO. (Hosanna Rull/Premier Boxing Champions)

Flores gained a third-round knockdown and was ahead on all three scorecards, but a cut above his left eye was deemed too serious for him to continue after five rounds and Avalos was awarded a controversial TKO victory in an action-packed 126-pound showdown.

Flores went right after Avalos at the opening bell, and the two engaged in a close-fought, back-and-forth contest for almost the entire bout. Avalos, a former 122-pound title challenger, gave as good as he got for the first two rounds, and never stopped moving forward.

Flores blasted his opponent with a barrage in Round 3 and forced him to a knee, but Avalos rebounded quickly and remained competitive throughout the fight.

A laceration opened above Flores’ left eye from what seemed to be a headbutt in the fourth round. When the ringside doctor ruled after Round 5 that Flores was unable to continue because of the cut, Avalos was given the stoppage victory amid some confusion after referee Bruce McDaniel ruled that the cut had been caused by a punch.

Flores, who turned 25 Monday, was ahead 48-46 on all three scorecards at the time of the stoppage, but instead suffered his second straight defeat after being stopped by Dat Nguyen in Round 6 in February.

Avalos ended a two-fight skid in his first bout in nearly 15 months, and won for the first time since earning an eight-round unanimous decision over Rey Perez in August 2015. The 27-year-old Lancaster, California, native said afterward that he would be willing to consider a rematch with Flores.

The controversial ending overshadowed what had been a very good action fight. Both guys ate monster shots that would have put many fighters on the canvas, but Flores and Avalos were undeterred as they continued to go at it.

If Flores was at all bothered by being knocked out by Nguyen earlier this year, he didn't show it. Instead of boxing from the outside like his corner probably would have preferred, he slugged it out with the battle-tested Avalos, who was stopped in the fifth round by Carl Frampton in their 122-pound world title bout in February 2015.

This week in PBC Jabs, host Jordan Hardy recaps two dramatic fight cards, including Omar Figueroa Jr.’s crushing stoppage of Robert Guerrero in a 147-pound firefight, and checks in with three-division world champion Mikey Garcia before his 140-pound showdown with Adrien “The Problem” Broner on July 29.

Miguel Flores wasn't cautious against Chris Avalos after receiving his first loss in his previous fight, and although his aggressiveness seemed to be serving him well this time around, he was defeated again in a manner that proved difficult to accept.

A boxer’s journey to the top is usually a step-by-step climb. Sometimes all the rungs on the ladder are as strong as granite; sometimes one or two are as sturdy as cheap plastic. Trouble is, a fighter doesn’t know which rungs are rock solid and which are potential traps until he completes each step—something Miguel Flores recently learned the hard way.