Rau’shee Warren made a huge opening statement in his first 118-pound title defense, but it wasn’t enough to withstand the unyielding attack of Zhanat Zhakiyanov. 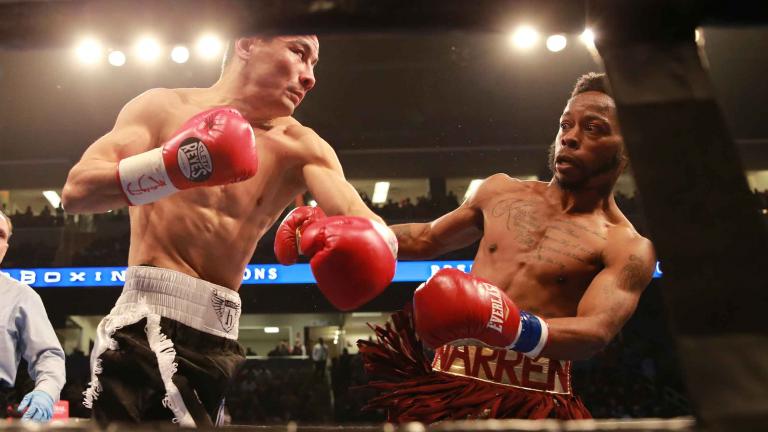 Fighting just 200 miles from his hometown of Cincinnati, Warren gained two first-round knockdowns to secure an early advantage. However, Zhakiyanov stayed the course as he wore down Warren over the late rounds and earned the championship via split decision.

Competing for the first time in the United States, the 33-year-old Kazakh slugger won the title in his first fight in 15 months as he used a high-volume assault to overwhelm Warren in the second half of the bout.

Warren, 29, showed off his superior hand speed and some surprising power in Round 1 when the southpaw floored Zhakiyanov with a left uppercut and then dropped him again seconds later with a right hook.

Zhakiyanov began to make his charge in Round 3 when he landed a couple of right hands that preceded Warren going to the canvas, but referee Gary Rosato ruled it a push. “ZZ” then landed some strong shots right before the bell against Warren, who began bleeding from the nose.

Zhakiyanov is listed at 5-foot-7, but he was clearly shorter than the 5-foot-4½ Warren. That didn’t prevent the challenger, though, from applying constant pressure and landing solid blows with both hands as the champion’s punch rate decreased significantly after the early rounds.

The Kazakh continued to walk through Warren’s punches and force him into retreat through the middle rounds, cutting off the ring and bludgeoning the three-time U.S. Olympian to the head and body.

Zhakiyanov stumbled and nearly went down as a result of a jolting seventh-round left uppercut, but Warren couldn’t keep the rugged challenger from imposing his will.

Warren tried to re-establish his jab and rely on his movement in the later rounds to fend off his opponent, but Zhakiyanov finished strong as he continually pinned the champion against the ropes and fired away with an unrelenting barrage of punches.

Warren lost for the second time in his last three fights. The American won the world title last June by majority decision in a rematch with Juan Carlos Payano after dropping a split decision to the Dominican in August 2015.

This week in PBC Jabs, host Jordan Hardy recaps an exciting championship doubleheader, chats with Danny Garcia in the lead-up to his 147-pound title unification against Keith Thurman and previews our upcoming fight cards.

Rau’shee Warren made a huge opening statement in his first 118-pound title defense, but it wasn’t enough to deny the unyielding attack of Zhanat Zhakiyanov.

Rau’shee Warren is not known for his power, but whether or not he can stop Zhanat Zhakiyanov might be the deciding factor in their 118-pound title bout.