Errol "The Truth” Spence Jr. didn't waste any time against Phil Lo Greco, knocking him down in the second round before scoring a TKO in the third to stay unbeaten.

Errol Spence Jr. said coming into this fight that despite Phil Lo Greco replacing Roberto Garcia on Thursday, the mission was the same: Search and destroy.

He searched for one round, then he destroyed for two. Lo Greco came out and unloaded on Spence in the first, working the body with abandon. But Spence walked through all of it, and when they came out for the second, he put his foot on the gas and didn’t let up.

Spence hammered away through the second and slowed Lo Greco before grinding him down for good in the third. He dropped the hammer, a booming right hand to the side of the head that put Lo Greco on the deck around 35 seconds into the round.

He finished the job a minute later when he got Lo Greco on the ropes, the crowd shouting with every thundering shot that Spence was landing at will. Referee Robert Byrd saw enough, and waved it off with 1:10 to go. 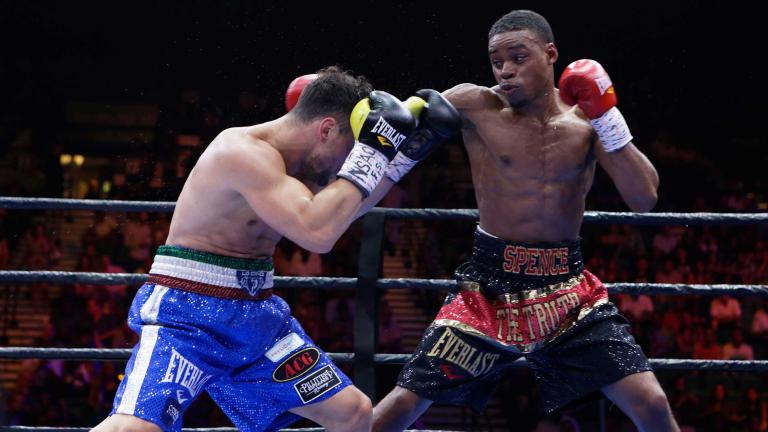 From prospect to contender: Errol Spence Jr. is the PBC Rising Star of the Year

Phil Lo Greco sucked in a deep, futile breath, looking like he didn’t know what just hit him, even though the brute behind said blow was standing right in front of him, poised to deliver plenty more.

Veteran fighter. Replacement fighter. It could have been a robot fighter for all Errol Spence Jr. cared. Whoever was climbing in that ring short of a time-traveling Sugar Ray Robinson was getting put on the ground Saturday night at the MGM Grand Garden Arena in Las Vegas.

Everyone ring ready for Broner vs Porter, Spence vs Lo Greco