Sergey Lipinets wore down Lydell Rhodes over 10 rounds and won a unanimous decision to remain unbeaten.

Lydell Rhodes vowed to make Sergey Lipinets “look like a C-level or D-level fighter,” but it was the Kazakhstan native who received the passing marks in their 140-pound bout at The Venue at UCF in Orlando, Florida. 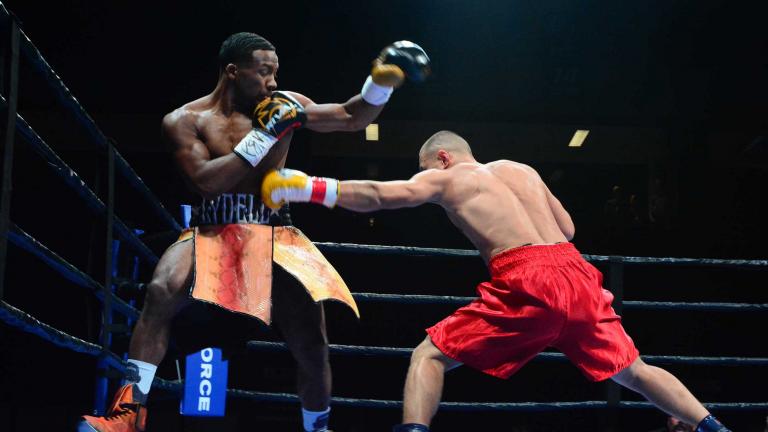 Sergey Lipinets works inside with his left hand during his unanimous-decision win over Lydell Rhodes in Orlando, Florida. (Todd McLennan/Premier Boxing Champions)

The 5-foot-7 Lipinets initially had trouble getting a bead on the 5-4½ Rhodes, but he eventually cut the distance, cut of the ring and simply broke down the smaller man over the course of the fight.

Rhodes circled and moved in and out behind a rapid-fire jab over the first couple of rounds as Lipinets initially failed to cut off the ring while searching for a spot to land his right over an occasional jab of his own.

Although the fighters exchanged toe-to-toe over the final 10 seconds of the first round, Lipinets was largely frustrated early on by Rhodes, who continually beat him to the punch from distance.

Rhodes added three more right hands in the fourth, standing his ground more as Lipinets’ corner implored their fighter to cut the distance.

On separate occasion in the fifth, Rhodes connected on three straight jabs to set up follow-up right hands. But Lipinets timed the Oklahoma native more in the seventh and eighth, finding the mark with several big right hands and a few follow-up combinations.

Called for an unpenalized low blow early in the ninth, the hammer-fisted Lipinets stunned his opponent with a head-swiveling right hand within the final 30 seconds as Rhodes clung on in desperation to finish the round.

Lipinets, who now fights out of Russia, badly wobbled Rhodes in the ninth with a head-swiveling right hand, and nearly finished him in the 10th with a succession of big rights and an assortment of other blows.

Referee James Warring penalized Rhodes for excessive holding in the final round as the fighter simply tried to survive the round.

Tony Thompson vowed to “methodically” dismantle Malik Scott at The Venue at UCF in Orlando, Florida, on Friday, but it was Scott who owned the ring most of the night in the meeting of veteran American heavyweights.

On Halloween Eve, Lydell ‘Hackman’ Rhodes plans to carve up Sergey Lipinets in battle of unbeatens

If you spot Lydell Rhodes out and about—say, at a restaurant or grocery store or pumping gas—you’ll see an ordinary dude. Throw him in the squared circle, though, and that’s when his alter ego manifests.

Lydell Rhodes was going about his business in a Las Vegas gym recently, training for his upcoming fight against Sergey Lipinets. Then in walked the gym’s owner—some dude named Floyd Mayweather Jr.—and after the two exchanged fist bumps, Rhodes took his training session to another level.