Stepping into the ring against Juan Carlos Payano is the equivalent of taking an open-book math exam … while also holding the answer key … and yet somehow still flunking the test. Facing the former 118-pound world champion in Las Vegas, Alexis Santiago became the latest student who failed to make the grade. 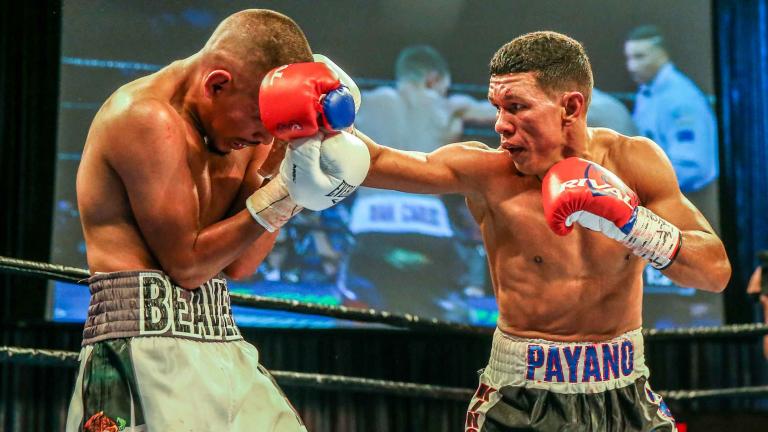 Implementing the aggressive, rough-and-tumble, high-volume punching style that has defined his seven-year pro career, Payano outworked and outclassed Santiago to win a 10-round unanimous decision.

In securing his second consecutive victory since losing his world title in a rematch with Rau’shee Warren in June 2016, Payano nearly pitched a shutout, prevailing by scores of 100-90 and 99-91 twice.

As is always the case when he fights, Payano might as well have had his game plan written on his chest for Santiago—and all the world—to see: come forward like a bull; mix it up in close; throw punches from every conceivable angle; answer every one of your opponent’s punches with about 10 of your own; lather, rinse, repeat.

Despite having the answers ahead of the test, though, Santiago—like many before him—struggled to solve the equation.

As expected, Payano established control in the opening two rounds, aggressively attacking Santiago while landing an array of shots and absorbing little in the way of return fire. In fact, Santiago, who was coming off a career-long layoff of nearly a year, started tentatively as he clearly struggled to figure out the many complex angles from which Payano’s punches were coming at him.

By Round 3, however, Santiago began to have more success timing the onrushing Payano, at one point landing a sweeping right cross to the forehead that snapped the former champ’s head back. The blow didn’t hurt Payano, but it did open a cut above the southpaw’s left eye.

The cut reopened early in the fourth round, which featured solid two-way action. At that point, Santiago was very much in the fight. But after a somewhat lackluster fifth round, any possibility of a significant upset quickly evaporated in the hot, dry Vegas air.

Perhaps taking advantage of a second wind, Payano dialed up the punch volume starting in Round 6, stalking Santiago across the ring and unleashing one blinding combination after another. Not all of Payano’s blows hit pay dirt, but those that did began to leave noticeable welts and bruises on Santiago’s face. They also appeared to sap the 26-year-old’s energy and crush his will.

Save for a couple of decent flurries in the final two rounds, Santiago offered little resistance to Payano’s relentless attack. And even though Payano had the fight well in hand down the stretch, he never took his foot off the gas, even exchanging with Santiago in the waning seconds of the bout.

When it was over, it was clear whose hand would be raised, as Santiago won just a single round on two of the judges’ cards.

Now that he’s disposed of Santiago, which follows a stoppage victory over Isao Gonzalo Carranza in January, Payano is eyeing bigger and better things—namely, a chance to regain his 118-pound title. Or challenge for a crown at 122.

PBC Jabs gets up close with Mayweather, gives the rundown on a full week of fights

This week in PBC Jabs, host Jordan Hardy pays a visit to Floyd Mayweather Jr. before his highly anticipated showdown with Conor McGregor in Las Vegas on Saturday night, and both recaps and previews this week’s PBC fight cards, including Friday night’s FS1 event featuring Sergiy Derevyanchenko versus Tureano Johnson in a 160-pound title eliminator.

Payano puts on impressive performance in one-sided victory over Santiago

Stepping into the ring against Juan Carlos Payano is the equivalent of taking an open-book math exam … while also holding the answer key … and yet somehow still flunking the test. On Tuesday night, Alexis Santiago became the latest student who failed to make the grade.

Juan Carlos Payano has already accomplished the one goal that’s atop every professional boxer’s to-do list: become a world champion. Now Payano is determined to check off box No. 2 on that list: do it again.