Erislandy Lara defended his 154-pound world title for a fifth time with a fourth-round knockout of ex-champ Yuri Foreman.

“The American Dream” was an absolute nightmare for former champion Yuri Foreman. 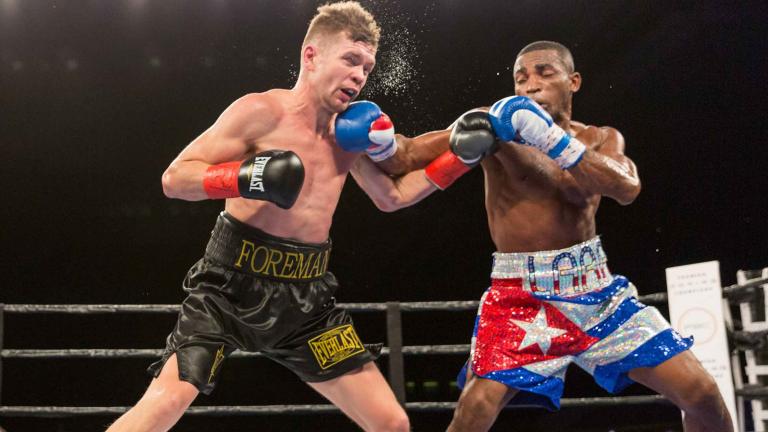 In picking up his fifth consecutive victory—and just his second stoppage win in 3½ years—Lara successfully defended his title for a fifth time. It was also the Cuban southpaw’s second victory at Hialeah Park Racing & Casino, site of his last knockout (a third-round TKO of ex-champion Jan Zaveck in November 2015).

Despite giving up two inches to the 5-foot-11 Foreman, Lara stalked the former 154-pound titleholder, who alternately jumped in and out from distance but managed to only land an occasional jab and right hand over the champion’s right jab.

After a tentative first round, the 33-year-old Lara picked up the pace in the second, with a pair of stiff, straight lefts bobbling Foreman’s head near the end of the stanza.

Lara then gained a dubious third-round knockdown when referee Samuel Burgos ruled that Foreman hit the canvas from a double-straight left to the chin, even though TV replays showed the fall was the result of the fighters’ legs getting entangled.

There would be no questioning the blow that ended the fight, however.

As the 36-year-old Foreman walked in and missed with a punch, Lara ripped a pinpoint counter left uppercut that first hit Foreman square on the chest before connecting flush on his chin.

Foreman immediately dropped to all fours, and although he tried several times to get to his feet, his legs wouldn’t cooperate. By the time Foreman finally got upright, it was too late, as Burgos reached the count of 10, with the official end coming at the 1:47 mark.

This week in PBC Jabs, host Jordan Hardy recaps our first two fight cards of 2017, goes a round of Rapid Fire with former three-division champion Leo Santa Cruz and looks ahead to the Keith Thurman-Danny Garcia title unification fight.

“The American Dream” turned out to be an absolute nightmare for former champion Yuri Foreman on Friday night.

The last time Erislandy Lara fought in Miami, he almost had more difficulty dodging raindrops than he did punches.