Jacobs won by second-round TKO when Mora injured his right ankle on a knockdown and could not continue.

What started out as an action-packed bout ended quickly when Sergio Mora injured his ankle on a second-round knockdown and was unable to continue, giving Daniel Jacobs a win by technical knockout.

Mora considered himself to be Jacobs’ most difficult opponent to date, but the former 154-pound champion was proven wrong as a result of a bizarre ending.

The end came after Jacobs landed a right hand with 27 seconds left in the second round against Mora, who while leaning right to avoid the blow crumpled to the canvas, limped when he arose and complained of hearing a “pop.”

Referee Gary Rosato ruled that Mora could no longer continue, waving an end to the fight at the 2:55 mark of the second round as Mora was removed from the arena with an apparent broken ankle. 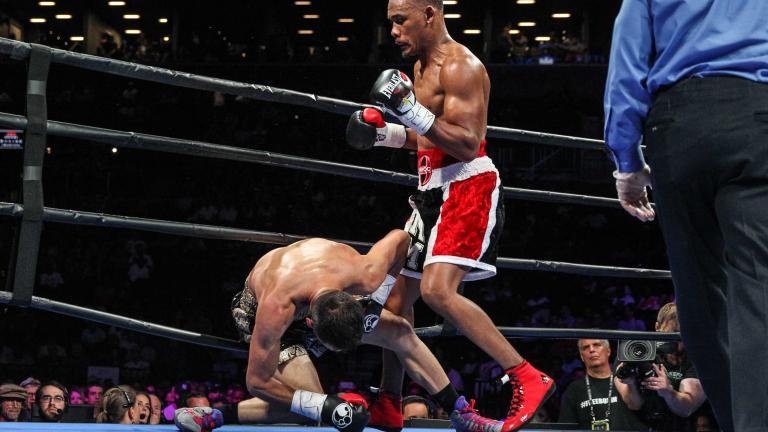 After a right from Jacobs in the second round, Mora crumpled to the canvas while leaning to avoid the blow. Mora complained of hearing a "pop," referee Gary Rosato waved an end, and Mora was taken out. (Lucas Noonan / Premier Boxing Champions)

In this week's PBC Jabs, host Jordan Hardy looks at a potential GGG-Daniel Jacobs clash, catches up with Robert Easter Jr. after his world title-earning victory over Richard Commey, and interviews unbeaten Domonique Dolton before his showdown with fellow 154-pound prospect Justin DeLoach.

As the bad blood boils over, Jacobs and Mora ready for rematch

Usually when fighters engage in a war of words, it’s nothing more than hype to help sell a fight. In the case of Daniel Jacobs and Sergio Mora, the vitriol is very real.