A game-changing right hand saved the day for Willie Nelson, who seemed headed for defeat at the fast hands of Tony Harrison, who was leading on all three judges’ scorecards prior to getting stopped in Round 9.

There was plenty of bad blood leading into the fight, including a skirmish at the press conference Thursday, but it didn’t translate to a lot of good exchanges early on.

Throughout the fight, Nelson was tentative offensively. A tall, lanky presence at 6-foot-3, Nelson used his height and reach advantage to fight from a distance, but he seemed reluctant to engage, preferring instead to counter Harrison, who was the busier fighter.

Harrison outlanded Nelson and pressed the action most rounds. But in Round 9, Harrison got by a massive right hand from Nelson, followed up by a hard left an another right which sent him to the canvas.

Harrison was able to beat the count and get back to his feet, but the referee stopped the fight with five seconds left in the round after Harrison failed to find his legs. 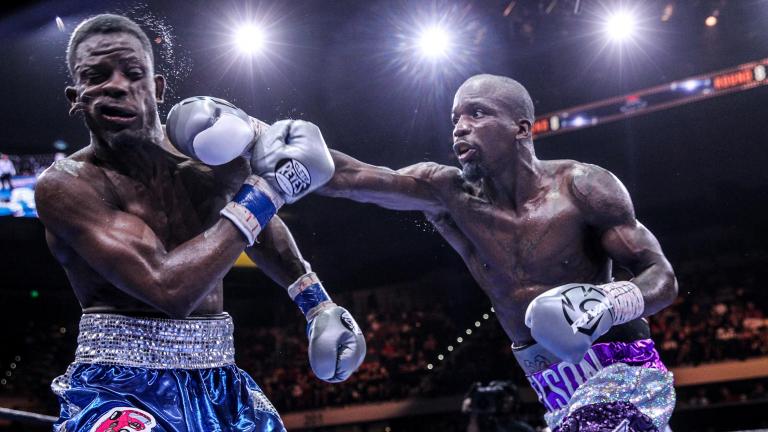 After suffering his first loss, 154-pound prospect Tony Harrison intent on making it his last

On a Saturday night in July, one second wiped out the 1,500 or so that preceded it. All it took was a well-placed right hand, a fist that doubled as an eraser, which didn’t stop time so much as negate it, cleaning the slate in a flash of leather.

It’s not over till it’s over: Willie Nelson scores dramatic come-from-behind TKO over Tony Harrison

Both Tony Harrison and Willie Nelson did plenty of jawing at each other in the lead up to their fight on Saturday at Tampa’s USF Sun Dome. But in the end, it was Nelson’s right hand that spoke the loudest.

Three fights, five rounds: It may take you longer to read about Tony Harrison’s Greatest Hits than it took him to actually complete them.