Tony Harrison rebounded from the first defeat of his career with an impressive 10-round unanimous-decision victory over Cecil McCalla in a 156-pound bout.

The last time Tony Harrison was in the ring, he suffered the first loss of his pro career when he essentially let his guard down in a fight he was dominating. Harrison insisted he wouldn’t make the same mistake Saturday in his 156-pound contest against Cecil McCalla in Houston, and he was true to his word—albeit barely.

After putting on a boxing clinic through the first eight rounds of the scheduled 10-rounder, Harrison got a bit careless in the ninth—the same round in which he was knocked out by Willie Nelson in July—and absorbed a couple of hard shots from McCalla.

This time, though, Harrison (22-1, 18 KOs) withstood the punishment, regained his composure and then survived another brief scare in the 10th before ultimately taking home a lopsided unanimous-decision victory. The lifelong Detroit native prevailed by scores of 100-90 and 98-92 twice, sending the 30-year-old McCalla (20-3, 7 KOs) to his third consecutive loss.

Using a wicked jab with tremendous effectiveness from the opening bell, Harrison thoroughly outboxed McCalla, who seemed more interested in covering up than actually fighting for most of the night.

When he wasn’t sticking his opponent with the jab, the 25-year-old Harrison was connecting with three-punch combinations and hard overhand rights that landed outside of McCalla’s guard.

After his corner repeatedly told him to let his hands go, McCalla finally obliged in the ninth round, landing two right hands that clearly rocked Harrison near the ropes. Harrison shook off the cobwebs and reverted to his bread-and-butter—the jab—to get out of harm’s way.

But as the ninth was coming to a close, McCalla again scored with a couple of hard shots as Harrison lay limp against the ropes, his fists closer to his knees than his face. Turns out Harrison was playing possum, as he returned fire with several heavy punches of his own before the bell sounded.

Harrison again let McCalla get unnecessarily close to him in the 10th, but again he weathered the assault and made it to the finish line. It marked the first time in nearly three years that the heavy-handed Harrison won by a decision, ending a streak 10 consecutive stoppage victories. 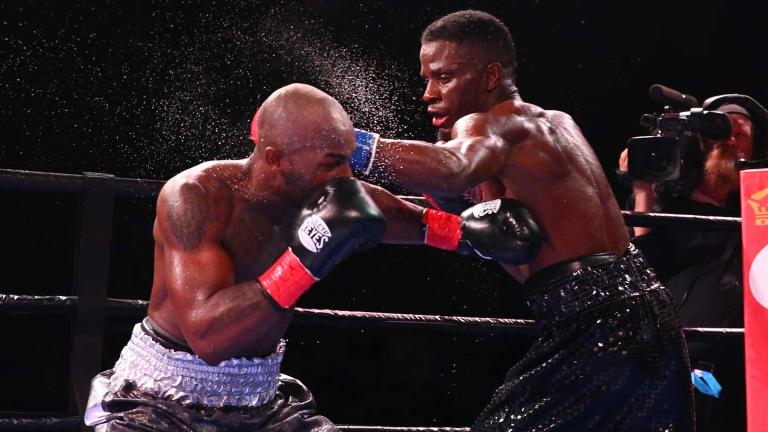 Tony Harrison sticks Cecil McCalla with one of the 186 jabs he landed in his unanimous-decision victory in Houston. (Josh Jordan/Premier Boxing Champions)

Jermell Charlo has let it be known that he intends to turn his hometown of Houston into a kind of boxing mecca. If he’s looking to advance his efforts with some marketing material, all he needs to do is blast out highlights of his performance Saturday night in the Space City.

It’s time to feast, and Tony Harrison’s talking appetites—not for food, but for that which puts food on the table: wins. He’s doing so because he’s about to face a man who, metaphorically speaking, is hungry enough to eat a horse chased by a rotisseried yeti.

Punching power is the athletic equivalent of an open bar: It’s totally, totally awesome, but if you get carried away with it, you could wake up naked in a field, searching for your pants and the nearest burrito dispensary.