Carl Frampton controlled the first half of the fight and won a split decision over Scott Quigg in their 122-pound title unification bout.

The highly anticipated “Battle of Britain” took a while to build into the frenetic fury that was expected, but it was Carl Frampton who maintained the upper hand throughout to win the 122-pound title unification bout. 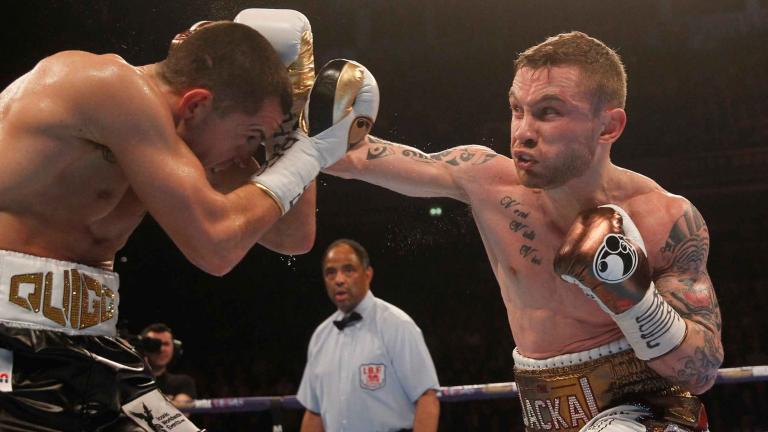 Frampton put on a brilliant display of tactical boxing to gain a split decision over Scott Quigg and remain undefeated before a spirited sell-out crowd of 21,000 at Manchester Arena.

Both boxers started cautiously and neither gained a real foothold in the opening three minutes as the fans chanted throughout the round.

In the second, Frampton appeared to settle into his stride and doubled up with the jab before landing a clean right hook toward the end of the round.

Frampton’s ramrod jab proved a potent force as Quigg was caught on several occasions in Round 4, with the Bury boxer relying on big, whaling hooks, none of which found the target.

In the fifth, the Irishman really looked to be enjoying himself as his superior technical skills kept Quigg seemingly paralyzed. Frampton backed up his jab with some decisive work, while Quigg could only reply with inaccuracy.

Quigg’s inaction continued into the seventh, as the crowd began to voice its disapproval. That seemingly spurred Quigg into action in the second half of the round, but Frampton got the better of a late exchange with a flurry of blows.

Quigg found his range at last in the eighth round as a stinging right hook clearly registered with Frampton, who acknowledged the shot.

Quigg enjoyed his best round in the ninth as two bludgeoning right hands caught Frampton flush on the whiskers, but neither punch seemed to have any lasting effect.

The 10th round was a barnstorming three minutes as both boxers pummeled away to the head and body. While Frampton was clearly the more accurate, as he had been throughout the contest, Quigg did land some telling shots of his own, underlining his own outstanding conditioning.

The 11th was also terrific theater as science largely went out of the window. Both fighters sought the conclusive finish and Quigg again landed with two big blows, but Frampton seemed to shake them off without much consequence.

With Quigg seeming to be making a late run in the fight, Frampton regained his bounce in the 12th round as he appeared determined to finish strong. The Irishman danced on his toes and used his jab to keep Quigg at bay until the final bell, when both fighters smiled and embraced.

Frampton earned winning scores of 116-112 from two of the judges (judge Levi Martinez had it 115-113 for Quigg) to take a split decision and consolidate two 122-pound world titles.

This week in boxing history, PBC highlights two of our own champions, honors two Fights of the Year, recaps the final chapter of a four-fight rivalry and celebrates a four-division world champion.

Frampton conquers the world as PBC’s Fighter of the Year

Carl Frampton already was a world champion at the start of this year, but his accomplishments in 2016 placed him at the top of the entire boxing universe.

Heading into their highly anticipated “Battle of Britain,” 122-pound champions Carl Frampton and Scott Quigg each promised to knock the other out. Neither came close to fulfilling that promise Saturday, but Frampton was at least on-point with his prediction that he’d exit the ring the victor.