Claudio Marrero waited 3½ years for a second world title opportunity. He needed all of 90 seconds to make the most of it. 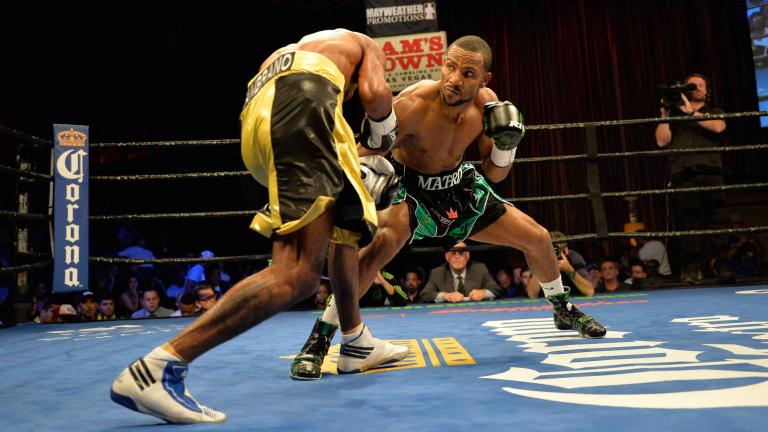 The victory was the heavy-handed southpaw’s eighth in a row since he lost a hard-fought unanimous decision to Jesus Cuellar in an interim championship bout on August 1, 2013.

In his second shot at the same title, Marrero barely broke a sweat in taking apart Zambrano and handing the Lima, Peru, native his first career defeat.

Marrero went on the offensive from the opening bell, attacking Zambrano to the body and stalking him around the ring. Then at the midway point of the round, with his opponent retreating toward the ropes, the 28-year-old Dominican flicked a jab that caught Zambrano on the chin, followed by a lightning-quick left hook that dropped the champion to all fours.

As soon as he hit the deck, Zambrano—with his forehead pressed to the canvas—began pounding his fist in frustration, but he never tried to make it to his feet as referee Vic Drakulich counted him out at the 1:30 mark.

Ring rust may have been a factor for Zambrano, who had fought just three times in the last four years, most recently in August 2015, when he defeated Jose Sanmartin by unanimous decision in the first defense of his interim title.

Then again, it wasn’t like Marrero had been excessively active either, having been out of action since last August. The difference was Marrero’s ring hiatus wasn’t voluntary. He said he spent months trying to make a fight with the champion, only recently getting Zambrano to sign on the dotted line.

Given the ferocious way in which Marrero dethroned Zambrano, it’ll be interesting to see who in the ultra-competitive 126-pound division—be it fellow titleholders Leo Santa Cruz, Abner Mares, Gary Russell Jr. or Lee Selby—will be eager to jump in the ring with the Dominican southpaw.

Claudio Marrero waited 3½ years for a second world title opportunity. He needed all of 90 seconds to make the most of it.

Years ago, a legend of the ring coined a phrase that gradually morphed into a cliché that nowadays rolls off the tongue of athletes in every sport. “To be the man,” pro wrestling icon Ric Flair once said, “you’ve got to beat the man.”

An injury to 200-pound champion Beibut Shumenov is putting an interim 126-pound title bout on a bigger stage.