Deontay Wilder was so impressive defending his world heavyweight title against Chris Arreola, he didn’t even need both hands to finish the job.

Wilder scored a fourth-round knockdown of Arreola and retained his championship before an adoring crowd in Birmingham, Alabama, when Arreola’s corner asked referee Jack Reiss to stop the fight after Round 8.

Wilder, who was fighting about an hour’s drive from his hometown of Tuscaloosa, Alabama, was dominant against Arreola despite injuring himself in the process. After the fight, the champ revealed that he broke his right hand before tearing his right bicep in “the third or the fourth round.”

Promoter Lou DiBella said Wilder was taken to a Birmingham hospital after the fight and would be “seeing a specialist this week to assess the damage to his right hand and right bicep muscle.”

It was late in Round 4 when Wilder rocked Arreola with a powerful right hand before knocking him to the canvas with barrage of sweeping punches. Arreola got up but barely survived the round as “The Bronze Bomber” bludgeoned him against the ropes as the bell rang.

Arreola took the fight on fairly short notice after Wilder’s scheduled defense against Alexander Povetkin in Moscow on May 21 was canceled less than a week beforehand when it was revealed the Russian challenger tested positive for a banned substance.

The defeat marked Arreola’s third attempt to become the first Mexican heavyweight champion in history, following his losses to Vitali Klitschko in September 2009 and Bermane Stiverne in May 2014.

With the cancellation of the Povetkin fight, the 6-foot-7, 226-pound Wilder was competing in the ring for the first time after a career-long six-month layoff.

Wilder, who honored Muhammad Ali on his trunks, worked marvelously behind his jab throughout the fight as he kept the 6-foot-3, 246-pound Arreola searching for openings.

The champ clowned at moments during clenches, swiveling his hips as if the fighters were engaged in dance, but he became more fierce with his jab and hooks in Rounds 7 and 8 before Arreola’s longtime trainer, Henry Ramirez, called for an end to the bout. 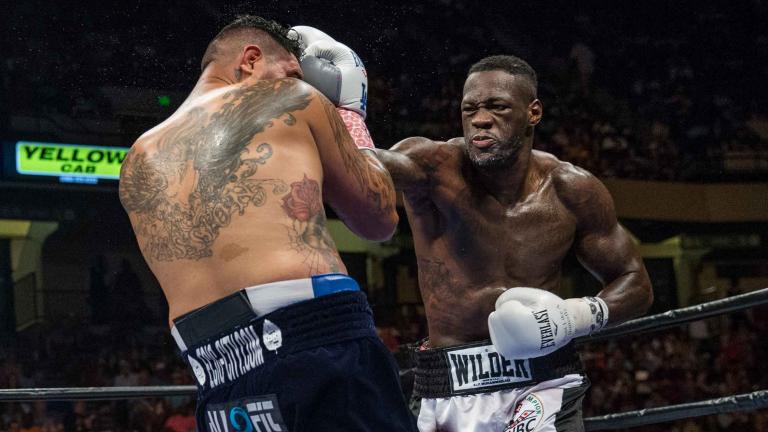 Despite breaking his right hand during the fight, Deontay Wilder was able to land enough power shots to stop Chris Arreola in eight rounds and retain his heavyweight title. (Ryan Hafey/Premier Boxing Champions)

After a dominating performance to retain his world title, heavyweight champion Deontay Wilder will have to sit out the rest of 2016 after suffering injuries during his TKO victory.

Deontay Wilder was so impressive Saturday defending his world heavyweight title against Chris Arreola, he didn’t even need both hands to finish the job.

He’s 6-foot-7, more than 220 pounds and has a chiseled physique. He also has 35 knockouts in 36 career fights. So, yeah, it’s pretty easy to view Deontay Wilder as superhuman with superhuman power.