Former world champion Miguel Vazquez worked behind his jab to frustrate Erick Bone and earn a 10-round unanimous decision.

Vazquez showed uncharacteristic aggression as he outboxed Erick Bone to win a 10-round unanimous decision in their 144-pound main event at Cowboys Dancehall in San Antonio.

Even while retaining his 135-pound title for four years, Miguel Vazquez employed an awkward, defensive style that, although it earned plenty of wins, didn’t always win over fans. But the 29-year-old Mexican confronted Bone from the opening bell, albeit cautiously, and landed a big right hand in Round 2 to set the tone.

Bone, who was fighting Vazquez less than two weeks after replacing the injured Felix Diaz, picked up the pace in Round 3 and landed several body shots and a big right hand over the next few rounds as he began to mix up his punches.

With many rounds being extremely close, Vazquez continued to pile up the points in the latter half of the fight as he worked behind his jab and consistently landed the cleaner punches against the 27-year-old Ecuadorian.

Bone suffered his third straight loss in a fight against a former world champion, having previously been defeated by Chris Algieri and Shawn Porter. 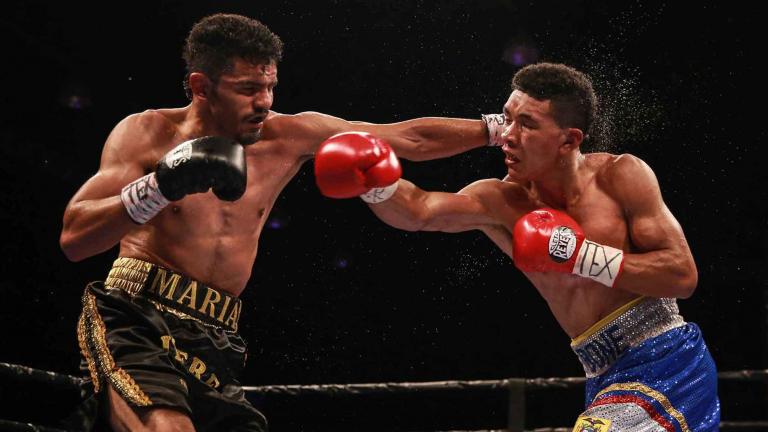 Miguel Vazquez, left, was effectively aggressive over 10 rounds as he earned a unanimous decision over Erick Bone in a 144-pound fight at Cowboys Dancehall in San Antonio. (Ryan Greene/Premier Boxing Champions)

Vazquez goes on the offensive, wins unanimous decision over Bone

Miguel Vazquez has long eschewed the traditional blood-and-guts approach of his Mexican countrymen. So don’t expect the onetime 135-pound champion to all of a sudden turn into a power puncher just because he’s jumping up in weight for Saturday’s 144-pound clash with Erick Bone.

Erick Bone was chilling in New York early last March when he got the call: The second-ever Premier Boxing Champions card was taking place in 24 hours in Ontario, California, and a replacement opponent was needed for former 147-pound champ Shawn Porter.