Keith Thurman outlasted Robert Guerrero in an instant classic. Thurman prevailed in a unanimous decision, but paid the price in the fight, suffering a hematoma that sent him to the hospital after the fight. With the win, Thurman remained unbeaten.

Keith Thurman won a unanimous decision against Robert Guerrero in a bloody, all-out battle which thrilled the crowd.

While Keith Thurman kept his undefeated record March 7 at MGM Grand Garden Arena in Las Vegas, he paid a physical price after an all-out war with Robert Guerrero.

After early rounds that were punctuated by a headbutt that caused Thurman to develop a hematoma over his left eye, Thurman amped up the intensity with a ninth-round knockdown that looked, momentarily, like it might put Guerrero down for good.

But the Gilroy, California, native showed tremendous heart in getting up off the mat and surviving a vicious flurry from Thurman to end the round. It seemed to switch something on in Guerrero, who came out with heavy lefts as he tried to return the favor.

After the fight, Guerrero, wearing dark sunglasses after receiving three stitches for his cut, said he wasn’t hurt. 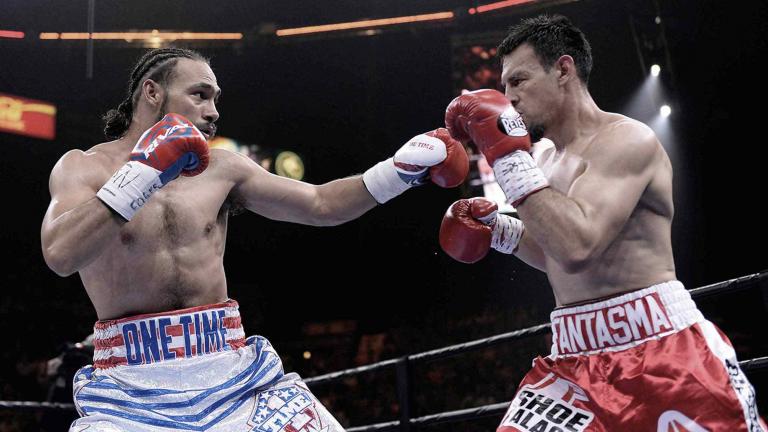 Keith Thurman kept his undefeated record with a UD victory over Robert Guerrero, despite suffering a hematoma

This Week in Boxing History: March 6-12

This week in boxing history, PBC celebrates our first fight card, honors the youngest world champion in history, looks back at a heavyweight legend’s debut, recalls an Upset of the Year and commemorates the “Fight of the Century.”

Presenting the 12 Rounds of Christmas: Round 10 (Keith Thurman vs Robert Guerrero)

Through nine rounds of their 147-pound showdown in the main event of Premier Boxing Champions’ debut on March 7, Keith Thurman dominated Robert Guerrero. Defeat seemed all but inevitable for “The Ghost,” who bled from a cut above his left eye as a result of Thurman’s nonstop battering.

Thurman vs. Guerrero: The Moment

If you missed March 7's all-out brawl between Keith Thurman and Robert Guerrero on NBC, you missed out on a great one. It's a fight that Thurman controlled through eight rounds, but his knockdown of Guerrero at 0:50 of the ninth round became The Moment of the fight.