Ishe Smith gained a second-round knockdown and earned a majority decision over Frank Galarza in a back-and-forth battle.

Ishe Smith may have his best years in the ring behind him, but he showed Frank Galarza that he’s far from over the hill. 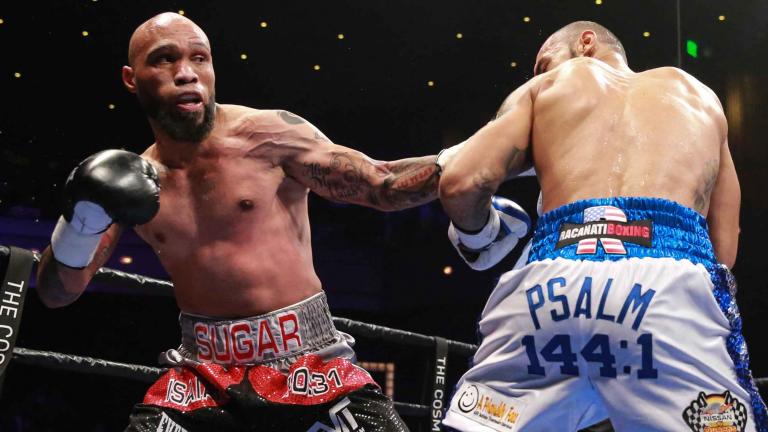 The 38-year-old former world champion proved too much for Galarza, using a second-round knockdown to propel him to a 10-round majority decision in a 156-pound bout.

Fighting in his hometown of Las Vegas, Smith showed himself to be too durable, too crafty and too resourceful against Galarza, whose second-half rally fell just short.

Smith gained the early edge when he caught Galarza with a counter right near the end of Round 2 and dropped the Brooklyn, New York, native. While Galarza quickly got back to his feet, Smith danced in the neutral corner and smirked at his opponent while referee Vic Drakulich gave the count.

Galarza, 31, was backed up early on as Smith doubled and tripled up on his jab, and followed with potent straight rights, but “The Brooklyn Rocky” became the aggressor in Rounds 6 and 7 as he hammered his older foe with hooks to the body.

In Round 8, Smith began to time Galarza’s attack and return fire with accurate counterpunches to the head and body. Galarza responded the following round with some bodywork of his own as began to throw more right-hand leads and hooks.

In the final round, both fighters exchanged heavy blows as the seconds ticked down and had to be pulled apart at the final bell.

It was the second straight win for Smith since he lost to Vanes Martirosyan last September, and kept alive his career streak of only having been beaten by fighters who have either won world championships or challenged for titles.

Ishe Smith may have his best years in the ring behind him, but he showed Frank Galarza that he’s far from over the hill.

It’s a tactic that’s been used pretty much since the birth of boxing: An undefeated fighter suffers his first loss and selects a creampuff opponent to rebuild his confidence and get himself back on the winning track.

Galarza thriving in the ring after overcoming childhood heartache

At an age when many children are playing video games and becoming involved in youth sports, Frank Galarza had already endured life-altering tragedies.