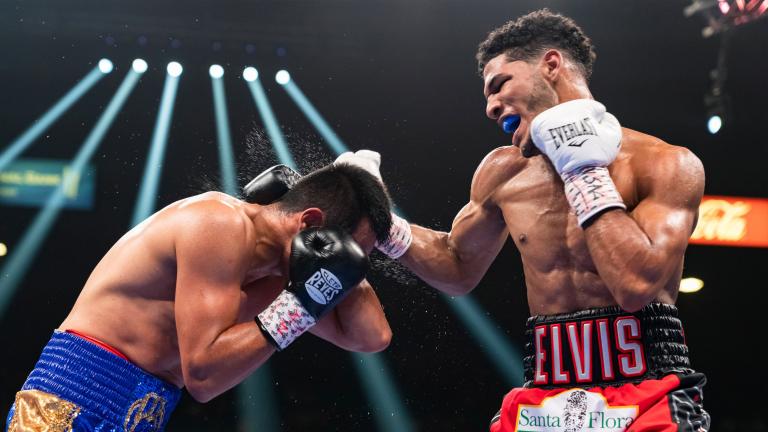 In the opening bout of the SHOWTIME PPV telecast, the hard-hitting Elvis Rodriguez (12-1-1, 11 KOs) bounced back from his first career loss in scintillating fashion, scoring a fifth-round knockout over the previously undefeated Juan Pablo Romero (14-1, 9 KOs) in a super lightweight bout scheduled for 10 rounds. Watch the stoppage HERE:

The Dominican southpaw Rodríguez landed a straight left hand that sent Romero to the canvas for the second time in the fight, and the second time in his career, at 2:49 in the fifth round. Resigned to defeat, Romero sat and watched as referee Robert Hoyle reached the count of 10. Rodríguez’s powerful left hand was also responsible for flooring Romero in the fourth round.

“I am fully aware that I started out slow in the first two rounds, but then I saw signs of wear and tear on his face and I gained the upper hand,” said the 25-year-old Rodríguez, who is trained by Hall of Famer Freddie Roach. “Romero is a fast starter by nature, but I’m the other way around. Then I was able to straighten out.”

After his slow start, Rodríguez out-landed Romero 47-36 in the fourth and fifth rounds. 159 of the 169 combined landed punches in the slugfest were power shots.

“I've got to give my opponent credit, it’s never just about you,” said the 31-year-old Romero, who represented Mexico in the 2016 Olympics. “I decided to not put my health on the line anymore in order to come back and fight again in the future. Tonight just wasn’t my night.

“The division already knows who I am after having seen most of my fights,” Rodríguez added. “I suffered a little setback, but I think that everyone knows that Elvis Rodríguez brings powerful, quality punches in each fight.”