A seven-time amateur National Champion in Mexico, Rey Vargas captured a world title at 122-pounds and now looks to do the same at 126 pounds. Read Bio 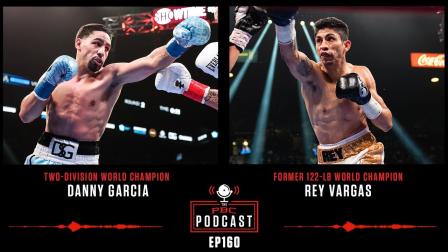 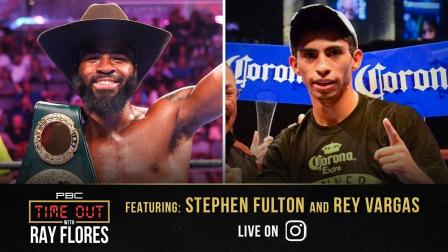 Two young stars join the show this week, plus a look at the top five PBC fighters under the age of 25.

Garcia and Vargas are ready to make it a scorching July as they prepare for their respective ring returns that month, plus the PBC 2022 Mid-Year Awards.

A seven-time amateur National Champion in Mexico, undefeated Rey Vargas captured the WBC super bantamweight title and now is on a mission to become a two-division world champion as he campaigns at super featherweight.

Rey Vargas experienced humble beginnings growing up in Mexico City but was coaxed into boxing by his first coach and father, Carlos, who instilled a solid fundamental foundation.

“[It] was very difficult for me – no money, but my dad managed to take me to school,” said Vargas to RingTV.com. “I will always thank him. I always loved sports, but boxing is great.”

Vargas went 128-6 as an amateur, capturing seven national championships in Mexico as well as a gold medal in the 2009 Pan-American Championships.

“My dad was a boxer, so I decided to continue,” said Vargas. “I was a national champion seven times and won the Pan-American gold medal.”

Vargas debuted as a pro in April 2010 with a first-round knockout of Claudio Palacios. He would go on to earn stoppages in 15 of his initial 16 victories.

Listed at nearly 5-foot-11 and significantly tall for a 122-pounder, Vargas often controls distance and smothers foes as they get close. His versatility is comprised of ranginess, speed, and a penchant for fighting on either the inside or outside.

Vargas sustains pace and rhythm, his piston jabs setting up an economy of combinations that incorporate hooks, overhand rights, crosses and uppercuts.

Vargas stepped up the opposition in 2016, beginning with a February third-round TKO of former title challenger Christian Esquivel. In June he shut out Alexis Bouremia Kabore over 12 and then returned in September to drop former champion Alexander Munoz four times on his way to a fifth-round TKO win.

“I’m in love with my career,” said Vargas. “Now I can pay back my dad and my mom with the money I make. It’s very satisfying.”

“My father got me into the sport. He was a former boxer and he trained me in camp, but I've had a friendship with 'Don' Nacho for a long time,” said Vargas. “My father guided me throughout my entire amateur career, and I wanted 'Don' Nacho to train me as a professional. Now I have both of them.”

Their first bout together occurred on February 25, 2017, versus Gavin McDonnell in McDonnell’s native UK. On the line was the vacant WBC World Super Bantamweight title.

Vargas fought just won in 2018, a 12-round unanimous decision over Azat Hovhannisyan in May. In February 2019, he took on hammer-fisted Franklin Manzanilla, who dropped Vargas in the second round with a head-swiveling left hook. But Vargas showed his warrior heart, climbing off the canvas to hurt Manzanilla several times and win another wide decision.

In July 2019, Vargas repeated his amateur victory over Kameda (117-110 three times), dropping the Japanese fighter to 36-3 (20 KOs) and ending his five-bout winning streak. Vargas played matador to the bullish, 5-foot-7 ½ “El Mexicanito,” using his jab to steer his opponent into his own arsenal of weapons.

Following his victory over Kameda, Vargas was sidelined by injuries. On November 6, 2021, he returned to the ring, making his featherweight debut against Leonardo Baez on the Canelo Alvarez-Caleb Plant SHOWTIME pay-per-view from T-Mobile Arena in Las Vegas.

Vargas showed no signs of ring rust in his first fight in over two years, cruising to a unanimous decision over Báez (21-5, 12 KOs) in a Mexico vs. Mexico matchup in the second fight of the telecast. Two judges scored the fight a shutout, 100-90, while the third judge scored it 99-91.

Vargas used his significant height and reach advantage to dictate the pace of the entire matchup. Vargas’ vicious body attack – he landed 71 body shots in the ten-round fight – broke down the much smaller and overmatched Báez, whose awkward style led to several accidental head clashes throughout the bout.

“I was surprised he went the entire distance," said Vargas. "He’s a good fighter and I don’t take anything away from him. I’m looking forward to my next fight being for a world title.”