Argenis Mendez is back in the hunt. 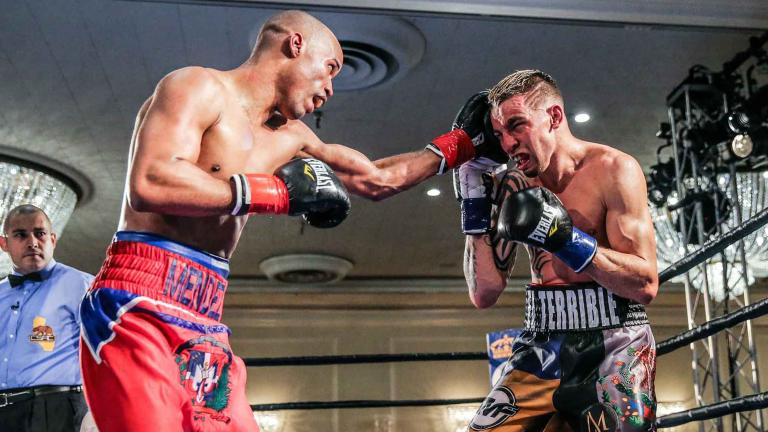 The former world champion ended a two-fight skid with a 10-round split decision over Ivan Redkach in the main event of a PBC on FS1 card in Studio City, California.

The difference in the 137-pound bout? A one-point deduction levied by referee Raul Caiz Jr. in Round 3 after Redkach headbutted Mendez, despite the absence of a warning preceding the foul.

Both men were desperate for a victory and fought like it, but Redkach walked into a lot of straight rights against a more patient boxer.

Certainly, each man badly needed a jump-start to their once promising careers. Redkach entered the bout on the heels of two lopsided defeats—a stoppage by Dejan Zlaticanin and a wide unanimous decision against Tevin Farmer—along with a draw in his previous five fights.

With his career now at a crossroads following a promising amateur career that spanned 300 fights, the 31-year-old Ukrainian, who has lived in Los Angeles since 2009, had a hard time accepting defeat, especially after scoring an apparent knockdown right before the end of Round 6 that Caiz ruled a slip.

Redkach did press the action throughout the fight, but Mendez turned the aggression against him with plenty of sharp counterpunches off his back foot. The 30-year-old Dominican, who lives in Brooklyn, New York, also was the far more accurate puncher.

Much like his opponent, Mendez also needed a win to stay relevant in the 135-pound division after being knocked out by current world titleholder Robert Easter Jr. and dropping a unanimous decision to rising British contender Luke Campbell last year.

The former 130-pound champion got started early with a body shot that caught Redkach's attention in Round 2.

Redkach continued to pour on the pressure, but Mendez was able to expertly duck and dodge the wild shots much of the time before responding with short, straight rights down the pipe.

Redkach can make an argument about the missed knockdown, which would have swung the result to a draw, but the final verdict seemed to be the correct one, though, as Mendez appeared in control for most of the fight and finished strong, sweeping the final two rounds on all three scorecards.

Mendez hurt Redkach badly with a right hand in the 10th and looked to be on the verge of gaining a stoppage, but Redkach managed to clinch enough to make it to the final bell.

Argenis Mendez is back in the hunt. The former world champion ended a two-fight skid Tuesday night with a 10-round split decision over Ivan Redkach in the main event of a PBC on FS1 card at the Sportsmen's Lodge Event Center in Studio City, California.

There are a lot easier ways for Ivan Redkach and Argenis Mendez to find their way to a televised bout these days. Neither are interested in the easy road, however, as they see each other as the perfect springboard to return to title contention.

Ivan Redkach has been referred to as a “Mexican Ukrainian” because of his aggressive style in the ring, and the slugging southpaw has even worn trunks bearing the colors of the Mexican flag in more than one fight.