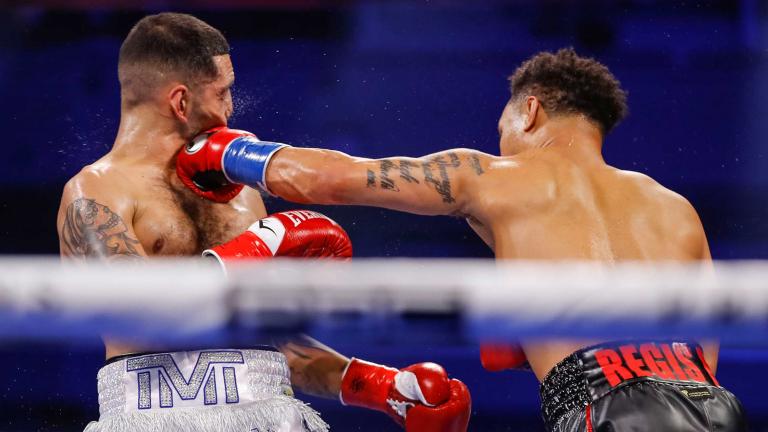 Former world champion Regis Prograis (25-1, 21 KOs) took the first step to getting back on top of the 140-pound division, scoring a third-round stoppage of Juan Heraldez (16-1-1, 10 KOs) in the second bout of the night. Watch the stoppage HERE.

In the third round, the fight changed in an instant as Prograis took advantage of Heraldez keeping his hands too low by landing his most dangerous weapon, a dynamite left hook that sent Heraldez sprawling to the canvas. When Heraldez got back to his feet, Prograis, who was born and raised in New Orleans but now fights out of Katy, Texas, sensed his opponent was in danger and pounced on Heraldez, forcing referee Rafael Ramos to step in and stop the action at 1:23 of round number three.

On Friday, Prograis, who lost a 140-pound title unification fight to Josh Taylor last October, weighed in over the 140-pound limit.

“I’ve been out of the ring for a year so I think that had some effect on me not making weight,” said the 31-year-old Prograis. “There’s no excuses, but the bubble also had some effect. Mainly it was the layoff though. My body wasn’t adjusted to making the weight again.

In the buildup to the fight, Prograis repeatedly stated he felt he was still the best in the world at 140 pounds and vowed to get his belt back.

“I still feel like I’m the best at 140,” Prograis reiterated to SHOWTIME’s Mauro Ranallo following the fight. “I’m going to keep proving it every time I fight. Me and Josh Taylor had a close fight, and I think if it had happened in the U.S. I would have won. We know that one day we’ll have to rematch at 140 or 147.”

The Las Vegas-based Heraldez, who is signed to Mayweather Promotions, was disappointed he didn’t get the chance to continue the fight despite landing just 12 total punches landed compared to Prograis’ 35.