In a hard-hitting contest fought at 144 pounds, Lamont Peterson hands Felix Diaz his first professional defeat with a 12-round majority decision.

Lamont Peterson was on the wrong end of a harrowing majority decision his last time out against Danny Garcia. On Saturday afternoon, he landed on the right side of a tight fight, as he pulled cards of 116-112, 117-111 and 114-114 to knock off Felix Diaz in front of the home crowd in Fairfax, Virginia.

The previously unbeaten Diaz, a gold medal-winning Olympian for the Dominican Republic, proved a stiff test despite absorbing a lot of punishment, particularly early on. But Diaz (17-1, 8 KOs) kept on going, always fighting off the ropes and out of corners by using precision counters and quick feet.

Peterson (34-3, 17 KOs) was consistently effective inside and out, though, and when the smaller Diaz did venture inside, Peterson often made him pay with punishing body shots.

Peterson also proved the far more accurate fighter, landing 33 percent of his shots to Diaz’s 22.1 percent. That was enough for the judges to award the former champion his third victory in his last four fights. 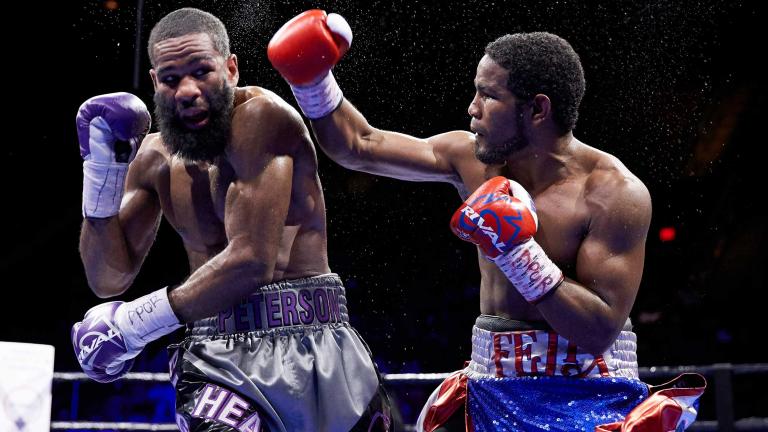 Lamont Peterson has been through two tough fights at catchweights between 140 and 147 pounds this year, and been on both sides of majority decisions. He lost a close one to Danny Garcia in April, but righted himself Saturday at EagleBank Arena in Fairfax, Virginia, with a win over a game Felix Diaz.

Lamont Peterson ready to move on and face Felix Diaz

A tight split decision, where four total rounds across three cards proved the margin of victory, is the kind of haunting loss that could leave you sitting alone in the dark at 4 a.m. watching fight replay after fight replay.

Lamont Peterson grinds to get the mental edge in the ring

When Pope Francis came to Washington, D.C., at the end of September, it was the kind of thing that shut the city down. Presidents? Oh, the nation's capital has presidents to spare. Those guys are always hanging out on Pennsylvania Avenue.