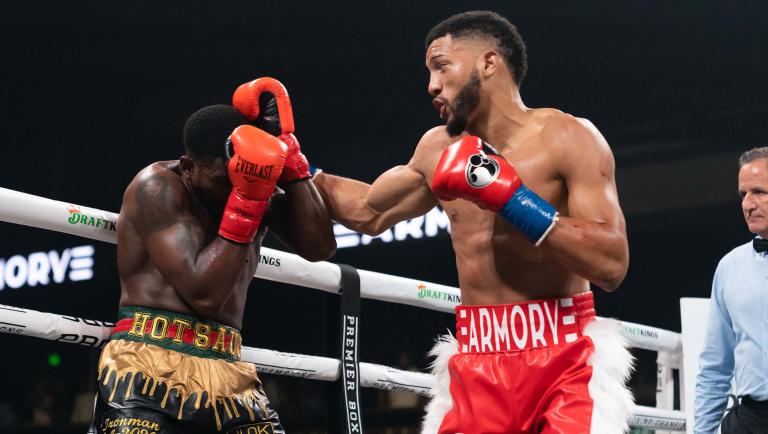 “I’m excited,” said Morrell. “Thank you everyone for coming out to The Armory. I’m just happy, man. I’m happy. I’m so excited every time I fight in my new home in Minnesota. I made this place my home.”

Competing in his third-straight bout at The Armory, Morrell gave his fans what they came out to see, stepping to Henderson early and often and putting his opponent on the defensive. Morrell showed a dedicated intention on attacking his opponent’s body, racking up a 26-3 edge in body punches landed, before mixing it up with hooks and uppercuts.

Henderson was game for the challenge, hanging on the ropes and slinging counters to try to deter the charging Morrell, but was overwhelmed by the punching accuracy of Morrell (37% to 11%). Late in round three, Morrell broke through for the first time, connecting on a right hook that left Henderson visibly hurt on the ropes.

“We knew that he wanted to come out strong like he did, but we wanted to show that his punches weren’t doing anything,” said Henderson. “We were picking off most of those shots. We were trying to wear him out, and the game plan was working but he landed some shots and the referee called it.”

Morrell continued to swing aggressively throughout the final moments of the round, although Henderson was able to withstand the punishment and stay on his feet until the bell rang. While Henderson made it out for round four, Morrell remained patient until he found an opening and landed his right hook, hurting Henderson again and eventually forcing referee Luis Pabon to waive off the contest 2:35 into the frame.

“I want to thank my trainer Ronnie Shields, who did an excellent job today,” said Morrell. “That’s what our game plan was, to be concentrated and if I didn’t get him by the end of the first round, I was looking to get him in the later rounds.”

“I’m a fighter at heart and I compete so when he stopped the fight, I was upset,” said Henderson. “But I understand, the referee is just doing his job.”

After the fight, Morrell declared his intention to face the best at 168-pounds.

“It’s David Benavidez, it’s Caleb Plant, it’s Anthony Dirrell, it’s whoever wants to get in the ring with me,” said Morrell. “I’m ready for any of them.”