Unbeaten southpaw Erickson Lubin gained a one-punch TKO of Jorge Cota in Round 4 of their 154-pound title eliminator.

Erickson Lubin lowered the boom on Jorge Cota with a single punch that put “The Hammer” on the cusp of fighting for a world title. 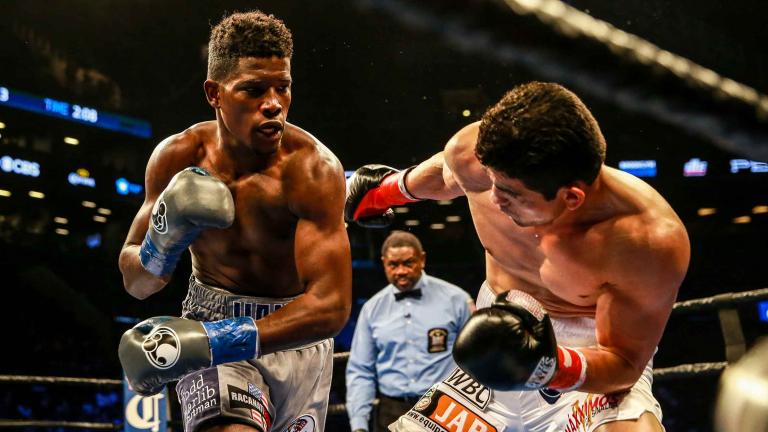 Lubin caught Cota with a devastating left hand that resulted in a fourth-round TKO in their 154-pound title eliminator at Barclays Center.

The 21-year-old southpaw was in control for the duration of the fight before catching Cota with a spectacular left to the chin that knocked the Mexican to the canvas.

Cota beat the count and rose to his feet, but referee Earl Brown didn’t like what he saw and waved an end to the bout at the 1:25 mark of Round 4.

With the victory, Lubin put himself in line to challenge Jermell Charlo for his title. Charlo, however, is scheduled to first defend his championship against Charles Hatley.

Lubin has a chance to supplant Japanese 108-pound titleholder Kosei Tanaka, who is 3½ months older than “The Hammer,” as boxing’s youngest current world champion.

Lubin outlanded Cota 50-to-32 in total punches, including a 37-to-30 edge in power shots, while connecting at a higher percentage.

Cota, who normally fights out of the orthodox stance, switched to southpaw early in the first round and stayed there most of the bout.

He was more effective fighting as a lefty, especially in Round 2 when he was able to land a couple of counter shots, but he was in a right-handed posture when Lubin caught him with the looping knockout punch.

Cota, 29, had won nine straight coming into the bout, but hadn’t competed since earning a 10-round unanimous decision over Yudel Johnson in August 2015.

Lubin, who signed a professional contract on his 18th birthday, gained his seventh stoppage in nine fights over the last 24 months.

Erickson Lubin lowered the boom on Jorge Cota with a single punch that put “The Hammer” on the cusp of fighting for a world title.

Erickson Lubin was ringside the only time Jorge Cota fought in the United States, so he’s well aware of the obstacle standing between him and a potential 154-pound world title shot.

PBC Jabs recaps a knockout weekend, chats with Thurman before he battles Garcia

This week in PBC Jabs, host Jordan Hardy recounts an explosive night of fights, highlighted by Deontay Wilder’s TKO of Gerald Washington, and checks in with Keith Thurman before his 147-pound world title unification showdown with Danny Garcia.