Former world title challenger Josesito Lopez scored a late knockdown as he swept his way to a 10-round unanimous decision over Saul Corral.

Josesito Lopez took another step forward in his comeback, just a short walk from where he earned his greatest victory. 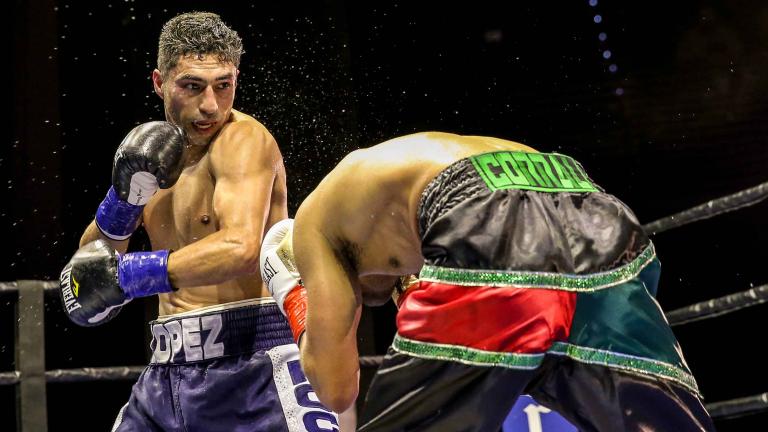 Josesito Lopez was able to wear down Saul Corral and gain a 10th-round knockdown on his way to earning a shutout unanimous decision in their 147-pound bout in Los Angeles. (Andy Samuelson/Premier Boxing Champions)

"The Riverside Rocky" worked hard to earn a clear but laborious 10-round shutout decision over Saul Corral in a 147-pound bout at The Novo at L.A. Live in Los Angeles. The downtown venue is in the same entertainment boardwalk as Staples Center, where Lopez broke Victor Ortiz’s jaw in a signature TKO win nearly five years ago.

Lopez nearly got another stoppage against Corral, dropping the Mexican in his own corner with a barrage in the opening minute of the final round. Lopez couldn’t finish the job inside the distance, however, as Corral held on until the final bell, but he swept his way to a 100-89 victory on all three judges’ scorecards.

Lopez, 32, was fighting for the just second time since hand injuries kept him out of commission for more than 20 months following a TKO loss to Andre Berto in March 2015. It was also Lopez's second fight with trainer Robert Garcia in his corner, replacing Henry Ramirez.

Lopez showed he wasn't tentative in testing those hands, letting go of a lightning-quick power combination in the second round that found the mark and backed Corral up a bit.

Despite his underdog status, Corral ended up being a formidable challenge and took the Riverside, California, native the distance. As the rounds wore on, Corral's defense began to slip and Lopez's shots begun to find a home at a higher accuracy rate.

Lopez staggered his 30-year-old opponent in the sixth, but it came with just seconds remaining in the round and Corral was able to withstand the follow-up barrage. Corral took a more defensive approach in the ensuing rounds, perhaps bothered by the damage he was dealt.

The 147-pound division is arguably the deepest in boxing, meaning a healthy Lopez could potentially find himself lined up for another marquee matchup. Against Corral, he certainly looked completely healed from the injuries that kept him out of the ring for an extended period.

Lopez continues comeback with dominating 10-round shutout of Corral

Josesito Lopez took another step forward in his comeback Sunday night, just a short walk from where he earned his greatest victory.

A hand injury and nearly 18 months of rehab put Josesito Lopez so deep into limbo that doctors encouraged him to find another career.

This week in PBC Jabs, host Jordan Hardy checks in with 154-pound world champion Jermell Charlo as he prepares for his April 22 title defense against Charles Hatley, and previews our special Sunday night PBC on FS1 card featuring Josesito Lopez vs Saul Corral.