Joseph Elegele outslugged Phil Lo Greco to earn a 10-round unanimous decision in an action-packed bout.

Joseph Elegele entered his clash with Phil Lo Greco possessing a decided power advantage, and promised to show as much when the two men got in the ring. 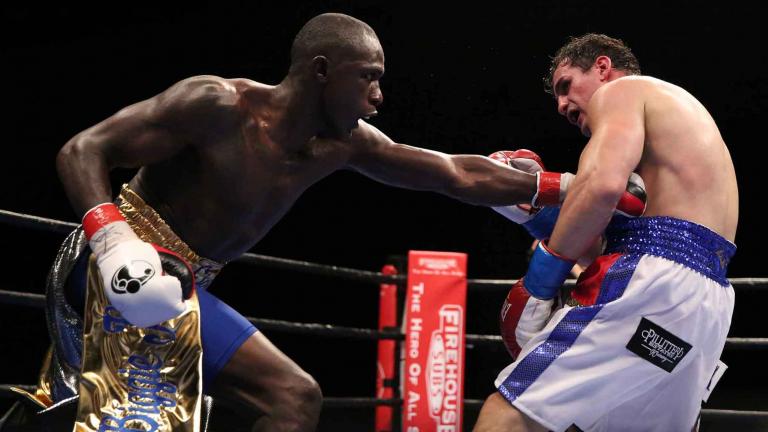 Lo Greco got a face full of his opponent’s two-fisted power for much of the fight, and even though the steel-chinned Canadian gave nearly as much as he took, it was Elegele who did the more telling damage to edge his way to a 10-round unanimous decision.

A 5-foot-8 boxer-puncher, Lo Greco (27-3, 15 KOs) actually looked like the more powerful fighter early on, rocking the 6-foot Elegele (16-2, 11 KOs) with a big left hook in Round 2. The punch sent Elegele into and nearly through the ropes, and from there Lo Greco unleashed a barrage of unanswered lefts, rights and uppercuts.

But he was unable to land the decisive blow, and after weathering the storm, Elegele actually fired back with a big punch late in the round that wobbled Lo Greco.

A 31-year-old southpaw from Melbourne, Florida, Elegele came out strong in Round 3 and began using his jab to alternately gain range and close distance, which helped set up his sledgehammer lefts to the head and body. Elegele controlled the bout in the middle rounds, doing his most damage in the sixth round when he twice hurt Lo Greco, first with a combination and later with another big left hand.

Unlike when he faced 147-pound contender Errol Spence Jr.—another southpaw with a vicious left hand who knocked him out in the third round last year—Lo Greco managed to remain on his feet the entire way against hammer-fisted Elegele.

In the end, though, the result was the same, as Lo Greco—who won his first 25 professional fights—fell for the third time in his last five contests. Meanwhile, Elegele picked up his third consecutive victory in what was the longest outing of his career.

Joseph Elegele entered Sunday’s 150-pound fight with Phil Lo Greco possessing a decided power advantage, and promised to show as much when the two men got in the ring.

As 31-year-olds in a 147-pound weight class stacked with young talent, Phil Lo Greco and Joseph Elegele are trying to remain relevant while realizing that time is of the essence.

Unbeaten 154-pound prospect Erickson Lubin has flattened 10 of the 14 opponents he’s faced since turning pro shortly after his 18th birthday, so “The Hammer” knows a thing or two about concussive power. And he knows stablemate and fellow southpaw Joseph Elegele possesses it in spades.