Erislandy Lara used his superior boxing skills to defeat Vanes Martirosyan by unanimous decision and hold onto his 154-pound crown.

Neither Erislandy Lara nor with Vanes Martirosyan were satisfied with the result of their first fight in November 2012, a foul-filled match that ended in a ninth-round technical draw after an accidental headbutt caused a deep cut under Martirosyan's left eye. 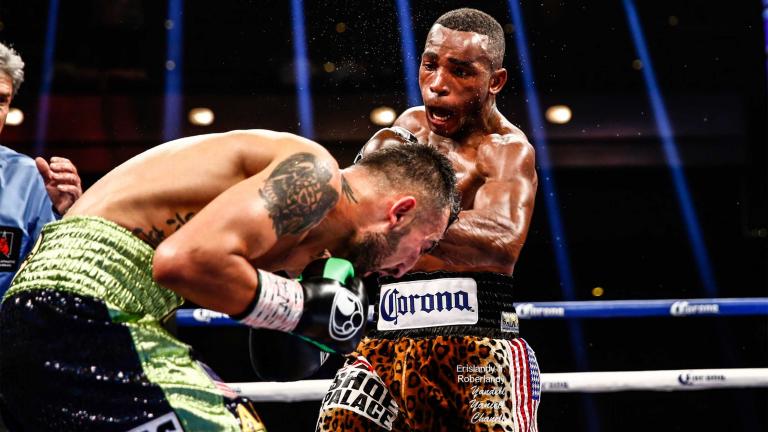 Erislandy Lara unleashes a left hand to the head of Vanes Martirosyan on Saturday. Lara needed all 12 rounds to win a rematch that was 3½ years in the making. (Stephanie Trap/Mayweather Promotions)

Their rematch wasn’t any cleaner, but at least this time, the fight had a more natural conclusion—and a clear-cut winner.

Lara (23-2-2, 13 KOs) overcame a slow start and a nasty welt on his forehead, using his superior boxing skills and defense to retain his 154-pound title with a unanimous decision over Martirosyan (36-3-1, 21 KOs).

Martirosyan’s early body attack—including stinging double-lefts to the liver—won him three of the first four rounds. But then Lara came on strong, using lead, straight and counter left hands to gain distance against the challenger.

As was the case in the first fight, there were numerous head clashes throughout the contest, one of which led to the nasty hematoma on Lara’s head. The 33-year-old southpaw also was on the receiving end of a couple of low blows as ruled by referee Vic Drakulich.

Although the second ruled low blow appeared to be right on Lara’s belt line, Drakulich deducted a point from Martirosyan. The penalty clearly frustrated Martirosyan, who was so put off by Lara’s frequent backpedaling that he mocked the champion by pretending to run in the 12th round.

In successfully defending his title for a fifth time, Lara outlanded Martirosyan,162-94 overall, with a 99-78 advantage in power shots. While Lara improved to 6-1 in his last seven fights, the 30-year-old Martirosyan fell to 4-3 since his first meeting with Lara.

This week in boxing history, PBC looks back at a pair of heavyweight legends defending their crowns, two pulse-raising bouts that were named Fight of the Year and a history-making night in the 154-pound division.

Lara takes care of business in foul-filled rematch against Martirosyan

Neither Erislandy Lara nor with Vanes Martirosyan were satisfied with the result of their first fight in November 2012, a foul-filled match that ended in a ninth-round technical draw after an accidental headbutt caused a deep cut under Martirosyan's left eye.

The last time Erislandy Lara and Vanes Martirosyan shared a boxing ring, opinions were evenly split as to who won the highly competitive yet prematurely stopped fight at Wynn Resort in Las Vegas.