Juan De Angel figured to provide Kanat Islam his stiffest test entering the matchup of steel-fisted 154-pound prospects at the Lakeland Center in Lakeland, Florida. After all, De Angel had stopped all but one man in 18 victories. 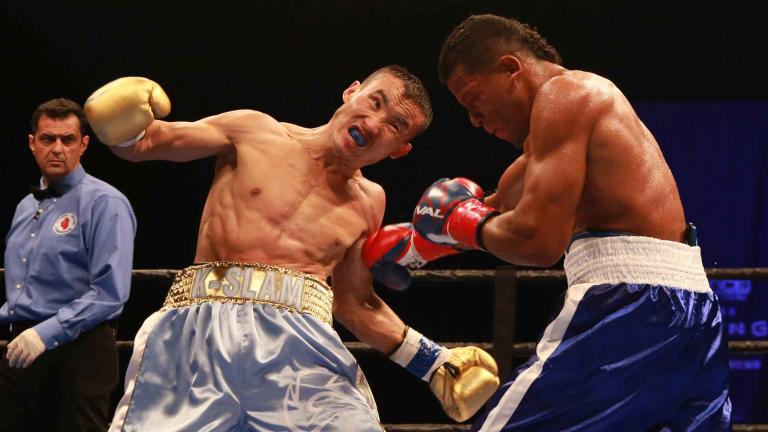 Kanat Islam prepares to unleash a left hand to the body of Juan De Angel during their 154-pound bout in Lakeland, Florida. Islam improved to 21-0 with a sixth-round TKO. (Dave Nadkarni/Premier Boxing Champions)

Looks like Islam’s stiff test will have to come another time.

Using a sustained body attack and superior mobility, Kanat Islam (21-0-1, 18 KOs) dominated Juan De Angel (18-4-1, 17 KOs) en route to a sixth-round technical knockout. Islam, 31, was just starting to find the range with his power punches when De Angel suffered an apparent right ankle injury in the sixth round and was unable to continue.

Without being hit, De Angel awkwardly took a knee with 63 seconds remaining in the sixth. The 28-year-old Colombian quickly made it to his feet, but was favoring his right leg. He elected to resume the fight, and Islam immediately went on the attack. De Angel once again crumpled to the canvas because of the injury, and this time referee Telis Assimenios waved an end to the bout at the 2:38 mark.

A China-born resident of Kazakhstan, Islam used early movement and a strong jab—often to the midsection—to position himself for counter rights and lefts. He absorbed some solid blows from De Angel as he pressed forward through the fourth and fifth rounds, but maintained control of the fight throughout and landed the more telling shots.

Islam, who won bronze for his native China in the 2008 Beijing Olympics, has now stopped nine consecutive opponents—including a disqualification victory—dating back to May 2013.

The six rounds against De Angel matched the second longest outing of Islam’s career, trailing only a ninth-round unanimous decision over Eduardo Flores in April 2013. Flores is the only boxer who has taken Islam the distance in the latter’s 3½-year pro career.

Juan De Angel figured to provide Kanat Islam his stiffest test entering Sunday’s clash of steel-fisted 154-pound prospects. After all, De Angel had stopped all but one man in 18 victories, including the previous three in a row.

Kanat Islam has plowed through all 20 of his opponents in his 3½-year professional career, but Sunday night he will be facing his most difficult rival to date in hammer-fisted Juan De Angel.

It was about eight months ago that undefeated 154-pound prospects Kanat “The Kazak” Islam and Erickson “The Hammer” Lubin sparred in Florida for about 90 seconds before Islam suffered a cut over one of his eyes.