Jarrett Hurd became a 154-pound world champion when he dropped and stopped Tony Harrison in Round 9. 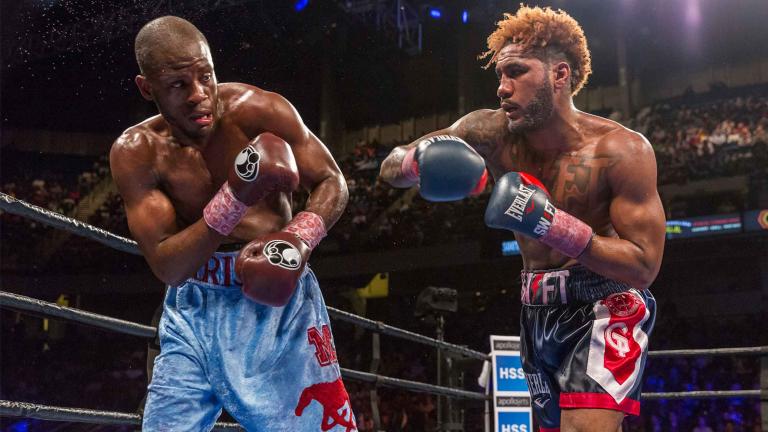 Despite appearing to have been outboxed for much of the fight, Hurd (20-0, 14 KOs) entered the decisive round actually leading on two of the three official cards. Hurd, a 26-year-old native of Accokeek, Maryland, then put an end to any suspense when he smashed a straight right to Harrison’s jaw, dropping the Detroit native flat on his back.

Referee Jim Korb reached the count of nine as Harrison struggled unsteadily to his feet. As he did so, Harrison (24-2, 20 KOs) appeared to inform Korb that he was OK to resume fighting before spitting out his mouthpiece. That led Korb to end matters at the 2:24 mark, which led Hurd to drop to his knees in exhausted jubilation.

By scoring his sixth straight technical knockout, Hurd earned the crown vacated two weeks ago by unbeaten Jermall Charlo. He did so with an ending that resembled Harrison's ninth-round knockout loss to Willie Nelson in July 2015—another bout Harrison appeared to have well in hand before getting careless.

Against Hurd, Harrison controlled the first three rounds, effectively targeting timely right hands to the head over a piston jab while using lateral movement to stay out of harm’s way. Harrison’s counter shots included a jarring third-round hook followed by a round-ending, six-punch sequence, all to the head.

Although Hurd connected on a hard left hook midway through the fourth, his fellow 26-year-old foe kept his composure, fighting off his back foot while pounding home four consecutive right hands in Round 5.

But in the sixth, an undeterred Hurd wobbled Harrison with a head-lifting, late-round right uppercut that seemed to flip the momentum.

In the ensuing two rounds, Harrison—much to his detriment—chose to stand toe-to-toe and exchange with the heavy-hitting Hurd. While he dazed Hurd into retreat with a pair of hard jabs midway through the seventh, Harrison too often retreated to the ropes over the latter stages of the final two rounds, leaving himself open for the finishing blow.

This week in PBC Jabs, host Jordan Hardy previews an action-packed Saturday night as she checks in with Deontay Wilder before his heavyweight title defense against Gerald Washington on FOX and chats with unbeaten 168-pound prospect Caleb Plant, who headlines the FS1-televised portion of a hard-hitting undercard.

Jarrett Hurd already was pumped up about the opportunity awaiting him Saturday night. And then the stakes were raised dramatically last week.

Both Tony Harrison and Jarrett Hurd were already on the verge of fulfilling their goal of fighting for a world championship leading up to their 154-pound showdown next week. Thanks to Jermall Charlo, that opportunity is now staring them in the face.