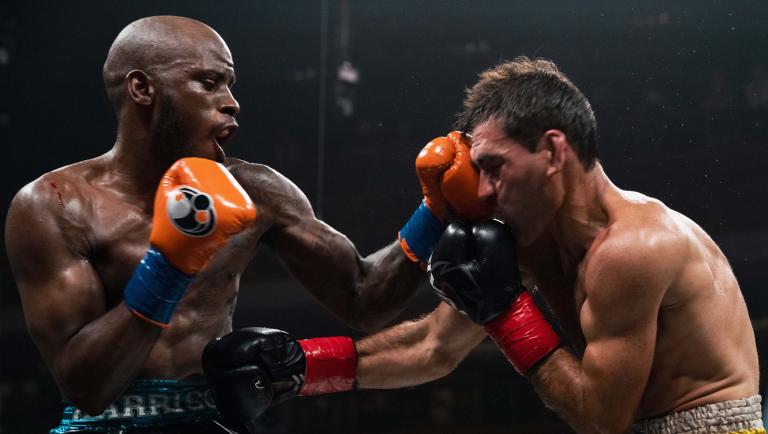 “I pitched a shutout against a guy who just fought a guy that’s in the main event right now,” said Harrison. “Muscles are the way in the street, but skills pay the bills.”

Garcia applied pressure from the outset, looking to swarm Harrison and trap him on the ropes in an attempt to become the third fighter ever to stop the Detroit-native. Harrison adjusted quickly to the tactics however, and by round four was peppering Garcia with hard jabs to stop him in his tracks again and again.

“All I needed to do was land one good punch, but I didn’t,” said Garcia. “Harrison fought his fight and was very smart with his jab and his elusiveness, major credit to him.”

As the fight progressed, Harrison varied his attack and had consistent success landing powerful blows to Garcia’s head. Harrison dominated the punch stats, connecting on 197 shots to Garcia’s 103, despite Garcia throwing over 100 more punches (592-491). Harrison’s sharpness was also reflected in his 51% connect rate on power punches.

“He was swinging for the fences,” said Harrison. “When he was missing shots, all I heard was ‘whoosh!’. I felt it. I was trying to throw a few more counter shots in between. My composure was everything.”

Garcia remained game throughout and was determined to keep coming forward until the final bell, but the veteran Harrison showed ring savvy as the Spaniard’s punches were never able to bother him. After 10 rounds, all three judges scored the fight in favor of Harrison with two scores of 100-90 and one tally of 98-92.

“I can put on a show all I want, but the bottom line is that I need wins and I have two losses in a row instead,” said Garcia. “Reality is that I’m not at a championship level yet, but I’ll keep fighting.”

“The first thing I’m going to do, I haven’t seen my kids in six months,” said Harrison. “I want to see my kids. My step two, I have a gym called Superbad Fitness. Every time it rains, it pours in the inside of my gym. My job is to find guys that can donate to our non-profit to save about a hundred kids that work out in my gym every day. That’s step number two for me. Step number three for me, I’m going to take a vacation.”