The former WBA and WBO Super Bantamweight World Champion and two-time gold medalist from Cuba is looking to chase down another world title. Read Bio 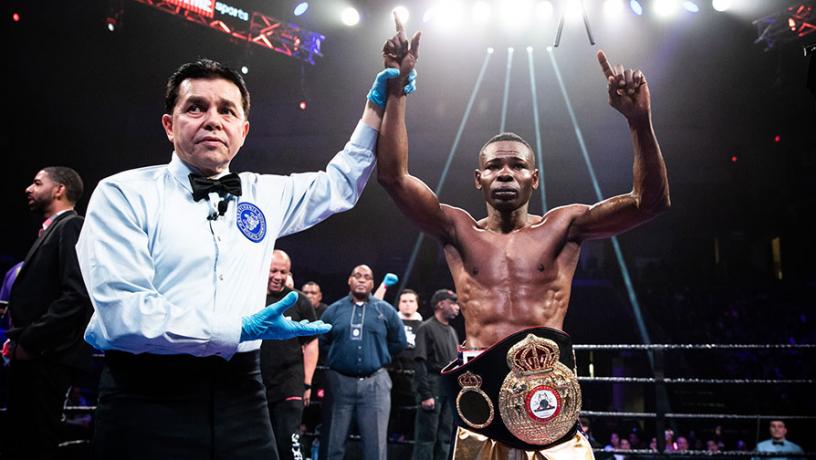 Guillermo Rigondeaux became the oldest fighter to win a Bantamweight World Title—capturing the WBA's 118-pound crown via a split decision win over Liborio Solís on PBC on SHOWTIME. 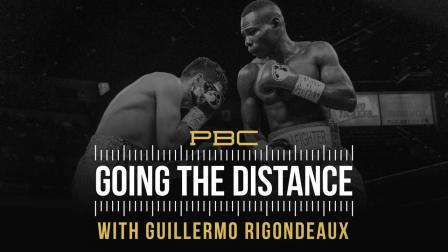 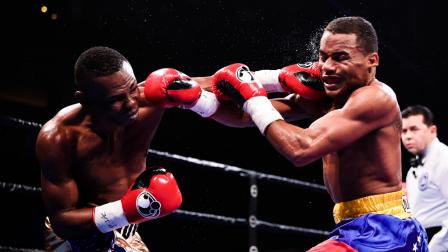 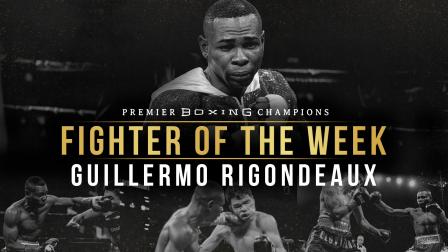 Fighter Of The Week: Guillermo Rigondeaux click here to get video transcript

The WBC World Featherweight Champion wins an intense 12-round decision over a tough Nyambayar in the main event Saturday night on SHOWTIME.

The legendary Cuban southpaw has all the motivation he needs as he prepares to battle Liborio Solis for the world bantamweight title Saturday night on SHOWTIME.

Possessing some of the finest defensive skills in boxing history, smooth Cuban southpaw Guillermo Rigondeaux has shown the ability to outbox and out brawl any challenger who steps in the ring with him. His track record is proven, from winning two gold medals to become a unified world champion.

Guillermo Rigondeaux was a seven-time national champion in Cuba, going 374-12 and winning Olympic gold medals in 2000 and 2004.

In July 2007, Rigondeaux, along with former Cuban teammate Erislandy Lara, first tried to defect while in Brazil for the Pan American Games only to be caught, returned and banned from boxing in their native country. But 18 months later, in February 2009, Rigondeaux successfully escaped Cuba through Mexico, arriving in Miami and signing with Arena Box-Promotions.

The Champ is Here

At 6-0 with five knockouts, Rigondeaux faced his first true test in a clash of lefthanders with hammer-fisted Panamanian Ricardo Cordoba (37-2-2, 23 KOs coming in) on the Manny Pacquiao-Antonio Margarito undercard at Cowboys Stadium in Arlington, Texas, on November 13, 2010.

The reigning “Fighter Of The Year,” WBO title holder and nicknamed “The Filipino Flash,” Donaire (31-1, 20 KOs coming in) was surgically dissected, befuddled by and suffered a badly swollen right eye against Rigondeaux, who rose from a 10th-round knockdown at New York’s Radio City Music Hall.

“I made him look the way he looked,” said Rigondeaux. “Which was bad, and I looked great.”

Rigondeaux looked superb as a two-belt champion opposite Agbeko of Ghana, delivering a shutout (120-108) on all three judges’ cards at Boardwalk Hall in Atlantic City, New Jersey, and rising to 17-0 (11 KOs) with stoppage victories in three of his ensuing four bouts.

Rigondeaux continued to rack up wins and defend his world titles. Desperate to prove himself against a top opponent, in December 2017, Rigondeaux rose two divisions from 122 to 130 to face then-WBO champion Vasiliy Lomachenko, who out-weighed him, 129-to-138 on fight night at The Theater in New York’s Madison Square Garden.

Rigondeaux would suffer the first loss of his career when the fight was stopped after six rounds.

“I had to reach out to a 130-pounder,” said Rigondeaux, who suffered an injured left hand and couldn’t continue against Lomachenko. “Other than Lomachenko, who else was really challenging me and would have fought me?”

Rigondeaux wouldn’t return to the ring until January 13, 2019, when he scored a vicious first-round KO of Giovanni Delgado at Microsoft Theater in Los Angeles, California.

Formerly known as “The Jackal” for his blazing hand and foot speed, power and general boxing chicanery that elicited praise as “one of the greatest talents I’ve ever seen” from his former trainer, Freddie Roach, Rigondeaux’s new motivation is his youngest of two sons who is autistic, in honor of whom he wears “Autism Fighter” on his waistband.

On February 8, 2020, Rigondeaux moved down to bantamweight and took on former chamption Liborio Solis for the vacant WBA World Bantamweight title at PPL Center in Allentown, Pennsylvania. After a rough first round, Rigondeaux settled in, outboxing Solis from the outside.

Rigondeaux scored the only knockdown of the fight by landing a left uppercut that sent Solis reeling back into the ropes. Referee Benjy Esteves justifiably called it a knockdown, and Solis survived the round. Rigondeaux would hurt Solis again in the 10th but the veteran escaped to hear the final bell. Judges Ron McNair (116-111) and Kevin Morgan (115-112) both had it for Rigondeaux, while judge Don Ackerman (115-112) scored it for Solis.

“Like I've showed everyone before, I can fight right in the middle of the ring,” Rigondeaux said. “I tried that in the first round, but after that round, Ronnie Shields told me to show him some boxing and cut the ring off. I'm available for anyone who wants to get in the ring. Who do the fans want to see me fight? I'm ready for any fighter. Now that I'm at my weight, let's go hunting.”