At the end of an action-packed ninth round, the flashy Colbert (15-0, 6 KOs) sent the WBA No. 4 ranked Arboleda (16-2, 13 KOs) to the canvas for the fourth time in his career when he caught him with a vicious left hook. Arboleda survived, but in round 11 Colbert knocked Arboleda down twice early in the round and followed up with an unanswered flurry that convinced referee Steve Willis to stop the fight at 1:37 of the penultimate round.

Colbert was docked a point for a low blow in the eighth round and at the time of the stoppage all three judges scored each round the exact same and had Colbert ahead 98-90.

The Panamanian Arboleda was the much busier fighter in Saturday’s main event, throwing almost 300 more punches (709-411) than Colbert. However, Brooklyn’s Colbert out-landed Arboleda 184-153 and relied heavily on his lightning quick hand speed and stylish defense to stymie Arboleda’s attack.

The 24-year-old Colbert, who was making his SHOWTIME debut in his first televised main event, proved that he is a legitimate threat in the talent-heavy 130-pound division.

The Brooklyn, N.Y. native Hitchins, who represented his parents’ home country of Haiti in the 2016 Olympics, used his superb jab to counteract Mendez’s power punches. The 23-year-old Hitchins landed 57 of his 198 jabs thrown compared to Mendez’s 12 of 90. Mendez landed 80 of his 256 power punches, including 44 shots to the body, compared to Hitchins’ 60 power punches landed out of 135 thrown. Mendez came on late in the fight and was more active over the second half of the bout, but was unable to overcome Hitchins’ jab.

In the telecast opener, Ronald Ellis (18-1-2, 12 KOs) was victorious by fifth-round TKO after 37-year-old veteran contender Matt Korobov (28-4-1, 14 KOs) suffered a fight-ending injury in his second straight appearance. In the fourth round, Korobov injured his left Achilles and prior to the start of the fifth round, the fight was stopped upon the advice of the ringside physician.

At the time of the forced stoppage, Korobov was ahead on two of the judges’ scorecards, with the third having it even after the four completed rounds. Over the first three rounds, Korobov landed two more punches than Ellis (22-20) and in the fourth round, Korobov upped his output, throwing a fight-high 56 punches with 11 connects.

The bout was contested at super middleweight after the 31-year-old Ellis came in five pounds above the middleweight limit at Friday’s official weigh-in. In Korobov’s last bout, he suffered a left shoulder injury and was unable to continue against Chris Eubank Jr. 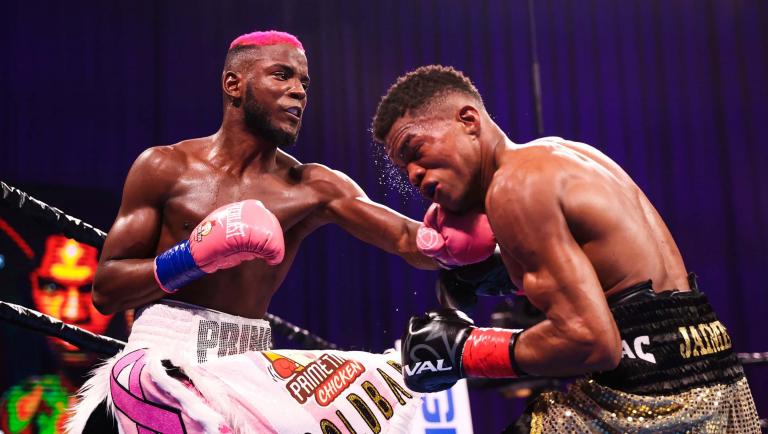