Jermell Charlo says he doesn’t hear the dubious words zip through the air and into his ears. The WBC World Super Welterweight Champion says he doesn’t care; that it doesn’t matter what the skeptics say. Yet, he says, there were doubts. There were cutting words.

What it did was build a bubbling caldron that was looking to erupt.

It did Saturday night—with a downward left jab to the body that sent Jeison Rosario writhing in pain on the canvas at 0:21 of the eighth round to unify the 154-pound division for the eighth time in history at the Mohegan Sun Arena, in Uncasville, CT, in a Showtime pay-per-view doubleheader featuring the Charlo twins.

In the first round, Charlo came out throwing wide punches. One shot, according to referee Harvey Dock, clipped Rosario. Dock ruled Rosario was knocked down with a left hook in the first half of the round. A glancing Charlo left did bounce off the top of Rosario’s head, though a replay showed Rosario’s right foot falling outside of the ring, causing the knockdown.

Rosario nailed Charlo with a couple of left hooks in the second. Charlo seemed content on boxing in the third, staying at a safe distance, pecking away from the outside. With 0:57 left in the third, Dock warned Rosario to keep his punches up, as Charlo looked irked by a left hook on the hip.

Charlo resorted back to the jab again in the fourth. Rosario dug to the body with the left hook. “Banana” also began using his jab more consistently, backing up Charlo.

At 1:41 left in the sixth, Dock stopped the action for another low-blow warning to Rosario. Moments later, Charlo responded, nailing Rosario with a flush left hook to the face that was a legitimate knockdown.

Rosario returned to his corner in a wobbly, unstable state.

Charlo showed patience in the seventh. He continued to box in the eighth. Knowing he was in control, the poised Charlo poked long jab to Rosario’s solar plexus, and the former WBA/IBF champ fell backwards, struggling to rise and wearing a look of agony as Dock reached 10. 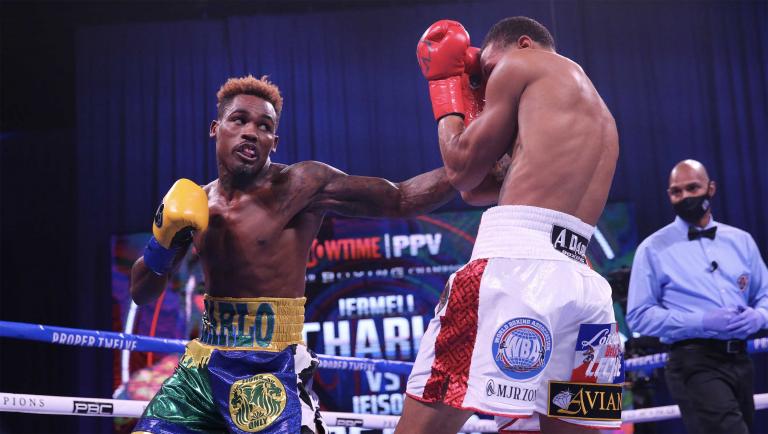 Jeison Rosario puts up his guard as Jermell Charlo attacks with a left hook.