In his first title defense, Jermall Charlo (23-0, 18 KOs) broke down Wilky Campfort (21-2, 12 KOs) without breaking much of a sweat Saturday at The Bomb Factory in Dallas.

Charlo claimed a 154-title in September by flooring former champ Cornelius “K9” Bundrage with his jab, one of four knockdowns Charlo scored on his way to a third-round TKO win.

Once again, Charlo displayed just how powerful his jab can be, dropping Campfort with it in Round 2. Campfort is at his best when coming forward and firing power punches, but the native of Haiti who fights out of Fort Lauderdale, Florida, could never get his offense going against the longer, bigger Charlo.

When Campfort’s corner implored him to throw more punches after Round 1, Campfort seemed just plain overwhelmed—and/or spooked by the champ’s devastating jab.

In a demonstration of just how fast his hands were, Charlo started pistoning his jab, then immediately hit Campfort with a left hook to the body before his opponent could even respond, landing twice before Campfort could counter once.

The numbers tell the story: Charlo scored with 21 jabs in Round 2 alone; Campfort connected with his jab a single time all afternoon—in 54 attempts.

In Round 3, Charlo once again sent Campfort to the canvas after buzzing him with a left hand followed by a hard right uppercut.

It would be another uppercut, this time from Charlo’s left hand, that would close the show in Round 4. The Houston resident landed it flush on Campfort’s right eye, causing the 31-year-old challenger to take a knee.

Campfort made it to his feet quickly, but his vision was so impaired that he couldn’t continue. As a result, referee Mark Calo-Oy called the fight, giving Charlo a TKO victory—the 25-year-old’s 16th stoppage win in his last 17 bouts. 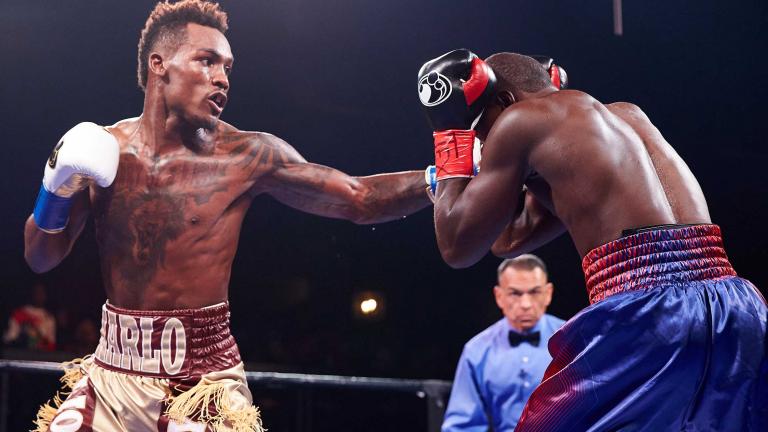 As was the case in his title-claiming victory over Cornelius Bundrage in September, Jermall Charlo was tremendously effective with his jab in Saturday's fourth-round TKO win over Wilky Campfort. (Suzanne Teresa/Premier Boxing Champions)

At a joint called The Bomb Factory, it was Jermall Charlo who brought the munitions—namely, a 20-megaton jab that cratered yet another opponent.

After skipping the turkey and stuffing this year, Jermall Charlo ready to feast on Wilky Campfort instead in his first title defense

He’s a champion now, which means many things, chiefly, no snooze alarms.

Wilky Campfort’s message to Jermall Charlo: You better be ready to fight, champ

Looks like Jermall Charlo won’t have to hire a private investigator to find Wilky Campfort when he defends his 154-pound title on Saturday afternoon in Dallas.