In a clash of rising 147-pound contenders, Kevin Bizier took the fight to Fredrick Lawson from the opening bell and punished his unbeaten opponent for 10 rounds, with Lawson failing to answer the bell after the 10th round because of a broken jaw.

Prior to his American debut against unbeaten slugger Fredrick Lawson, Canadian native Kevin Bizier insisted he wanted a stoppage victory. His reasoning? He wanted to leave nothing to chance.

The steel-chinned 31-year-old got exactly what he wanted.

Despite fighting a previously unbeaten 147-pound rival who had scored 20 knockouts in 24 career fights, the 5-foot-9 Bizier (25-2, 17 KOs) was the one who came out and established—and sustained—tempo from the opening bell.

Evenly distributing monster shots to the jaw, temple, solar plexus and either side of the 6-foot Lawson’s body, Bizier methodically worked his way to an impressive 10th-round technical knockout victory at Miccosukee Resort & Gaming in Miami.

Bizier used a pinpoint right to the chin of Lawson (24-1, 20 KOs) to score a fifth-round knockdown. It proved to be a telling shot, as Lawson later complained to trainer Abel Sanchez of an injured jaw—one that was badly swollen and apparently broken. That injury led referee Sam Burgos to wave an end to the fight before the 11th bell sounded.

By earning the victory—which the winning fighter and his trainer insisted was a must—Bizier earned a likely title shot against English champion Kell Brook.

Despite Lawson’s impressive knockout stats, it was Bizier who sprinted out of his corner and met his opponent at ring-center in the first round. Soon after, Bizier signaled a long night for Lawson with a skin-rippling left-hook body shot.

Bizier was effective with either hand from the start, landing three clean left hands prior to the end of the first, including an uppercut that made Lawson’s legs jiggle as he returned to his corner.

Proving his toughness, Lawson landed as well, but his blows were not as potent as those of Bizier, whose penchant for getting inside and getting off first kept Lawson from gaining full extension on the majority of his blows.

In the fifth round, Bizier blasted Lawson partially through the ropes, with Burgos calling it a knockdown, determining that the ropes were all that kept Lawson on his feet.

To his credit, Lawson never officially hit the canvas. But in the end, that’s the only positive the previously unbeaten fighter could take away from a bout that Bizier thoroughly dominated. 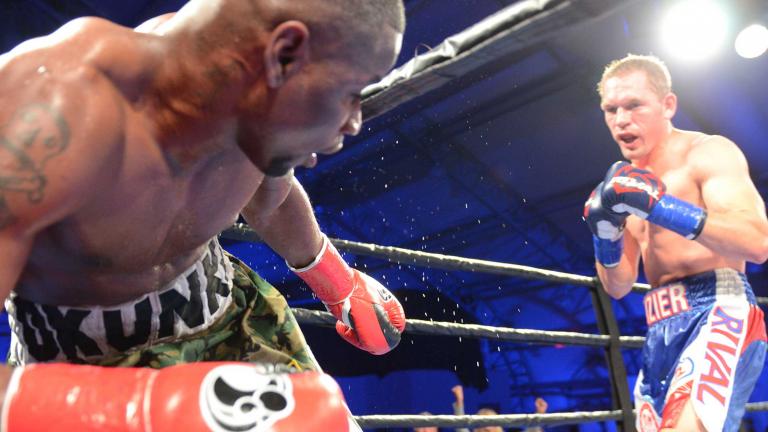 Kevin Bizier looks on after delivering a punch that sends Fredrick Lawson through the ropes, resulting in a ruled knockdown Saturday in Miami. Bizier won by 10th-round TKO. (Robert Sullivan/Premier Boxing Champions)

Prior to making his U.S. debut in Miami on Saturday night, Kevin Bizier insisted he wanted a stoppage victory against unbeaten slugger Fredrick Lawson. His reasoning? He wanted to leave nothing to chance.

The ‘L’ word rarely enters a boxer’s lexicon, especially in the days leading up to a big fight. But much like in the ring, Kevin Bizier shows no fear—and pulls no punches—when talking about the importance of Saturday’s 147-pound clash with undefeated Fredrick Lawson.

Fredrick Lawson shares an unbeaten record, a comparable knockout rate and the same trainer as 160-pound champion Gennady Golovkin. But the similarities between the two boxers end there—at least for now.