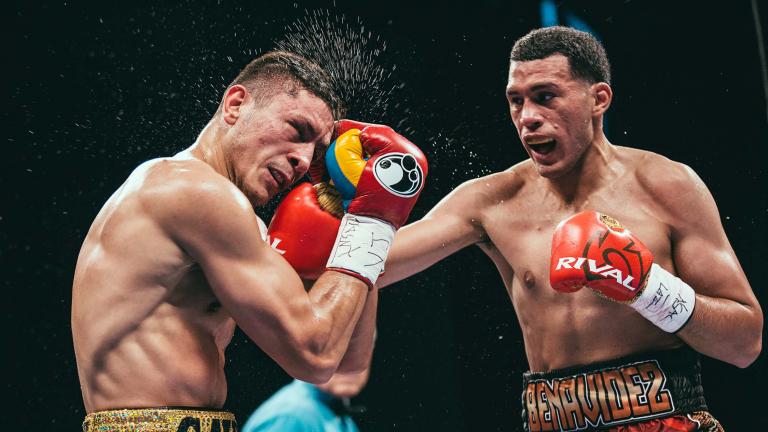 Benavidez and Gavril both gave it their all but it was Benavidez who came out on top with a split decision victory. (Rosie Cohe / SHOWTIME)

Benavidez overcame a tough challenge from Ronald Gavril, earning a 12-round split decision despite tasting the canvas in the final round. The Glenn Trowbridge score of 116-111 in favor of Gavril was overruled by the 116-111 score of Adalaide Byrd and 117-111 score of Dave Moretti. The wide scores did not represent the Fight of the Year caliber nature of the fight.

The 20-year-old from Phoenix, Arizona, became the youngest world champion in the history of the 168-pound division (and the youngest current champ), besting Darrin Van Horn by almost two years. It was for the WBC belt left vacant by Badou Jack, who like Gavril is promoted by Floyd Mayweather Jr.

Benavidez was put to the test by Gavril, a Romanian former standout amateur who proved the stage wasn't too big for him with a reputable performance. Benavidez got off to a good start but Gavril's defense improved as each round passed.

The two fighters felt each other out with measured approaches early on, but that began to change when they each found success opening up.

In the sixth, Gavril had some early success but ate a big uppercut from Benavidez towards the end of the round that hurt him a little bit.

Benavidez's output really slowed in the second half of the fight, and Gavril was outworking him with combinations. When Benavidez opened up, he shook Gavril with some good punches inside.

Perhaps it was Gavril's deeper well of experience that gave him an edge in the fight. Benavidez is still five years from reaching the age that Gavril fought his first pro fight at. When Benavidez's gameplan stopped working, he didn't know how to adjust the fight in his favor.

As the fight entered the championship rounds, Benavidez found his second wind. Halfway through the 10th, Benavidez landed a clubbing right hand that shook Gavril. Even more impressive was the left hand Benavidez landed while moving out of a clinch that Gavril initiated.

In the 11th, Gavril seemed on the verge of being stopped on his feet that Benavidez started with a looping left hand. Gavril somehow found the energy to not only fight back, but land some thudding shots of his own. Benavidez's 98 punches in the 11th was his high for the fight, in a round he had never been to before in his brief career.

Benavidez got sloppy in the 12th and paid the price when Gavril dropped him unexpectedly with a big left hand. Though it wasn't enough to swing the fight in Gavril's favor on the scorecards, it put a scare into the Benavidez fans that he may have cost himself the fight due to the mistake.

There were no losers at the end of this fight. Gavril was a long-odds underdog heading into the bout and gave Benavidez the toughest fight of his career. It certainly was entertaining enough that a rematch shouldn't be out of the question.

Benavidez has ascended to the top-tier of competition in boxing with the win. The scare against the 31-year-old Gavril should prove to be a good learning experience for the sport's youngest champion.

Youth Will Be Served: David Benavidez Looks to Future As Youngest World Champion in Boxing

David Benavidez heard the bell ending Friday’s crowd-pleasing, Fight of the Year caliber 168-pound battle, and a short time later, a hat was literally tossed into the ring on behalf of his opponent, Ronald Gavril.

In the past two decades, Sampson Lewkowicz has introduced two once-in-a-lifetime talents to the greater boxing world. Friday night, David Benavidez proved he could become the third.

David Benavidez wasn’t even born when Darrin Van Horn, at 22, became the youngest boxer in history to win a 168-pound title in May 1991. But tomorrow night, the 20-year-old Benavidez has an opportunity to make history himself in the Fight Capital of the World.