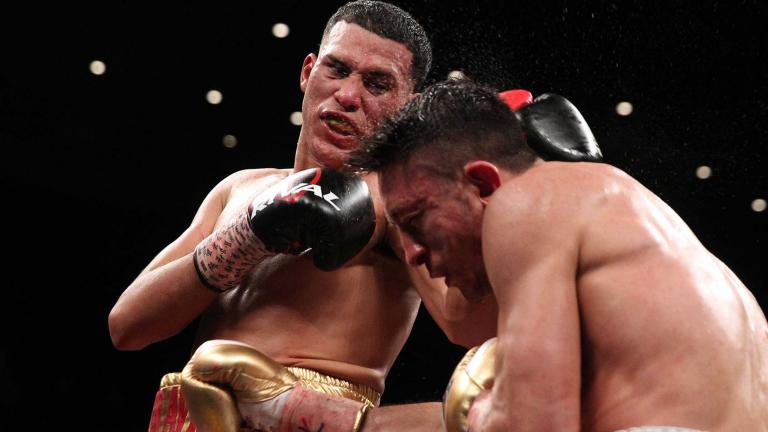 Boxing's youngest world champion, David Benavidez, left no questions in a rematch with Ronald Gavril, defending his WBC Super Middleweight World Championship with a dominating 12-round unanimous decision in Saturday's co-feature on SHOWTIME.

The 21-year-old Benavidez and Gavril had fought to a close split-decision in one of 2017's best fights that saw Benavidez drop to the canvas in the final minute of the 12th and final round.  The Phoenix native had no trouble in the immediate rematch, utilizing a stiff jab and a steady diet of combo shots to win a near-shutout over the game Gavril.

Benavidez (20-0, 17 KOs) wore down Gavril with an intelligent body attack, pounding the midsection to open up power shots and jabs to the head.  Benavidez had his best round in the fourth, connecting on a huge right uppercut that nearly floored Gavril - who appeared to be saved by the ropes - and then pounced with a series of damaging combo shots.

Benavidez appeared to hurt his right hand in the second half of the fight and stepped off the gas in the 10th, 11th and 12th.  But Benavidez, who connected on 41 percent of his power shots, still landed the harder shots and utilized a stiff left jab to keep Gavril largely at bay.

"I knew he was going to come aggressive.  He's a one-trick opponent," Benavidez said.  "I knew I could jab and box him all day.  When I saw the opening I took it.  I didn't knock him out though - he's a tough son of a gun.

"Both my hands hurt but I have that warrior's mentality so I kept pushing.

"I want to be the best in division. So whoever they put in front of me that's what I want to do."

"He tried to box me on the outside," Gavril said.  "It was good fight.  He was the better man tonight. What can I say?  I want to go back in the gym and come back stronger."

Youth Will Be Served: David Benavidez Looks to Future As Youngest World Champion in Boxing

David Benavidez heard the bell ending Friday’s crowd-pleasing, Fight of the Year caliber 168-pound battle, and a short time later, a hat was literally tossed into the ring on behalf of his opponent, Ronald Gavril.

In the past two decades, Sampson Lewkowicz has introduced two once-in-a-lifetime talents to the greater boxing world. Friday night, David Benavidez proved he could become the third.

David Benavidez wasn’t even born when Darrin Van Horn, at 22, became the youngest boxer in history to win a 168-pound title in May 1991. But tomorrow night, the 20-year-old Benavidez has an opportunity to make history himself in the Fight Capital of the World.