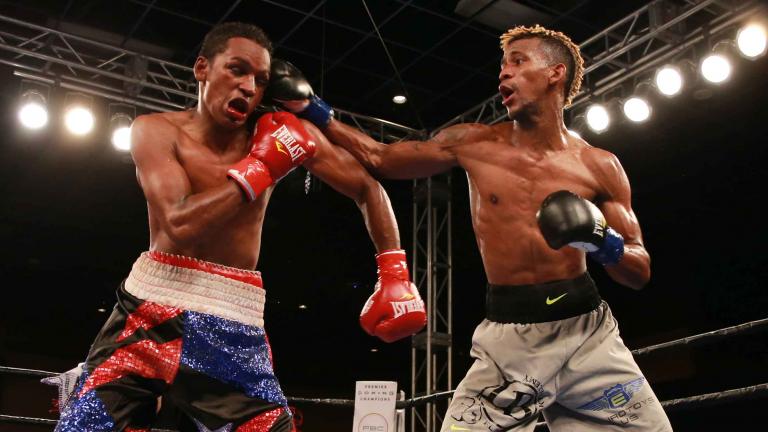 The 6-foot, 130-pound prospect remained unbeaten with a ninth-round TKO of Reynaldo Blanco in the main event of a Toe-to-Toe Tuesdays on FS1 card.

Barthelemy dazed Blanco with series of lefts to the chin in the final round and blasted through the guard to dump the Dominican Republic native to a knee.

Blanco’s cornermen pleaded with their overmatched charge to stay down, but he stubbornly beat referee Edward Collantes’ count and, for his troubles, received plenty more punishment—the first time Barthelemy came forward all night—before the corner finally waved the white towel to end the bout at 1:30 of Round 9.

Blanco was game from the opening bell, but he simply couldn’t maneuver effectively inside the Cuban southpaw’s telephone-pole jab, and withstood plenty of damage for his efforts.

Every time Blanco pressed on and attempted to work his way between Barthelemy’s long arms, the 29-year-old Dominican was met by power punches that impeded his progress.

Blanco’s biggest success came after he landed a sharp counter left hook along the ropes in Round 3 and followed up with a few scoring rights. By the end of the round, though, the momentum had already shifted after Barthelemy belted Blanco with a right hand that shook his balance.

Barthelemy, 27, boxed conservatively from the southpaw stance for much of the fight, flicking his rangy jab out to keep Blanco at bay.

The Cuban rarely took chances, but he didn’t have to. Blanco was happy to make the fight over the first half until his face became the worse for wear, the result of all those counter shots that met their mark.

With older brother Rances, a two-division world champion who is moving up to 140 pounds, looking on from ringside, Leduan Barthelemy took the next step forward in his burgeoning career.

Leduan Barthelemy stays the course with late stoppage of Blanco

With size on his side, unbeaten Barthelemy aiming for stoppage of Blanco

With a notable size advantage heading into their 130-pound bout, Leduan Barthelemy plans on making short work of Reynaldo Blanco on Tuesday night.

Leduan Barthelemy has the pedigree of a champion boxer, and now he hopes to take another step toward becoming one himself.